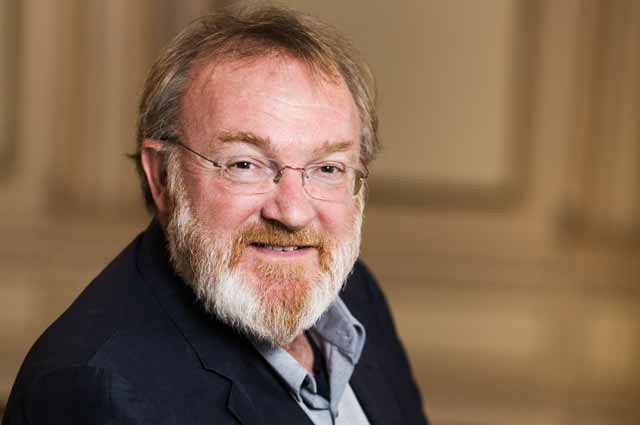 The most noticeable thing about Pavel Kolesnikov, aside from his youth (he’s 29 but looks a lot younger), is the size of his hands. When they’re simply resting on the piano keyboard, it already looks crowded. But as well as being capable of delivering some mighty hammerings, his fingers are also extremely agile, as he demonstrated in the many shadings of Tchaikovsky’s first piano concerto on Thursday evening. The piece was performed in the composer’s first revised version, so the mighty hammerings were held back for later, as the opening chords in this iteration were enjoyably arpeggiated. Kolesnikov was equally at home with the furioso passages of the two outer movements as he was with the delicate fairy footsteps of the second movement’s waltzes, and the first movement’s cadenza was full of verve, sensitivity and wit.

Martyn Brabbins directed the orchestra in a thoroughly classic performance of the work, providing a suitable foil for Kolesnikov’s changes in touch. There was plenty of rubato in the tempi, allowing for a flexible, flowing performance; highlights included a tender orchestral entry after the first-movement cadenza, some delicious comedic squeaking from the woodwind in the final movement, and a tremendous build-up to a pyrotechnic finale from both soloist and orchestra, after which the cool breath of Kolesnikov’s encore – a gentle and nuanced performance of Chopin’s E-flat Waltz – was most welcome.

Given that this year’s Proms chose to celebrate the centenary of women gaining the vote, it was surprising that the works of Ethel Smyth, a member of the suffragette movement, were not given more airing this summer, but Thursday night’s BBC concert made up for this by including her Mass in D. Joseph Barnby, the work’s first conductor, described the piece as ‘disjointed … and unnatural’, and, although this seems uncharitable, there’s a grain of truth in it. Religious music was not Smyth’s natural idiom, and while the Mass shows clear influence of the German Romantic composers, there’s a quirkiness to it. The harmonies are sometimes more angular than expected, and the orchestration feels at times too brash (the use of a snare drum in the more exuberant moments, for example). Smyth certainly followed the adage about the test of a good 19th-century composer being able to write a fugue, as the piece is awash with contrapuntal material, as displayed, at the outset, by the slowly building awkward stretto passages of the Kyrie.

Brabbins and the BBCSO were joined by the BBC Symphony Chorus, who, while sounding a little woolly in parts, gave an excellent account, which included some nicely pointed singing in the Sturm und Drang of ‘Christe eleison,’ a triumphant opening statement to the Credo, some suitably Bach-esque precise counterpoint in ‘et resurrexit’ and a charmingly sweet accompaniment to the soprano in the Benedictus. The first Hosanna (attached to the Sanctus), however, seemed to take everyone by surprise a little, and there was a bit of a hiatus in the brass at the end of ‘et vitam’.

The four soloists blended well in their quartet movements; Lucy Crowe’s soprano voice in the Benedictus was powerfully sweet and counterbalanced nicely by Catriona Morison’s firm lower mezzo register in the Sanctus. The bass, Duncan Rock, had little to do until the Gloria (in an oddly Anglican move for a Latin Mass, Smyth placed this at the end), but he has a teak-brown voice: warm and solid, but with an edge that worked well with the idiom. The tenor Ben Johnson gave a solidly lyric line over the orchestral gathering storm in the Agnus Dei, but his top register, sadly, was a little thin.