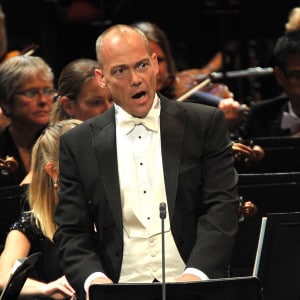 Carl Nielsen is one of 2015’s ‘anniversary composers’ (he was born 150 years ago), and the overture to his opera Maskerade not only provided a suitably breezy opener to this year’s Promenade season, but its effortlessly directed performance proved, from the outset, Sakari Oramo’s innate understanding and iron control of dynamic – under his direction, the orchestra moved effortlessly from glitteringly loud brass fanfares to the whisper of pianissimo strings.

Gary Carpenter’s Proms commission work Dadaville began, slightly depressingly, with the orchestral stuttering and twinkling percussion that became somewhat of a hallmark of late-twentieth-century orchestral pieces; but via a fascinating bluesy conversation between a baritone saxophone and a bass clarinet (a truly unusual combination), it moved to a catchy rhythmic coda for full orchestra (ending literally with fireworks – described by Carpenter as ‘a Rammstein-type pyrotechnical explosion’) which marked it out as a worthy successor to twentieth-century jazz-inspired works such as Stravinsky’s Ebony Concerto, or Bernstein’s Prelude, Fugue and Riffs.

The second half of the concert was devoted to works setting the story of the downfall of Babylon’s King Belshazzar, and ‘the writing on the wall’ at his eponymous feast. Jean Sibelius is another of this year’s Proms anniversary composers, and his little-known suite of music, Belshazzar’s Feast – from the incidental music for a play – provided an opulent mood-setter. The piece is full of the expected devices of musical orientalism – sinuous flute melodies, reed instruments playing ‘Eastern’-sounding melodies in the harmonic minor scale, the distant jingle of tambourines, a stately Oriental Procession – but somehow these avoid being clichés, and sound fresh when coming from such a stereotypically Nordic composer as Sibelius. Once again, Oramo demonstrated his ability to take the orchestra down to the merest hint of sound in the suite’s delightful Nocturne.

The star of the evening was undoubtedly Walton’s Belshazzar’s Feast, scored for pretty much everything that makes a noise: orchestra, large chorus, soloist, organ, offstage brass bands, gongs, anvil, slap-stick, and it was a triumph of a performance – Walton is meticulous in his instructions about tempi and dynamic, and Oramo followed every one of them to the letter, delighting listeners with the rhythm and syncopated sway of the piece, and providing all of the dazzle of its intended emotional impact. Christopher Maltman’s sonorous baritone-solo passages were by turns chilling and magnificently regal, but special mention must go to the joint choirs, who handled Walton’s demanding dynamic effects not only with gusto, but with great precision and commitment; their most spine-tingling moment was the menacing delivery of the line ‘yea – drank from the sacred vessels!’ which managed to convey a disquieting sense of all-too-familiar religious outrage.

The closing piece of the first half – Mozart’s piano concerto number 20 in D minor – was given a sensitive performance at a brisk tempo that set the sometimes over-romanticised central movement in proportion to the two stormy outer movements; Lars Vogt’s insouciantly brilliant playing was a delight to listen to – especially in the first-movement cadenza where he allowed space for the improvisation to breathe. The question remains, however, why anyone would imagine that such a formal and structured work could be fitted into the sensuous carnival that was the rest of the concert and not make the programming look like a mistake. Someone, perhaps, who lives in a town called Dadaville.