The BBCSO’s first concert at the Barbican for 19 months sees Brahms take centre stage once more. 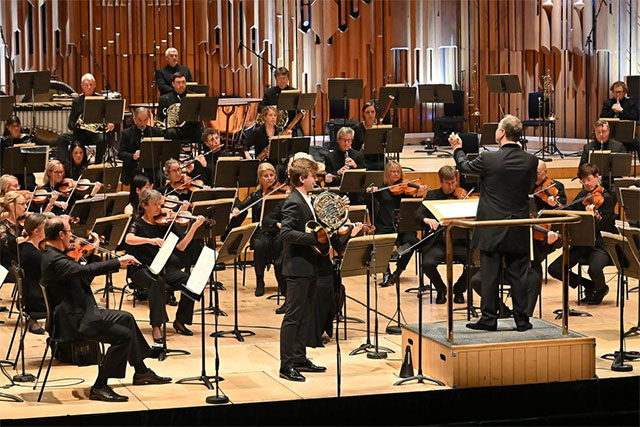 There’s an old saying that “My favourite Brahms symphony is the one I’m listening to at the time”. Of course, it could be applied to a great many things, and its real point is to highlight the importance of embracing the moment rather than worrying about league tables of greatness, or how one thing is ‘better’ than another. All the same, it seems an adage that is particularly suited to Brahms in that all four of his symphonies could reasonably be seen as representing perfection. Much as we may love the entire output of many other composers, it would be harder to claim that all of Beethoven’s symphonies were strictly of equal brilliance.

In line with their popularity, it was difficult to go for any length of time in the pre-pandemic world without a Brahms symphony popping up somewhere in London, but all that changed with COVID-19 since the resources they demand made socially distanced performances all but impossible. As a result, the inclusion of his Symphony No. 2 in D major, Op. 73 (1877) in the BBC Symphony Orchestra’s first concert at the Barbican in 19 months, which was also live streamed, acted as one of the most visible signs yet that, though the crisis may not be over, things are moving in the right direction.

The Second Symphony represents a paradox in so many ways. Brahms suggested to his publisher that it was “so melancholy that you will not be able to bear it. I have never written anything so sad, and the score must come out in mourning”. However, even acknowledging that the composer was being mischievous in describing his work in such extreme terms, it is still interesting that the first time listener is more likely to be left with the overall impression that it is quite joyous and uplifting. As a result of the enigmas that pervade every facet of piece, it seems entirely appropriate to describe this excellent performance by the BBCSO, under the baton of Sakari Oramo, as one in which the orchestra glistened and gleamed while digging deep.

“The Second Symphony represents a paradox in so many ways”

The opening Allegro non troppo was taken at exactly the right pace, so that all of the lines were delineated well. As a result, the sound felt neither too thin nor conversely descended into the type of stodgy self-indulgence that can all too easily stultify Brahms. The following Adagio non troppo similarly saw the orchestra reveal great fluidity in style as each of the variations was developed. It also made light work of the Allegretto grazioso (quasi andantino) so we could appreciate the movement’s unusual form, even as it felt like the most natural thing in the world. The unison opening to the Allegro con spirito was genuinely made to feel disturbing and full of foreboding, and by the time the movement had been completed in radiant style, one was undoubtedly left with the feeling that this performance had got the full measure of the piece.

In line with the BBCSO’s return to the Barbican the concert was subtitled A New Dawn. The name, however, would also pertain to the fact that the concert began with the UK premiere of Betsy Jolas’ Letters from Bachville (2019), which had originally been commissioned by the Gewandhaus Orchester Leipzig and Boston Symphony Orchestra. Jolas suggested that her work reflects ‘the great moments of my Bach memories, but also illustrates the way this music is so often heard today, boiled down to the opening notes of a few famous pieces, then hastily put together for both easy listening and instant interruption’. The fragments of Bach that pervade the piece are played around with, sometimes with intervals altered, and mixed with what are undoubtedly her own creations, so that the fascinating patchwork that results, which can tingle, tease and even wrong foot the listener with its sinuousness and plethora of percussion sounds, unquestionably belongs to her.

Ruth Gipps’ Horn Concerto was originally composed for her son Lance Baker, who gave its premiere in 1969 with Gipps conducting her own London Repertoire Orchestra. On this occasion, the centenary of her birth, the soloist was former BBC Young Musician finalist Ben Goldscheider. The work exploits the instrument’s lower register, and Goldscheider succeeded in producing an extremely warm and effective sound as he brilliantly tackled the first movement with its cadenza, the lively second and the duet with Elizabeth Burley on the celesta in the third. Goldscheider’s encore also involved Burley, this time on piano, as together they performed J. S. Bach’s Nun Komm, der Heiden Heiland BWV 661.

This concert will be broadcast on BBC Radio 3 at 7.30pm on 20 October.