by Sam Smith
published: 21 May 2018 in Opera and Classical Reviews
Tweet 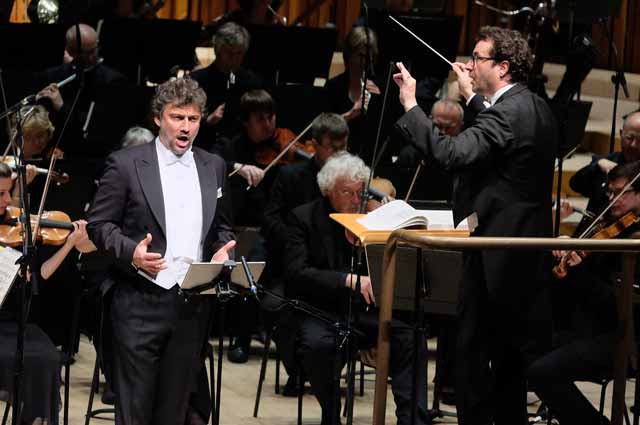 This concert was originally planned to take place in February 2017 but, when Jonas Kaufmann fell ill during his residency at the Barbican, it had to be postponed. No-one knew then that the rescheduled event would end up falling on the same day as a Royal Wedding, but the most important question for any music lover was always going to be, was it worth the wait?

The answer is an unequivocal ‘yes’ as Kaufmann’s performances of songs by Richard Strauss in both halves of the concert saw him bring sensitivity, refinement and an almost superhuman eye for detail to them. The first half featured ‘Ruhe, meine Seele, Op. 27, No. 1’, ‘Freundliches Vision, Op. 48, No. 1’, ‘Befreit, Op. 39, No. 4’ and ‘Heimliche Aufforderung, Op. 27, No. 3’, and, although each placed different demands on the tenor, overall they revealed his focus on restraint as a means for bringing out every nuance in them.

In ‘Ruhe, meine Seele’ Kaufmann showed how, even at a relatively low volume, his voice could achieve depth and broadness of sound. This manifested itself in single words such as ‘leise’ in line two and ‘Hain’ in line four, while his first declaration of ‘Ruhe, ruhe’ was so quiet that it almost seemed to evaporate into nothing. Just occasionally in the songs, this extremely measured approach might have been mistaken for hesitancy as it felt as if the tiniest of imperfections in a few syllables could have been smoothed out with just a slightly bolder approach. Overall, however, Kaufmann demonstrated impeccable precision in the variations in sound that he brought to the lines. 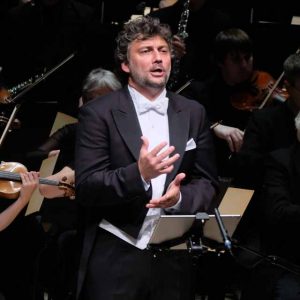 He revealed the right sense of joy in ‘Freundliche Vision’, with the song feeling profound but not overblown, and really captured the sense of progression through ‘Befreit’. The three verses were each given the individual attention that they deserve, with the cry of ‘O Glück!’ that ended each being rendered differently every time, as the second revealed his tenor at its most impassioned and expansive. His performance of ‘Heimliche Aufforderung’, in the Robert Heger orchestration, then ended the first half of the concert in superb fashion.

Although the Four Last Songs are more usually sung by a soprano, Kaufmann revealed just how well his tenor is suited to carrying them off. All of the same attention to detail that he brought to his sound in the first half was apparent, but if anything his performance in the second felt even more smooth and rounded. This may have been for a variety of reasons, but the fact that there is a greater sense in which these songs can be presented as a single entity, even though Strauss’ intended order remains unclear, could have been one of them.

The first two songs, ‘Frühling’ and ‘September’, saw single words such as ‘Gegenwart’ (the final word of the former) receive such exquisite attention that even alone they brought into play several facets to Kaufmann’s voice. The orchestra also contributed to the stunning performance by, for example, bringing impeccable balance to the foreboding opening to ‘Beim Schlafengehen’, and a beautiful sense of flow to its violin solo, courtesy of guest leader Igor Yuzefovich. ‘Im Abendrot’ then saw ‘nicht’ in ‘Dass wir uns nicht verirren’ given just a slight emphasis that spoke volumes, while even the final two words, ‘der Tod’, were given very different places in Kaufmann’s voice, thus epitomising how he explored each word to the very end.

The BBC Symphony Orchestra, under the baton of Jochen Rieder, also delivered excellent performances of several orchestral pieces. Korngold’s Schauspiel Overture was written when he was just fourteen, and to this day he remains the youngest composer to be given a premiere at the Proms. Here the orchestra proved astute at piling on the various orchestral effects to provide a strong opening to the evening. ‘Träumerei am Kamin’, the second symphonic interlude from Strauss’ Intermezzo, preceded Kaufmann’s songs in the first half, and saw the BBCSO generate the right sense of growth in fervour over the piece as a whole. Elgar’s In the South (Alassio), Op. 50, which opened the second half, is, in effect, a symphony in one movement. Here, the orchestra entirely captured the violence of the first central episode so that it provided a strong contrast to the exquisitely rendered viola solo that features in the second.