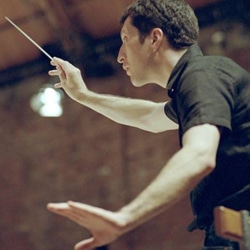 Traced Overhead, the Barbican’s Festival devoted to the music of Thomas Adès, continues to challenge and enthral the listener. Very few composers in their mid-30s are honoured by such a prestigious festival devoted to their music, but Adès is no ordinary 36 year old composer. Having burst onto the classical music scene with his fellatious opera Powder Her Face in 1995, he’s been at the forefront of his profession ever since.

Adès’ full length opera The Tempest returned to the Royal Opera in March (to maybe less ecstatic reviews than its premiere in 2004) to coincide with this Festival at the Barbican.

Programmed by Adès himself, the glittering opening concert of Traced Overhead premiered his huge orchestral work Tevot by Sir Simon Rattle and the Berliner Philharmoniker no less, but last Friday’s concert, with the BBC Symphony Orchestra under Adès’ baton, proved to be far more revelatory as a whole.

For this concert Adès had programmed four pieces which have influenced his compositional development. In some ways the opening work, Berlioz’s youthful overture Les francs-juges, seemed a strange choice, but with his typical idiosyncratic scoring Berlioz weaved his usual magic and with plenty of baleful brass outbursts it became clear why Adès had chosen this work, because when we reached the concluding piece, his own America A Prophecy, such brass interjections were integral to the work.

We then heard an exquisitely voiced rendition of Sibelius’ Luonnotar by the soprano Rebecca von Lipinski. The colour and scoring of this enigmatic ‘incantation of the birth of the universe’ was an aural cyclorama of colour and, dare I say it, brought to mind some of Björk‘s more eccentric forays into the world of classical music. Strange, other-worldly, Luonnotar is one of those pieces that begs repeated hearings.

The first half of the concert concluded with Charles Ives’ Orchestral Set No.2. I must confess to finding most of Ives’ output intractable, with its strange dissonances, bizarre orchestration and everything happening in conflicting time signatures but the orchestra coped well with everything Ives threw at them. However, I still think much of his work sounds like Les Dawson playing the piano.

After the interval we were on surer ground with a blazing performance of Stravinsky’s Symphony of Psalms. With a spare orchestral palette that eliminates violins, the rhythmic thrust of this work was ideally captured and the BBC Singers gave their full-throated all.

All this flowed naturally into a performance of one of Ads’ most thrilling, yet chilling works: America A Prophecy. Written as a Millennium commission for the New York Philharmonic, from the outset this work has courted controversy. Thought to be unnecessarily pessimistic, the work was to take on extra resonances after the events of 9/11 as it deals with the Spanish conquest of the Mayan people in the Yucatan peninsula. Adès’ music is ambiguous are the Mayan’s being suppressed or enlightened by the conquest?

In many ways it’s up to the listener to decide but what you can’t escape from is the seer-like delivery of the text by the wonderful mezzo-soprano, Susan Bickley, for whom the work was written. “Oh my nation prepare. They will come from the east, they will burn all the land, they will burn all the sky your cities will fall prepare.” It’s not hard to see why this piece has taken on an added poignancy. Brilliantly scored, wonderfully played, for me, at least, this stands as one of Adès’ most compelling works. The only slight reservation was that the BBC Singers had trouble being heard, but that is only a small niggle in what was a tremendously intelligent and thought-provoking concert.