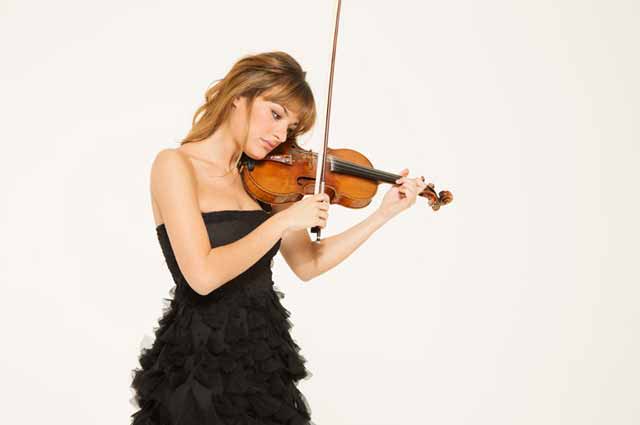 Elgar’s Violin Concerto, a beast of a work, is one of the longest in the standard repertoire. Clocking in at around 50 minutes, it requires an almost indecent amount of dexterity from the soloist and an ability from the conductor not to submerge the solo violin lines within Elgar’s dense orchestration. It’s a difficult balancing act that wasn’t always achieved at this performance, which came across more as a work in progress than the finished article.

Nicola Benedetti has only recently added this work to her repertoire, but has many more dates with Elgar’s ambitious concerto in the pipeline, so the sense she was still trying to get to the heart of this masterpiece was evident in her hesitancy to allow the main themes of the first movement to sing out. It felt as if she was holding back, playing safe, which was the exact opposite to the way conductor Sakari Oramo was encouraging the BBC Symphony Orchestra to produce more volume. Rapport between him and Benedetti was sporadic, and often felt more like a battle of wills than a process of collaboration.

After an uneven first movement, things settled down in the Andante, when Benedetti visibly relaxed, spinning Elgar’s long melodic lines with real feeling and pathos, and her performance came into focus. It helped that Oramo and his players provided the kind of support that had been lacking until then.

The fiendishly difficult bravura passages in the final movement held no fears for Benedetti, playing the demanding double-stopping and intricate finger work without turning a hair, and her confidence grew. She deftly handled the quiet cadenza, spellbindingly accompanied by a string tremolando, before making light of the exhilarating coda. The moments when Benedetti’s technical skill shone through gave notice she will soon have all this work’s demands well within her grasp.

Many commentators have noted that Dvorák’s 7th Symphony is influenced by Brahms’ Symphony No. 3. True, Dvorak heard a performance of the Brahms in 1884, yet there were also several factors at play in Dvorák’s personal life which were to make their mark on his latest symphony. He sub-titled it ‘From Sad Years’ and it is sometimes referred to as ‘The Tragic’ – this is because it was written in the months following his mother’s death.

A sense of bereavement underpins the entire work which is evident from the very start – a barely audible drum roll supported by basses and horns in the key of D minor. Oramo deftly handled this atmospheric opening, going on to sustain tension and teasing out Dvorak’s motifs as they weave their way through the orchestra from every department. Climaxes were bold, assertive, yet never brash.

The folk-like hymn which begins the slow movement was lovingly sculpted by the woodwind section with some exceptional playing throughout by Jonny Roberts on oboe and Richard Hosford on clarinet. They had more opportunities to shine than usual, as Oramo chose to restore 40 bars of music Dvorák cut from the premiere in 1885. Although it provided an excuse for some virtuoso playing, whether the overall structure of the symphony gained anything is debatable.

The scherzo had a wonderful lilt to it, with Oramo emphasising the rhythmic ambiguities, while the final movement, which begins with an ominous theme on the cellos, which again suggests a feeling of loss, had immense drive and was at times viscerally exciting, bringing this performance to a rousing climax.