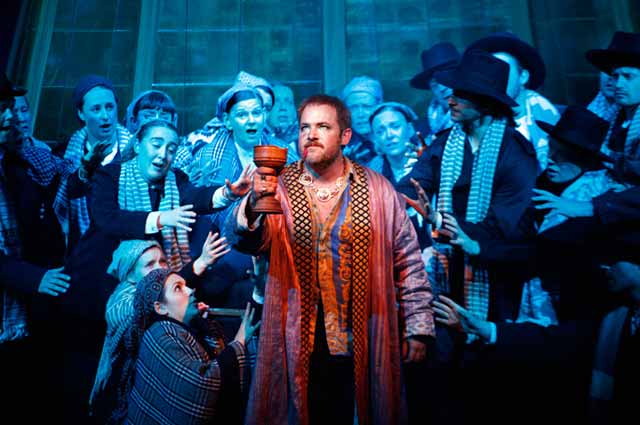 After a deeply moving, finely sung Le nozze di Figaro and a gloriously staged, superbly cast Falstaff, this production of one of Handel’s finest oratorios confirms The Grange Festival as the star of the Summer’s country house offerings. This is a remarkable achievement for a Festival in only its third year, and it’s revealing to look back at the beginning, when Michael Chance took over amidst murmurs of ‘Oh dear, what does a singer know about directing a festival?’ A great deal, it would appear, including how to attract superb casts and programme with imagination.

Belshazzar is a challenge to stage, given its contrasts between licentious behaviour by the Babylonian king and his followers, and the pious sobriety of the Jews and their leader. Daniel Slater solves this problem brilliantly, making use of the theatre’s revolve to show the two parts of the ‘tower of Babel’ – clearly based upon the painting of it by Pieter Breughel the Elder – and managing the cast and chorus so that we are always involved with whichever ‘side’ happens to be presented.

Slater’s production and Robert Innes Hopkins’ designs are distinguished but the brilliance of the evening chiefly rests with the combination of the Grange Festival Chorus and The Sixteen; celebrating its fortieth year, Harry Christophers’ ensemble achieved a rare perfection here, every choral scene featuring magnificent singing and truly remarkable movement. Switching seamlessly between fearful prisoners and lascivious hangers-on, this sublime combination of the two groups was not only original but genuinely revealing.

Robert Murray’s Belshazzar steered that very fine line between undue histrionics and credibility very skilfully, and made it possible for one to believe that this personable young tenor was actually a very bad man indeed. His singing was both powerful and beguiling.

Christopher Ainslie’s countertenor is beautiful if a touch under-powered for the role of Cyrus, but he presented the conflicted hero with style. James Laing was a forceful Daniel, singing mellifluously and creating a powerful presence – it was a bit disconcerting to see that this character and the Queen seemed to have fallen into each others’ arms, to put it delicately.

Claire Booth was having a rather uncertain night, with some pitch problems, but she never failed to show the complex nature of the troubled Queen. It was a little odd that she appeared at the start to be either mourning her dead husband, who does not feature in the story, or bewailing the death of her son ‘in advance.’

Henry Waddington is always a sympathetic presence, and his Gobrias was genuinely moving in his desire to destroy Belshazzar in revenge for the murder of his beloved son.

Harry Christophers directed the Orchestra of The Sixteen with his customary flair, relishing both the grand choral numbers and the more intimate conflicts. There was some especially fine work from the Theorbo (David Miller) and oboes (Hannah McLaughlin, Catherine Latham). To see and hear an orchestra and chorus in such unison is a special pleasure.

Both Figaro and Falstaff are sold out for their remaining performances, but there are as few seats left for the two July evenings of Belshazzar. It’s an experience worth having, especially when it comes with a stunning landscape and a remarkable house.