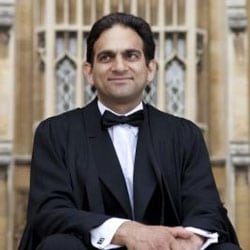 This concert, promoted by St Johns College Cambridge in conjunction with the London Womens Clinic, celebrated the quincentenary of the founding of the college by Lady Margaret Beaufort in 1511. Featuring the world-renowned college choir and the Philharmonia Orchestra, the concert also showcased some of Cambridges other best mixed-voice college choirs, as well as works by some of Johns most famous alumni composers.

Opening with Elgars concert overture, In the South (Alassio), the orchestra, under the expert baton of conductor Andrew Nethsingha (one of the few conductors who is able to successfully direct both orchestras and choirs), explored the composers lavish score. A sentimental viola solo was played with just the right level of wistfulness, later matched beautifully by the French horn. The orchestra as a whole, however, did not display the same amount of enthusiasm for the Elgar as they did for the Parry and Walton works later in the programme the slower sections occasionally lapsed into lethargy, and the fast sections werent quite as convincing as they might have been.

The Choir of St Johns College then performed three a capella compositions two by Herbert Howells and one by Jonathan Harvey, both themselves former Johnians. Howells One Thing I Have Desired set the choral tone for the rest of the evening the choir performed this with excellent diction and an energised full-choir sound, with a particularly beautiful blend between the trebles and the countertenors. An impressive range of emotion was conveyed by the singers both through their sound and their facial expressions.

Harveys I Love The Lord a brave choice in this otherwise mostly conservative English programme showed off the subtle dynamic nuances for which this choir is so famous. Two perfectly blended vocal quartets were offset against the full choir to highlight some incredibly subtle overtones within the semitone clashes, and two excellent treble soloists negotiated Harveys chromatic writing with perfect ease. This is a difficult piece to perform outside of the reverberant acoustics of a chapel or cathedral, but it worked extremely well.

Returning to more familiar territory with Howells A Spotless Rose, the choir here displayed excellent breath control and exquisite dynamic details. The male solo, so often done by gravelly baritones, was here taken by a young singer possessed of a crystal clear sound and excellent diction, and the balance between the soloist and the choir was superbly negotiated to create an absolutely magical atmosphere.

For Hubert Parrys I Was Glad and Waltons Belshazzars Feast, the singers were joined by the choirs of Jesus, Trinity, Clare and Caius Colleges. The excitement by the warm-blooded tone of the combined Cambridge sopranos was evident from the first entry in the Parry, and the massed choirs produced a well-blended, exciting sound, fresh in approach and dynamic in performance. This energy level was more than matched by the supporting orchestra, with some particularly moving playing from the string section.

It was in the Walton, however, that each contributing ensemble came into its own, particularly the orchestra, who more than made up for their apparent lack of enthusiasm for the Elgar. The opening of Thus Spake Isaiah, scored for male voices, contained the appropriate amount of gravitas particularly impressive considering young age of the participating singers. The choirs energy rose to prominence several times in this vocally demanding piece nowhere was this more apparent than in the fourth movement, Praise Ye, where the excitement was lifted even more by the brass choirs to the sides of the stage. This excitement was carried through to the dramatic end of the fourth movement, with excellent ensemble within the newly energised orchestra during their accelerando and crescendo to a dramatic, poignant silence. The orchestras virtuosity was also apparent in the seventh movement, Sing Aloud to God, featuring some extremely impressive trumpet figures as well as some dazzling string passages.

Baritone soloist David Stout gave a dramatic, animated performance, with a solid and well-rounded (if occasionally underpowered) sound. The choir of St Johns came to the fore again in the semi-chorus of the eighth movement, The Trumpeters and Pipers are Silent, where the ethereal quality of the treble sound provided a beautiful contrast to the full choir, and the smaller choir allowed for greater dynamic expression in this largely a capella section.

This was an excellent programme, allowing the Choir of St Johns College to take centre stage, but also allowing several orchestral sections to shine and giving the massed mixed choirs a chance to perform larger choral repertoire in a larger concert venue than they are used to a challenge to which they rose, performing with joy and conviction. The evening was a fitting tribute to the colleges five hundred years of existence, and the perfect showcase for its excellent choir.