Online music resumes from the Barbican featuring a virtuosic pianist. 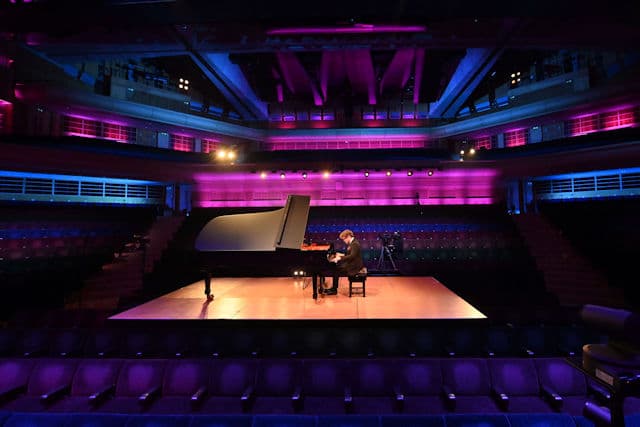 It was a pleasure to see the Barbican’s live-stream concerts re-starting on Saturday evening with a recital by pianist Benjamin Grosvenor. The programme was advertised as ‘a delight for Romantic piano-lovers’, which felt slightly off-base as the pieces performed – Liszt’s arrangement of Schubert’s Ave Maria, Chopin’s third piano sonata, Ginastera’s Three Argentinian Dances and Ravel’s Gaspard de la Nuit – sit slightly uncomfortably with the concept of either romantic or Romantic piano music; this was hardly an evening of lush Brahms and Rachmaninov, but a distinctly more intellectual take on ‘romantic’.

Which was just as well, as Grosvenor is far from a florid performer: his style is exacting and fiercely concentrated; there are no flamboyant gestures and little body movement; he plays without a score, giving all his attention to the keyboard, his hands, and lower arms, where all the energy is concentrated. Indeed, his encore piece, Godowsky’s arrangement of Saint-Saëns’ Le cygne was an apt metaphor for the performance – plenty of movement where it counted, but near-serene above the waterline. His approach to all of the pieces showed a masterly understanding of their construction and their idiom, and while there was plenty of musical gesture, none of it – even the obviously saccharine arrangement of Ave Maria – felt in the slightest overblown; this was all about the composers, not the performer.

Nowhere was this more evident than in Grosvenor’s account of Chopin’s third – and most complex – piano sonata. While it is easy to lump Chopin with the later Romantics, one must remember that he was 17 when Beethoven died, and his music, while intended to stir the emotions, is not as full of the richer tropes that chromaticism brought, and there is a delicacy to it. All of this Grosvenor brought to his account: the brusque opening statements and contemplative development of the opening movement; the light and busy bubbling of the Scherzo (whose trio was given solidity without mass); the wistful wandering Largo (where the playing, in a startling whizz to the future, might almost have been for a piece of Debussy); the controlled hammer-work, carefully observed dynamics and precisely executed runs of the Finale.

“…his style is exacting and fiercely concentrated…”

Ginastera’s three portraits of distinctly South-American characters in his Three Argentinian Dances were meticulously painted in style and expression. One of the advantages of a broadcast piano recital is the ability of the camera to concentrate on the keyboard, and thus we saw the discomforting bitonality of ‘el viejo boyero’ (black notes in the left hand, white notes in the right). The sultry zamba, full of dynamic shifts, for ‘la moza Donosa’ was elegantly delivered (and the final pianissimo of the last melodic statement saw the Donosa girl shimmy off into the distance with a seductive smile). The unpredictable Latin-jazz that represents ‘el gaucho matrero’ (the outlaw cowboy) requires a furious dexterity to bring it to its carnival ending, and Grosvenor did not disappoint.

The three movements of Ravel’s tone poem Gaspard de la nuit demand a great deal from a pianist, and it is no secret that the final, virtuosic ‘Scarbo’ was a deliberate response by Ravel to the technical challenge of Balakirev’s Islamey. We were, however, in Grosvenor’s sure hands, and the moods of the three movements were expertly portrayed with analytical brilliance. ‘Ondine’ was given the laciest of openings with some sure-fingered cross-hands work; the dead landscape, haunted by the tolling B-flat bell of ‘Le gibet’ was full of near-emotionless wandering; the slight pauses that intersperse the rapid flicks of busy fingering in ‘Scarbo’ were masterfully timed to intensify the moody depiction of this strange, sinister, jerkily moving creature.

The recital is available here