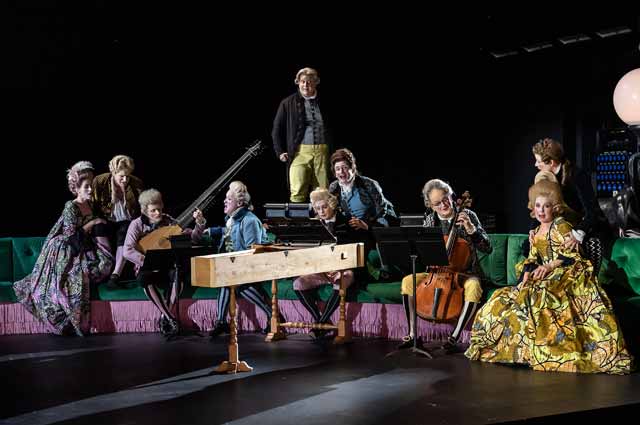 The Royal Opera’s beautiful new Linbury Theatre is worthy of a visit in itself, no matter what is being staged, just so as to experience its warm, ultra-sympathetic acoustic. When Handel is being performed, you have something close to perfection despite the longueurs of Berenice and the fact that you can’t help hearing bits of Xerxes and other works dotted about in the score.

After having attended a rehearsal of Berenice, the Earl of Shaftesbury commented that “…the first act is full of exquisite genteel airs and quite new. The second is more in the great taste and may (I think) properly be called sublime… The third act… is a mixture both of great and pleasing…” Most of us today would probably not lavish such praise on the work, but it is a natural follow-on to be staged here, after the hugely successful Solomon in the main house. Selma Dimitrijevic’s adaptation and Adele Thomas’ direction are vivid, often funny and always alert to the demands which Handel makes of his singers.

The ‘stars’ of a pretty stellar line-up are Laurence Cummings, who directs the London Handel Orchestra with his customary true Handelian style, and Jacquelyn Stucker, whose Alessandro was so convincing that someone asked if that character was being sung by a boy. Jacquelyn is something of a polymath, in that she is a Doctor of Musical Arts and a professional translator as well as a fine singer. Her stage presence is as strong as her voice, so it comes as a surprise that she is still so young – definitely one to watch. 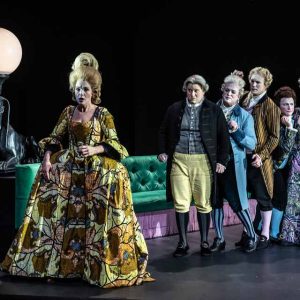 Alessandro Fisher was not far behind them in excellence, with a finely nuanced tenor voice and plenty of acting aplomb. Claire Booth and Rachael Lloyd made a feisty pair of sparring sisters in this tale of love and politics, each vying with the other to sound out Handel’s challenging lines with the most clarion sound. Patrick Terry’s Arsace and James Laing’s Demetrio may have been new voices to many, but these two young countertenors will definitely be household names amongst those who appreciate this voice type. William Berger completed a fine cast with his pliant baritone and witty acting.

An added delight was the on-stage continuo, provided by Jonas Nordberg (Archlute), Oliver John Ruthven (Harpsichord) and Mark Caudle (‘Cello). As well as giving sprightly support to the singers, this trio was a part of the action, frequently making witty comments via facial expressions and greatly adding to the fun of the lighter moments.

If you loved Katrin Lea Tag’s designs for Barrie Kosky’s production of Saul at Glyndebourne, you’ll certainly appreciate Hannah Clark’s stage picture here – it’s not so busy overall, but has the similar elements of a long banquette and lavish flowers, both of which allow the singers plenty of variety of movement as well as forming a pleasing backdrop to the action.

Most significantly, Adele Thomas’ direction ensured that the singers were allowed to concentrate on producing Handel’s lines; for example, Alessandro’s ‘Mio bel sol’ – exquisitely sung by Jacquelyn Stucker – and Demetrio’s ‘Selene, infida,’ superbly done by James Laing, are both arias where the temptation to direct singers to engage in convoluted actions, must be strong, but it was resisted so that it was the singing which was truly memorable.