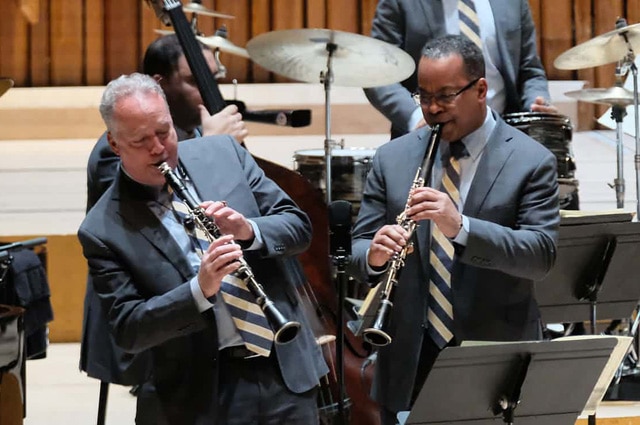 The Jazz at Lincoln Center Orchestra is one of the Barbican’s International Associates, and this concert of music by Leonard Bernstein, whose centenary falls this year, showed exactly why it enjoys the same official standing as the New York Philharmonic and Leipzig Gewandhaus.

Around two thirds of the programme was devoted to pieces from the composer’s musicals Candide, West Side Story, Wonderful Town and On the Town, while all of the songs were arranged by Richard DeRosa, Vincent R. Gardner, Victor Goines or Carlos Henriquez (the latter three also performed in the concert). The success of each arrangement, however, depended on how well the original piece lent itself to being performed by a predominantly brass orchestra.

The concert’s music director, Gardner, explained how both Gershwin and Bernstein were heavily influenced by jazz with Bernstein, in this respect, seeing himself as following in the footsteps of the older composer. This does not mean, however, that everything he wrote was in a style that lends itself to a jazz approach. For example, the overture to Candide, which opened the evening, is ultimately an orchestral overture in which it is the wide variety of instruments that create all of the necessary colours. Here, the brass delivered the opening fanfare very effectively but the tumbling rhythms that soon follow felt far too linear. Perhaps because the piece was not a natural fit to begin with, the arrangement, and particularly the two improvised solos by trumpeter Wynton Marsalis and tenor saxophonist Goines, sometimes seemed to have little to do with the source material. Nevertheless, no-one is likely to have complained at the solos, given the sheer quality of sound and expression demonstrated in them, while the arrangement still arguably prevailed precisely because of its inventiveness.

In the first half, ‘Cool’ from West Side Story and ‘Conversation Piece’ from Wonderful Town felt more natural fits for the orchestra. The former sees gang leader Riff instructing the Jets on how to act cleverly, and so lends itself to the idea of them asserting their own rhythm and pace. This arrangement saw these two elements varied to quite a degree as the piece came to a virtual standstill at one point before drummer Marion Felder ‘interrupted’ the resulting silence to ‘beat’ the music slowly back into existence. ‘Conversation Piece’ depicts a dinner where the banter simply does not flow, and was executed well as the arrangement felt full of stops and starts, with various sections of the orchestra producing quite different sounds that implied a certain lack of ease.

It was after the interval, however, that it really felt as if we were being treated to a first rate jazz concert, and superlative performances of Bernstein’s music, with there being no conflict between the two. ‘The Dance at the Gym’ from West Side Story with its mambo rhythms fitted the orchestra like a glove, and featured another of Marsalis’ extraordinary trumpet solos. As he demonstrated both here and elsewhere, his playing does not simply reach  heights of excellence, but responds to all of the sounds going on around to a degree that is unusual even among the very top jazz musicians. His solo in ‘Lucky to Be Me’ from On the Town that followed then revealed another side to his playing altogether. The second half also showed how some of the composer’s pieces that are most related to jazz do not come from his musicals at all. As the orchestra played ‘Lamentation’ from his Symphony No. 1, ‘Jeremiah’ it proved perfectly suited to conveying the way in which the movement is as much about hope and renewal as it is sadness and loss. The ‘Gloria in excelsis’ from his Mass which followed also possesses a rhythm that is very common in jazz.

The main programme ended with a medley comprising ‘Touches’, originally a series of variations for piano, ‘Lonely Town’ and ‘Somewhere’, and finally a performance of ‘Some Other Time’. The encore was a quintet arrangement of George and Ira Gershwin’s ‘Oh, Lady Be Good!’, which worked well because it enabled us to experience greater levels of ‘jamming’ from just five players, while ensuring that our abiding memories of Bernstein from the evening still came from hearing the entire orchestra in full swing.