by Melanie Eskenazi
published: 1 May 2010 in Opera and Classical Reviews
Tweet 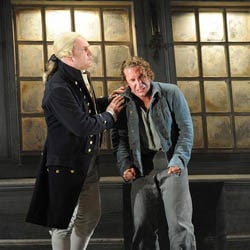 This stupendous production of Billy Budd, brilliantly cast, evocatively staged and deeply satisfying, reflects Michael Grandage’s vast experience of theatre and his desire to explore what he has described as ‘the extraordinary depth of character in the piece.’ You can only achieve that with the best material, and in John Mark Ainsley’s Captain Vere, Jacques Imbrailo’s Billy Budd, Iain Paterson’s Redburn and Jeremy White’s Dansker, the director has given us four portrayals which must now be the gold standard.

This is very much Vere’s story, and Ainsley tells it with the commitment, intelligence and sensitivity you would expect from him, the singing always true in pitch, emotionally complex in phrasing and achingly felt in tone. Ainsley and Grandage have worked together to create a Vere as enigmatic, tormented and yet utterly believable as one can conceive: from his first ‘I am an old man’ to his final reflections on how Billy ‘saved’ him, (with that unforgettable image of the vast hulk of the ‘Indomitable’ sailing away just as the burden is falling from Vere’s shoulders) this was a tremendous performance.

The relationship between Billy and Vere is weighted with expectation, and Grandage seems to have gone back to Melville for his understanding of its crucial moments ‘The austere devotee of military duty may in the end have caught Billy to his heart even as Abraham may have caught young Isaac on the brink of resolutely offering him up’ there was no actual ‘catching to the heart’ but such was the power of the director’s management of emotion that you felt it, as it were, in the spaces between the characters.

Jacques Imbrailo was a very winning Billy, with lyrical/rugged looks as well as the required aura of innocence – what Forster called ‘the goodness of the glowing aggressive sort which cannot exist until it has evil to consume.’ His voice has an engaging, melting quality his ‘Billy in the Darbies’ scene was one of the most simply moving solo performances I’ve ever experienced on the operatic stage. The scene where Billy is visited by his ‘old friend’ Dansker on the eve of his execution was a model of intimacy and interaction; Jeremy White’s Dansker ,both here and at the cruel moment when he has to prepare the rope, drew us in to this lovable yet restrained man’s heart. Iain Paterson’s Mr Redburn was the finest interpretation of this part that I’ve seen, and Phillip Ens was a subtly menacing Claggart, not as creepily evil as some, singing with vivid phrasing and ringing tone.

Christopher Oram’s set opts for evoking what Ainsley has called ‘the feeling that you can never really get far away enough from each other’ rather than the sense of the ‘infinite sea,’ and Paule Constable once more brings every corner of the stage to life with her uniquely painterly lighting. Mark Elder gave an impassioned, poetic reading of the score, and the LPO played fervently for him: the Glyndebourne chorus did its new master Jeremy Bines proud. In short, rare perfection.