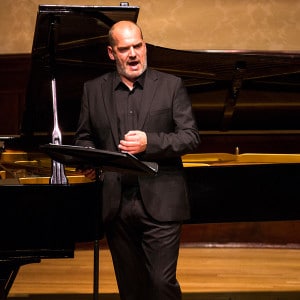 Schubert: The Complete Songs is an undertaking sure to inspire as much delight in devotees as it is to be greeted with scepticism by those less attuned to either the composer or the art of Lieder, but this massive undertaking is surely one of the best ways in which to counter the notion that the song recital might become, in John Gilhooly’s words, “an endangered species.” There was certainly no lack of enthusiasm for this inaugural recital, gracefully introduced by the Austrian ambassador and featuring one of today’s most persuasive exponents of the Lieder singer’s art.

Each of the concerts in the series is planned to give a chronological order, thus here we began with what might be called juvenilia dating from 1810, and ended with the superficially jolly ‘Das Lied im Grünen’ from 1827. Youthful attempt it may be, but ‘Lebenstraum’ fascinates by its subject, the nature of poetic inspiration, and its delicate, hesitant melodic line in which it’s so easy to discern the later composer. Florian Boesch sang it with as much love as if it had been ‘Die Taubenpost’ and Graham Johnson relished the rippling piano line of the narrative.

‘Erster Verlust’ of 1815 feels like the product of so much more than another five years of life, and here Boesch’s signature style of heartfelt communication of the most world-weary lines was ideal. ‘Der Gott und die Bajadere’ may not be everyone’s favourite song, but when sung and played like this it’s quite an experience. It tells the story of a dancing girl who is allowed to spend ‘eine süsse Nacht’ with the human form of the God Shiva: when he dies and she attempts to throw herself onto his funeral pyre, she is told that only a wife may do this – she throws herself on anyway, in defiance of the priests, and the ‘divine youth’ rises from the flames with her in his arms. The poetry is classic Goethe, the music is Schubert at his most engaging, with a mesmerizing quality to the assertions in the second part of each stanza.

‘Memnon’ was the highlight of a Mayrhofer group, with Boesch dramatically evoking the poet’s desire to be one with his art, the final ‘Ein stiller, bleicher Stern zu schienen’ phrased with understated fervour. ‘Totengräbers Heimweh’ elicited a “Bravo” from the audience – most unusual for a song which is not the final one – but justified, given that both Boesch and Johnson performed this extremely challenging piece with almost insouciant skill. ‘Das Lied im Grünen’ brought the programme to a close, its enchanting, lilting melody extolling the open air carrying a sense of the passing of the ‘grünende Zeit’ (verdant years). ‘Geheimes’ was the single encore, a little song which can be arch but which was here sung with intimate charm and gracefully played. Next in the series, Boesch with Malcolm Martineau on Thursday 24th, and Henk Neven with James Baillieu on Sunday 27th, both highly recommended.