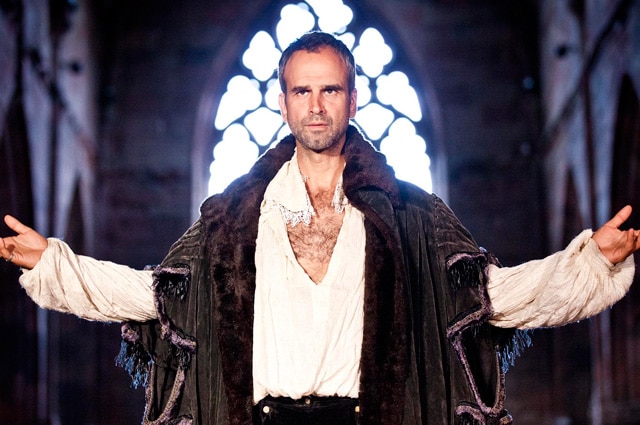 “All the music I’ve written for Him, and nothing in return!”

Thus railed Carlo Gesualdo about God in ‘Breaking the Rules’, Clare Norburn’s concert-drama, set on the last night of Gesualdo’s life, in which the composer justified his dissolute life – and particularly the double murder of his first wife Donna Maria and her lover Fabrizio Carafa – to posterity. The composer was brought to life splendidly by Gerald Kyd, who strode around the stage in his fur-trimmed princely robe, beat his breast, wept, laughed maniacally, and occasionally paused to let slip a pithy witticism.

The production, directed by Nicholas Renton, was a well-judged balance of just enough history for context, and plenty of Gesualdo’s music – taken from his latter books of madrigals, the 1603 Cantiones sacrae and the 1611 Tenebrae Responsories. The two-eras-at-once conceit (not only the idea of Gesualdo addressing a modern audience, but the anachronistic chromaticism of the composer’s music) was augmented by the architecture of St Luke’s – part 18th-century ruin, part contemporary minimalism – and complemented by the lighting effects by Natalie Rowland and Pitch Black Lighting, which included projections of the Gesualdo family chapel at Venosa, and ballo-in-maschera temptresses. Whether you are a subscriber to the theory that the twisted complexity of Gesualdo’s latter music arose from his guilt or not, the evening was a compelling set-piece, allowing the music to shine.

The music itself was given exemplary performances by the lutenist Wezi Elliott and the six voices of the Marian Consort, directed minimally ‘from the counter-tenor’ by Rory McCleery. Gesualdo’s pieces are difficult enough to sing anyway (the late-book madrigals, particularly, employ almost-chaotic polyphonic harmonies that coalesce into cadences around seemingly random notes in the texture), but The Marian Consort managed all of this with perfect blend and without a note out of place, making full use of the building – often spatially separated, walking in procession, or at a distance from the stage in the gallery. The pieces were well-chosen to point up the narrative: the drama opened with the sonorous Tenebrae facta sunt from the Good Friday Responsories, reminding us that we were witnessing Gesualdo’s last hours.

The story of the summertime death of the composer’s mother began with a light lute piece, but was followed by Tribulationem et dolentem inveni; the two sopranos, accompanied by the lute presented a perfect image of dalliance at the Ferrara court with Cor mio deh non piangete, and the story of his first meeting of Donna Maria was accompanied by Luci serene e chiare (both from the fourth book of madrigals). Gesualdo’s arguably most harmonically disturbing madrigal, Moro lasso (from his sixth and final collection) was reserved for his account of Donna Maria’s laughing at his lack of performance on their wedding night.

Amid such excellence, it was difficult to pinpoint outstanding performances, but the prize probably went to the opening numbers of the second half: O vos omnes from the Holy Saturday Tenebrae and Ave dulcissime Maria from Cantiones sacrae.

The murder itself was deftly handled. Following the fifth-book madrigal Dolcissime mia vita the lighting changed to ubiquitous red as Gesualdo blurted out the details – the confession spiced by the guilty homoerotic twist of his sudden desire for the naked Carafa. The darkest of the Tenebrae Responsories, Aestimatus sum (‘I am counted with those who go down to the pit’) followed, the singers surrounding Gesualdo and becoming his inner torment. The composer’s final moments of life were accompanied by Gesualdo’s setting of Psalm 51 (Miserere mei, Deus) the singers placing candles around his supine body as he gasped his last.