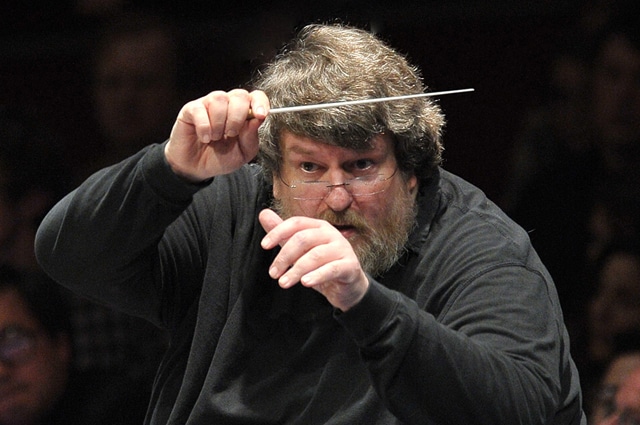 The only disappointment in this second of two concerts by the Britten Sinfonia and Oliver Knussen was that there were not enough people to enjoy it. Whereas the first concert on 25 October was witnessed by a respectably large audience at Milton Court and broadcast on BBC Radio 3 the following day, this performance only filled about two-thirds of the Barbican Hall.

That was pity, because they presented a finely balanced programme of works, superbly played by the Britten Sinfonia, and expertly conducted by Knussen. The opening work – Mozart’s Masonic Funeral Music – was played twice. Knussen jovially explained that this was because he didn’t usually get the chance to conduct “this sort of thing” and that, at seven minutes, a second hearing would enable the audience to absorb it more. This was true, and one can see why Knussen has become a late admirer of Mozart. Its dark colouring and euphonious string writing were brought to the fore under his detailed conducting.

Knussen’s own Violin Concerto (2002) was similarly directed with great precision and warmth. Written for Pinchas Zukerman and quietly influenced by the terror attacks in New York in September 2001, the concerto is lyrical and elegiac, but also includes Stravinsky-influenced neo-Baroque and Classical elements. Its three movements – Recitative, Aria and Gigue – are tightly structured and inventive. Young Dutch soloist Frederieke Saeijs did full justice to the work, playing it without a score and, after a string snapped in the final movement, swiftly swapping violins with the orchestra’s leader, Jacqueline Shave.

After the interval, Knussen and the Britten Sinfonia presented a rare Stravinsky piece – his Ode of 1943. This was commissioned by Serge Koussevitzky in memory of his wife Natalie, who died the previous year. At just over ten minutes’ long, it is a short piece, and not a great one. In between the mournful Eulogy and Epitaph sections comes a rather incongruous Eclogue that recycles some jolly hunting horn music from a discarded project for a film adaptation of Jane Eyre. Still, it provided Knussen and his players with a warm-up for the tight ensemble playing of Michael Tippett’s Concerto for Orchestra.

As an 11-year-old, Knussen attended the premiere of this 1963 work with his grandmother at the Edinburgh Festival, and it clearly made a strong impression. It is a brittle, hard-edged composition that reflects Tippett’s mid-career stylistic changes and recalls the ascetic characteristics of his opera King Priam, which was premiered in 1962. More than other similarly titled works by Bartók or Lutosławski, for example, this really is a ‘concerto’ for orchestra, at least in the Baroque concerto grosso sense. Each of the three movements are reserved for different instrumental groupings – wind, brass and percussion; strings, harp and piano; and finally all the players united in a brash Allegro. Knussen held all of these forces in perfect balance, managing to bring out playing of the highest quality within the strictures of the tightly disciplined score. Brass and woodwind – seasoned by Berg’s Chamber Concerto at Milton Court three days before – were particularly impressive,and Caroline Dearnley was justly given recognition by Knussen at the end of the piece for her passionately lyrical cello solos.