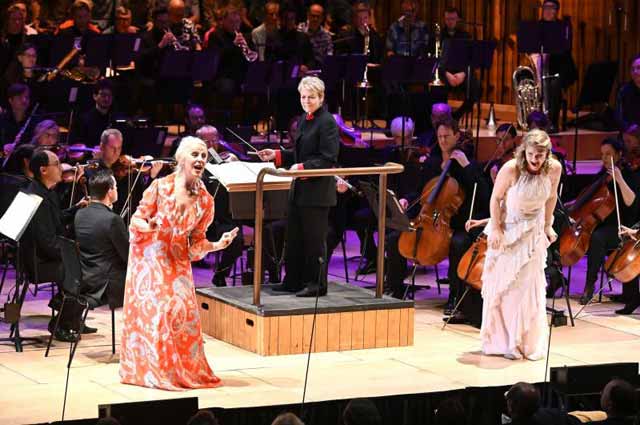 It hardly seems a year since the London Symphony Orchestra, then under the baton of Sir Simon Rattle, was commencing its celebrations of the centenary of the birth of Leonard Bernstein with a presentation of Wonderful Town. There have been a plethora of performances of the composer’s works all over the world since then, but the LSO returned to conclude its own exploration of them with performances of his celebrated operetta, Candide.

Bernstein himself conducted a highly memorable LSO performance in the same Barbican Hall in 1989, just a year before he died. This one was led by Marin Alsop, who had a long association with him, and has always spoken of just how much he inspired her. In the Overture it was striking to see the extent to which this was clearly so, even if on the surface her conducting appeared to look very different. There were none of Bernstein’s ‘eccentricities’, such as completely ‘flopping’ his body at the first tumbling section to signal how he wanted the line to feel, but if their techniques appeared dissimilar they were both put in pursuit of achieving the same bright and brilliant sound. Here, the clarity achieved helped the music to shimmer so that we really felt as if we were hearing birds’ shrill chirping, and the result was the strongest of starts to the afternoon.

The performance was semi-staged, with the soloists donning costumes, and in many ways this did produce ‘the best of all possible worlds’. On the one hand, it allowed the music to reign supreme, especially when rendered by such full and accomplished forces as those of the LSO, which no lengthy stage run could ever enjoy. On the other, because the set-up required simplicity in the ‘staging’ it demanded effects that actually complemented the Surrealism of the piece. For example, after Candide killed Don Isaac and the Archbishop the figures lay dead on the stage until being instructed to be out of the way, at which point they simply rose and scuttled off. This not only got a laugh, but tied in with a story in which so many other characters are resurrected, and a performance in which these two singers would go on to assume further roles. Other jokes included Candide grabbing Alsop’s baton in order to stab Don Isaac, which she then wiped on her leg in disgust before using once more, and Alsop leaning over the podium during ‘We Are Women’ as if to converse with Cunegonde and The Old Lady. This worked well with the song, and also perhaps alluded to the way in which Bernstein would sometimes apparently ‘stop’ conducting (although in reality, he never did).

Real use was made of the excellent London Symphony Chorus (Simon Halsey had rehearsed everyone well), who wore standard concert dress for the first half but louder shirts for the second. During the storm the men all swayed but then froze at different times so that their final positions represented a ship that had cleaved in two, while in ‘What’s the Use?’ different numbers of rows of the chorus swayed for each refrain.

Candide has possibly undergone more revisions than any other operetta in history. Most staged versions today use John Caird’s 1999 National Theatre one, but since concert versions are common as well these have created even more permutations. This particular one was devised by Alsop and the performance’s director Garnett Bruce, although it was clearly building on others that already existed. It increased the element of narration, so that this replaced some dialogue, made self-conscious jokes about the piece’s multitudinous librettists and cutting lengthy explanations, and introduced ‘retrospective’ jokes for comic effect. For example, we were repeatedly told that we had to put ourselves in an age in which nationalism, hypocrisy, self-righteous politics and wars over religion and ancestry were rife, which was surely so different from our own!

However, while any such presentation has to decide what to include and do away with, and almost any decision can be justified because at least one prior version has done the same, the choices made here were still questionable. For example, The Old Lady’s explanation as to why she lost her buttock was cut short, but only after still going on for a while. We finally received the ‘punchline’ that explained everything towards the very end of the performance, but overall things were not shortened enough to justify this decision on how to manage the point. The characters of James and Martin were cut altogether. The first is of little significance, although his drowning adds even more fuel to the ridiculousness of Pangloss’ arguments because he suggests that the Bay of Lisbon was created so that James could drown in it. However, the exclusion of the latter in combination with several other factors affected the pacing of Act II, making it pass too quickly as if it was simply intent on covering the basic plot points to get us to the end. This had the effect of suggesting that, in spite of everything we had still seen happen to Candide, things ultimately worked out too easily for him so that we did not gain a full sense of the difficulties he had to endure to enable him to reach his conclusion.

Nevertheless, there were some lovely touches, including a picture of Bernstein appearing on two screens during the Overture, and one of Alsop and Bernstein together during the curtain call. During the performance itself a map was projected revealing exactly where in the world Candide was at that moment, which proved to be incredibly useful, while every time a character uttered the immortal word ‘optimism’ this flashed up on the screens, using the same typography as the LSO itself does.

The stellar cast was led by Leonardo Capalbo, who as Candide revealed a beautifully expansive voice that also felt extremely solid and controlled, and Jane Archibald, who achieved just the right sense of ‘flutter’ in her coloratura in Cunegonde’s ‘Glitter and Be Gay’. They also brought a depth of emotion to ‘Oh, Happy We’ that only comes when such duets are sung by genuine operatic voices. Sir Thomas Allen is a very experienced Dr Pangloss (and Narrator), being the person of choice for this part as much as he seems to be for the Music Master in Ariadne auf Naxos. On this occasion, his clear sense of ease with the role made his portrayal feel as eccentric as ever, but also a little less sharp than it has been. He stumbled over a few lines during the narration, but his sheer class and presence did ultimately shine through. From among the rest of the cast, Anne Sofie von Otter stood out as The Old Lady, while Marcus Farnsworth and Thomas Atkins excelled in multiple roles. The latter, in particular, gave extremely striking and accomplished performances of the Governor’s ‘My Love’ and Vanderdendur’s ‘Bon Voyage’.

Many other parts were played well by Guildhall School Young Artists Carmen Artaza, Liam Bonthrone, Jonathan Eyers, Frederick Jones, Lucy McAuley and Katherine McIndoe, and when superb musicianship and spirited performances came together as they so often did here, it was hard to picture numbers such as ‘What’s the Use?’ and ‘Make Our Garden Grow’ being bettered. Thus, while some reservations can be expressed over the pacing, this performance was ultimately as classy as it was fun, and that is a pretty formidable combination.

Candide was recorded for release on the LSO Live label.