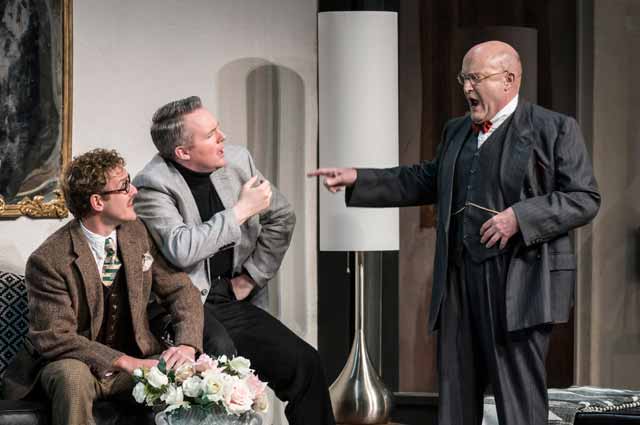 Salieri’s ‘Prima la musica e poi la parole’­ – first the music, then the words – partnered Mozart’s Der Schauspieldirektor at its premiere in 1786, and Strauss’ 1942 Capriccio carries on the argument as to the predominance of music or poetry. All three works feature comic presentations of the egos of actors and directors, all vying for supremacy, contrasted, in Strauss’ case, with the sublime nobility of the voice and person of the Countess. Garsington has brought together grandeur and triviality in this classic staging, in collaboration with Santa Fe Opera and featuring a Countess who is surely destined to be the Strauss soprano of our time.

Someone once said that Capriccio is not really an opera because no one dies, and it is true that the libretto could appear undramatic, but it is the music which finds its way into our souls – and just as there are many who say that Mozart’s Die Entführung is their ‘secret favourite’ of the composer’s works, so there are those who favour Capriccio over Stauss’ more grandiosely dramatic operas. Why? The answer has to be the sublime music, the eternal theme, and the lovable, if sometimes daft, characters.

The Countess is one of the great soprano roles, one always associated with Elizabeth Schwarzkopf, and Miah Persson brings to it a similar composure, elegance and occasional coquettishness, allied to a sure technique and gloriously flowing legato line. Her final scene was sung with the soaring grace and sweet, silvery tone which was Stauss’ ideal, and her shaping of the pivotal ‘Kein andres, das mir so im Herzen loht…’ was beautifully done, with nuanced phrasing and heartfelt expressiveness. She looked fabulous, too, in that Dior – inspired red dress and in the flowing midnight blue and silver evening gown. 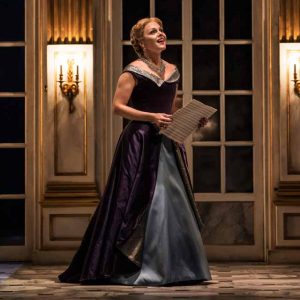 She was supported by a fine cast, with Andrew Shore’s La Roche both funny and touching, singing with his customary precision and presenting a fully rounded character – his monologue about the role of the director and the state of the Arts was delivered with great passion, the lines about respecting the past and patiently awaiting the future especially resonant. Sam Furness and Gavan Ring were a well contrasted pair of lovers, with the former’s Flamand looking a bit dishevelled and the latter’s Olivier the more suave. Both sang beautifully, although Sam’s tone is perhaps at times a little fragile for the lines – no matter, one cannot criticise a very young singer for not being Nicolai Gedda, and his ‘Kein Andres’ was sincerely poetic.

William Dazeley added yet another role to his repertoire of characterful assumptions, as always totally convincing in both voice and manner. Hanna Hipp played Clairon as the ultimate ‘actressy’ stage personage, her voice as smoky as that of any Hollywood diva. Graham Clark was a touchingly acted Monsieur Taupe, and Benjamin Bevan a subtle Major-Domo. The Servants’ brief scene featured some genuinely amusing cameos, and Lowri Shone’s dancer showed clearly why La Roche was so smitten with her. The Italian singers, in the persons of Nika Gorič and Caspar Singh, gave perfect examples of their director’s favourite art.

The onstage sextet was exquisitely played by young musicians from the Royal Academy, and the Garsington Opera Orchestra gave a scintillating account of the score under Douglas Boyd’s sympathetic, affectionate direction. Boyd clearly loves this music with a passion, and it shows in every bar. Outstanding.

Tim Albery’s production, with Tobias Hoheisel’s elegant designs, is set in the twentieth century, which might make the discussions about Gluck seem odd, but in fact it all works to great effect. It helps that the set is composed of a very ‘modern’ house with a Rococo music / drawing room at its core, thus suggesting the parallel debate to music and words – that of the old and the new. As always with this director, great care had been given to establishing and maintaining the relationships of the characters, and certainly in terms of the sympathetic way in which the singers had been directed, it was Music which ‘won’ in the end.