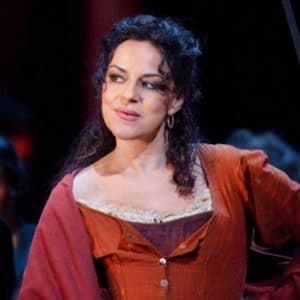 Carmen has always attracted the virgin operagoer with sex, but anyone lured to Francesa Zambello’s production, revived this month at the Royal Opera House, on the basis of its raunchy publicity poster might well be disappointed. It’s far more straight-laced than the hype suggests, a rather conservative affair in fact, and perhaps that’s no bad thing. Sally Potter showed us where grandiose claims about grittiness and originality can lead with her misguided production at ENO; why not tell it like it is with an unashamed crowd-pleaser?

Flirting with all the aesthetic hallmarks of musical theatre, Zambello cranks up the drama with rousing crowd scenes and clear emotional gestures. True to Bizet’s own conception he never visited Spain she makes little attempt to dodge cliché. Hers is a Carmen of heaving corsets and glittering toreadors, where all the women are raven-tressed and all the men loose-hipped. One might have described it as brash were it not for such careful attention to detail and the overall quality of showmanship. An unruly menagerie of animals, acrobats and street urchins, for example, swells to an almost Verdian scale but then shrinks, suddenly and dramatically, to illuminate the very quick of an intimate exchange.

Tanya McCallin‘s set comprises a multi-purpose piazza that swivels into a back-street bar, or bordello, in Act II, and suggests a warren of rock dwellings in Act III, where extras scale in and out on ropes amidst swirls of cigarette smoke. Admittedly, there’s the occasional hackneyed motif (should anyone forget we’re in Seville, a carefully placed orange tree provides the aide-mémoire) but when taken as a whole, each tableau is sumptuously imagined. Credit must go to Paule Constable for the spectacular lighting effects, which set the tone of each scene, whether it’s bright sun-soaked terracotta during the opening act, or a cluster of glinting campfires outside the smugglers’ lair.

Musically, there was much to enjoy alongside some unevenness. As Carmen, Nancy Fabiola Herrera certainly looks the part, and her rich vocal tone suits the sultry score, but at times she plunges so deep as to sound contrived, resulting in the strange illusion of swallowed words. She takes the Habanera at a stately pace, but otherwise her delivery is confident and appropriately feisty. Our Don Jos, Marcelo lvarez, may not sport an Adonis build but his Latino looks are perfect for the part, and his characterisation offers a winning mixture of charm and malevolence. According to a pre-show warning, he was suffering from flu-like symptoms but, excepting a slight tightness in the upper register, there was little sense of restraint in the powerful moments, and his final lament seemed genuinely uninhibited.

Susan Gritton makes her debut as Micala with a secure performance, though one senses she’s not entirely comfortable in the role, and Kyle Ketelsen, having excelled as Figaro and Leporello at Covent Garden in recent years, makes a vigorous and charismatic Escamillo. The chorus is very effective, visually, but perhaps they let their stage role distract them from the duties of delivery: a sharper eye could be kept on conductor Daniel Oren, who balances Zambello’s extravagance with a clean and bright account from the orchestra pit.