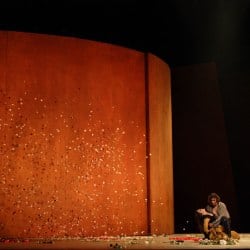 Over a month into an extended run, and Francesca Zambello’s new production of Bizet’s Carmen remains as vibrant and atmospheric as it was in early December. And while a change of cast hasn’t been entirely beneficial to some of the main characters, it says a lot for the production that the overall interpretation is still as emotionally engaging in slightly lesser hands.

I still love the live horse, chickens and donkey; the children and their hooplas; the eye-popping parade that opens the final act; and the evocative designs (Tanya McCallin) and lighting (Paule Constable): it’s refreshing to find an opera production that foregrounds the story (especially one as vivid as Carmen).

This was a triumph for the company, too. The Royal Opera’s excellent Young Artists programme contributed three of the most satisfying performances, for instance. Ana James excelled as Frasquita, her nice floating voice perfect for the quintet of the second act, while Liora Grodnikaite (Jette Parker Principal) had the ideal musky tone for Mercédès. Most especially though, Jacques Imbrailo got the opera off to a confidant start with his dominating portrayal of Moralés. Here is surely a star in the making: take note that he’s playing the title role in Britten’s Owen Wingrave in the Linbury Studio in April, and book now.

Admittedly, the casting of the four principal roles didn’t seem altogether ideal in the first half of the performance. We had a Don José who was too old and stocky to be believable as the lover of Carmen, a bullfighter who looked very worried to be riding on a horse and a Micaëla who was so young that she seemed more like José’s daughter than his prospective fiancée on their initial meeting. However, all four of these individual performances grew in stature, and there was definite fire in the second half.

Viktoria Vizin was excellent as Mercédès in this production in December, and although she’s a bit tentative in the upper register and didn’t quite let rip until the second half, I found her a persuasive Carmen (a role that one assumes she took over at relatively short notice). A young Hungarian singer, she was in some respects more satisfying than Anna Caterina Antonacci in December because she is a true mezzo, with the lower extension that the role really demands but doesn’t always enjoy when a soprano takes the role. It wasn’t the most memorable Habanera in history, but by the end I was rather taken with her.

Tenor Marco Berti is surely better suited to the heroes of Italian opera than he is to Don José. It’s a bit unfortunate that the production was modelled around so young and handsome a singer as Jonas Kaufmann, for Berti’s sturdier figure and bland acting ability didn’t really work in this setting. For me, it wasn’t really believable that Carmen would ever go after him, and vocally, too, he was sometimes underpowered in the first half. Yet when the tides have turned after the interval, Berti took on a greater presence, and his voice provided as many thrills as one could hope for in the part.

By far the most disappointing performance came from the vocally and physically underwhelming Laurent Naouri, whereas Liping Zhang was exceptional as Micaë`la: sweet-toned and a self-possessed actress, her aria was the evening highlight.

High commendation goes to Philippe Auguin‘s full-blooded conducting; he thrust his way through the action and helped the orchestra (in their best form) to find the lyrical colours in the score, too.

While there were moments in which the evening felt more efficient than outstanding, it triumphed in the end. It was never less than entertaining and entertainment is highly underrated these days.