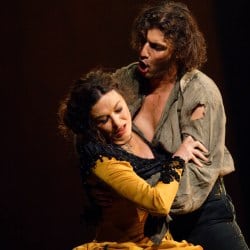 I can’t imagine a better tonic against the onset of winter than Francesca Zambello’s new production of Bizet’s Carmen for the Royal Opera. It helps that the cast is young, sexy and highly emotional: rarely has the drama seemed so vivid or so human as in Zambello’s hot and sultry staging. It’s the ideal showcase for her directorial talents. The mixture of epic crowd scenes and passionately intimate ones is perfectly balanced, from the children playing with hoops and the adorable donkey in the opening tableau to the deserted exterior of the bullring during the final duet.

The title role of Carmen can be an embarrassment if the singer playing her isn’t attractive enough, but Anna Caterina Antonacci‘s portrayal is fulfilling in every way. She is a complete woman: although she remains true to her freedom as a gypsy, Antonacci’s Carmen attains more dignity and even an aristocratic edge by the final scene, partly thanks to Tanya McCallin‘s sensational costume for her death scene. And which red-blooded male in the audience could have failed to respond to her seduction of Don José? Vocally, too, this was a rewarding experience, even if the singing wasn’t quite as exciting as the acting. Unusually for a soprano, Antonacci’s tone has body in the lower register, whilst her attack on the high notes was inevitably energetic.

By far the stand-out performance came from Jonas Kaufmann, making his role debut as Don José. It’s almost impossible to describe the virtues of his interpretation, for they were so plentiful. His characterisation of the role was easily the most convincing I have seen. Again thanks to the costume designs and direction, we see José change from smartly-dressed, reserved soldier in the opening scene to ragged, jealous lover in the final scene. Cleverly, Zambello has Carmen climb the social classes as Jos descends them. Kaufmann’s singing, however, is what really deserves a reward. In the most electrifying vocal performance of the season, the tenor showed both lyrical phrasing and ringing high notes. What surprised, delighted and moved me, though, was his shading down of the voice into an almost falsetto region for the penultimate line of the Flower Song (ardently delivered) and the final few lines of the closing scene. Ignore the winter weather: queue now for day seats just to hear Kaufmann’s singing.

Although he looked and acted the part going so far as to arrive onstage mounted on a horse – Ildebrando D’Arcangelo wasn’t wholly convincing as Escamillo. The Toreador Song was evidently a challenge, and I missed some firmness of tone in the climactic Act III duet between Escamillo and José. Yet his arrogant air really worked within the production, and elsewhere his singing matched the others’.

Norah Amsellem, too, wasn’t quite at her absolute best as Micaëla, in my opinion, though she was rapturously received by the audience at the end. She sang beautifully and was always impassioned, but she didn’t project as well as during her excellent Traviata last year. Nor did her hyperactively fluttering eyelashes strengthen her characterisation in the first scene. Yet Zambello has a stroke of genius for her Act III aria: Micaëla borrows a soldier’s uniform from the abandoned camp, and puts it around her shoulders, matching her ‘masculine’ resolve to return José to his mother (one of the production’s many intelligent details).

Of the smaller roles, former Young Artist Matthew Rose topped even his impressive performance in the LSO’s L’enfance du Christ last weekend: he almost stole the scenes in which he appeared as Zuniga with his imposing presence and powerful projection. A Young Artist newcomer, Jacques Imbrailo, was also notable as Moralès; the more time goes on, the more the fruits of the Young Artist programme become apparent.

The Royal Opera Chorus was a bit mixed: the opening and closing scenes were underwhelming and sometimes poorly pitched, but the middle two acts found them in lustier voice. More consistently impressive was the choral singing of the boys of The Tiffin School and the girls of The Tiffin Girls’ School.

Antonio Pappano once again proved his prowess in the French repertoire with a finely-honed account of the score. At times, it was almost too refined: my brain marvelled at the exquisite dexterity of the strings’ phrasing of the Prelude, for instance, but it lacked an ounce of punch. Such elegance is rarely to be found in the opera house these days, however, and it’s not to be taken for granted.

In all, a solid, exciting and visceral experience. Not to be missed.