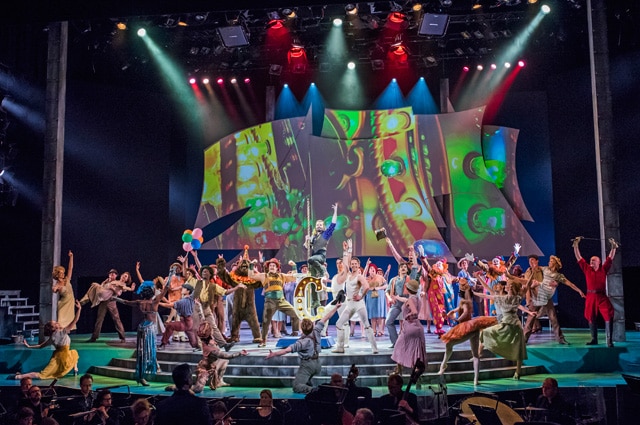 Lonny Price’s production of Rodgers and Hammerstein’s classic Carousel, presented by Michael Linnit, Michael Grade and English National Opera, is very nearly a victim of its own success. This is because it promotes itself as semi-staged, but offers so much more than is usually associated with the term, that it feels more natural to judge it by the measure of a full production. It does, however, prevail, partly because as we watch we know it is offering far more than was promised, and partly because in some areas what it achieves is commendable by any measure.

A giant turntable dominates the stage, and creates an effective infrastructure for the drama as crates and platforms placed upon it frequently revolve. James Noone’s designs also include a backdrop of multiple overlapping screens that together depict a sailing ship. With a stream of pictures, presumably by American artists, appearing on them, they create a general impression of 1870s New England while all of the performers don full costume, courtesy of Tracy Christensen.

There are an exceptional number of thoughtful touches from the start as the curtain rises on a tableau that reveals the musical’s closing image. From here Brother Joshua (Jay Bryce) ‘spins’ the scenario into reverse so that over ‘The Carousel Waltz’ all of the performers move backwards in slow motion, and then take us back through the story to the opening fairground scene. Here, the carousel cleverly sees the horses substituted for the letters ‘C’, ‘A’,‘R’ and so on, so that the show’s title is spelt out as the ride rotates.

The waltz also reveals Billy as a child being hit by his drunken father. This suggests that for him the life of a barker was a means of escape from the brutality he was used to, which is clever for a number of reasons. Carousel has, perhaps inaccurately but not entirely unfairly, been accused of condoning domestic violence, and Price has clearly taken steps to engage seriously with the charge. The production does not attempt to justify Billy’s actions, but it does show how his own background may have led him to end up the way that he is. Then, when Carrie proclaims that Billy hit Julie and asks her why she doesn’t leave him, she does so with a gravitas that is not seen in many other productions, thus ensuring that the issue is not trivialised. 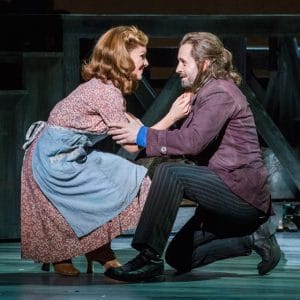 The attention to detail also manifests itself in small ways as well as big. For example, as Billy is about to descend to earth again and steals the star to take with him, Brother Joshua moves to stop him, but the Starkeeper who also witnesses the act lets him take it. At the end, the sight of Billy standing alone and then departing as his wife and daughter embrace makes him feel like Hans Sachs. He has manipulated events so that ‘everyone’ has ended up happy except for him, with his only consolation being the knowledge that he has done the right thing.

One could never expect a semi-staging to boast the same level of dance credentials as Christopher Wheeldon’s An American in Paris, but what choreographer Josh Rhodes achieves is impressive. For example, he sets up ‘Blow High, Blow Low’ and the ‘Hornpipe’ so that the dancing is excellent in its own right, while still not being dependent on fifty dancers doing exactly the same thing (as in 42nd Street) because it is supposed to feel rough and ready. The Act II ‘Ballet’ is also strong as during the routine it presents three Louises at different ages, thus emphasising that it is really showing the story of her life. The dance troupe beautifully creates the horses of the carousel, while the pas de deux between Louise (Amy Everett) and the circus dancer is brilliant, achieving the right balance between portraying innocence and sexuality.

There are some weaker moments, such as when Mr Snow performs ‘Geraniums in the Winder’ with too many overtly comical gestures. The song’s words are so funny that the humour should derive from seeing them delivered with the utmost seriousness, especially since the number ought to act as a counterpoint to the larger ‘Stonecutters Cut it on Stone’ that immediately follows. Similarly, so few cuts are made to the show that the ones there are seem unnecessary, especially since they undermine the overall experience so much. There is no card game prior to Billy’s death, which normally helps to build up the tension and sense of impending doom as we increasingly witness his desperation and delusions. The result is that his death arrives too quickly, is not as emotive as it should be, and creates something of a dip in the middle of Act II. It is similarly a shame that ‘The Highest Judge of All’ is dropped straight after this because it is such a rich and intense song.

The cast is generally strong, with Alex Young as Carrie, Brenda Edwards as Nettie, Susan Kyd as Mrs Mullin and Derek Hagen as Jigger all providing good support. Alfie Boe is an excellent Billy, and with his strong tenor delivers a stirring performance of the ‘Soliloquy’. Sometimes he does not quite portray Billy’s psychological depths as he resorts to obvious and unsubtle gestures to project his character, but, watching his face, there is no doubt that he feels them. Katherine Jenkins as Julie is a good actor and produces a very sweet sound. Occasionally her vibrato feels a little too much because it is amplified (the singers are miked), but overall her performance of ‘What’s the use of Wond’rin’’ is moving. Gavin Spokes, recently seen as Nicely-Nicely Johnson in Guys and Dolls, is a brilliant Mr Snow, simultaneously making him oafish, ambitious and pompous, while Nicholas Lyndhurst provides a highly sensitive portrayal of the Starkeeper.

One of the delights of a piece like this being presented by English National Opera is the resulting strength of the musical credentials. The ENO chorus is on top form, while the orchestra, standing in a raised pit, is far larger than the purse strings would ever permit for a lengthy West End run of the show. Under the baton of David Charles Abell, who also conducted Fiddler on the Roof at Grange Park Opera in 2015, it enables certain lines to be appreciated in a way that it is difficult for them to be in many other performances of the work.

Molly Lynch sings Julie on 18 April and Murray Hipkin conducts the matinee performances on 26 April and 3 May.