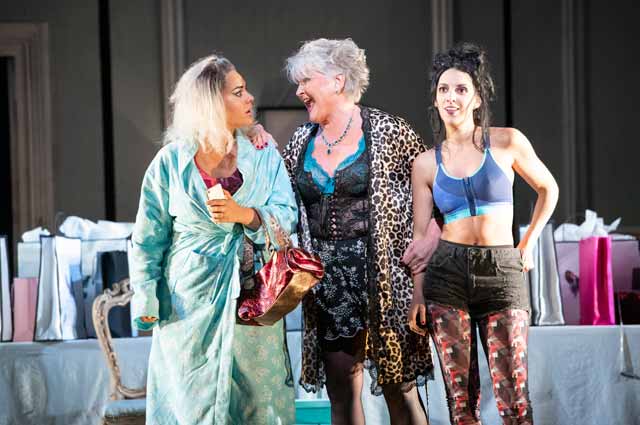 This new production of Cendrillon and the revival of the 2014 La traviata mark fifty years of the Glyndebourne Tour; established in 1968 with the twin aims of championing new singers and bringing opera to wider audiences, it has succeeded admirably. You can get a good seat for £22 at Glyndebourne itself, less at one of the touring venues, and experience not only innovative productions but also some of the most promising of today’s young singers. Those who have made notable role debuts with the Tour include Gerald Finley, Roberto Alagna (singing his first Alfredo in the 1988 Traviata) and Felicity Lott, making her first Glyndebourne appearance as the Countess in Capriccio. Perhaps one of this year’s Tour productions will feature yet another future star?

Fiona Shaw directed a searing Rape of Lucretia for the Tour in 2013, so expectations were high for this Cendrillon – no greater contrast between two works can be imagined, but each showed a similar level of dramatic engagement and inventiveness. The atmosphere of the production is faithful to Perrault’s dark vision, and the musical direction, under the rising star Duncan Ward, is well nigh faultless, making Massenet’s romantic episodes swell with ardour and his capricious ones sparkle. The singing is similarly glittering, with Glyndebourne debutants Alix le Saux as Cinderella and Eléonore Pancrazi as Prince Charming both light-voiced for their roles, but otherwise absolutely right as the forlorn, dreamy girl and her besotted suitor.

Shaw’s concept of gender as fluid and love as evanescent is well illustrated, the special nature of the young lover’s connection with Cinderella subtly shown early on, and the Prince’s rejection of his father’s pleas to marry both amusing and touching. The ever-present suggestion that part of life is an illusion was finely shown in the presence of the little blonde girl clad in Alice blue, representing Cinderella’s childhood as well as her hopes and dreams. The earth-bound counterpart to this was in the ever-reliable hands of William Dazeley, singing with authority and presenting as credible a figure as the libretto allows.

Madame de la Haltière is sung and acted with tremendous verve by the experienced Polish mezzo Agnes Zwierko, another Glyndebourne debutant, and her two daughters are given believably chavvy characterizations by the excellent Eduarda Melo and Kezia Bienek. Caroline Wettergreen’s Fairy is mostly undaunted by the coloratura demands of her role; this young Norwegian soprano is another welcome first timer in this house. 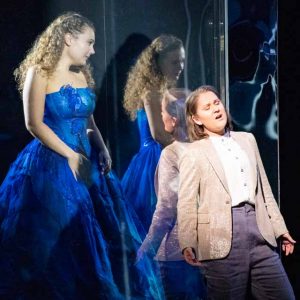 The Glyndebourne Chorus sang superbly, and there were treasurable cameos from Michael Wallace as the PM, Adam Marsden as the King, Anthony Osborne as the Dean and Romanas Kudriašovas as the MC – and of course the ever-sprightly Spirits.

The presentation of the stepmother and daughters as what mothers of the previous generation might have called ‘common,’ the frequent employment of mobile phones and selfies, and above all the use of smoking to represent either loucheness or insouciance, are all a touch ‘old hat’ these days, although they do add to the laughter, which was frequent and appreciative.

Otherwise, the production is a delight. Jon Bausor’s sets show both creative use of space and poetic sense of colour and shape; the swiftly moving panels and mirrors keep the eye following every vignette, and there is a wonderful sense of the hazy quality of the boundaries between appearance and reality. Nicky Gillibrand’s costumes are a riot of colour and fun, and Cinderella’s dress is one which any girl would want to wear. Anna Watson’s lighting bathes everything in a lambent glow, and Sarah Fahle’s choreography is both ‘modern’ and rooted in classical style.

Fiona Shaw gives her characters interesting but not intrusive things to do, and she understands how to use singers on stage – which may not sound a great deal, but it is hard to achieve. This production has a few more performances at Glyndebourne itself, before touring to Canterbury, Norwich, Woking and Milton Keynes, and you can still obtain tickets for some of the showings of this beautiful, engaging Cinderella – highly recommended.