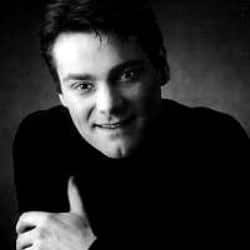 Their tribute to the famous Lieder composer, Robert Schumann included some of his most brilliant and moving works.

The performance started with the Dichterliebe, Op. 48.

These were sung superbly by Gerhaher whose expressive, yet easy sound was able to flow seamlessly through the songs’ diverse emotions.

Huber accompanied sensitively on the piano, providing a firm but gentle support whilst bringing out the embedded meanings which saturate the music.

The first half of Dichterliebe focuses on a joyous love. The poetry is typically idyllic and speaks about a temperate, beautiful nature full off flowers and song birds. However, there is a realism which can be seen through the hint of melancholy that is quashed by the lover’s desired one.

Particulaly evocative in this recital was the vivid and erotic music. For example, the words from Ich will meine Seele tauchen (I want to dip my soul) – ‘Das Lied soll schauern und beben /Wie der Kuss von ihrem Mund’ (‘The song shall thrill and quiver like the kiss of her lips’. The second half of those songs was almost completely despairing. The tragic words ironically mock the idealistic romance of the first songs. The two musicians’ performances immediately inverted the mood they had created in the beginning of this famous song cycle. The transformation provided a perfect and cutting display of raw emotion.

The heartbreaking tone which ended the Dichterliebe, made way for the equally morose Lieder from Op. 40, by Hans Christian Anderson. The poet is well known for his chilling visions, and the famous Schubert settings were conveyed, without exception, in a horrifically unsettling manner.

Gerhaher managed to go through a schizophrenic array of moods and personas. Sometimes he was representing the caring, hard-done-by mother. Then he suddenly switched to the alarmingly violent and almost reedy voice of the raven who declares, ‘Dein Engel wird unser sein’: ‘your angel shall be our prey’!

Each song in this selection describes a very different form of heart-breaking disaster, but all centre around loss. First, the loss of a child, the loss of a best friend (Der Soldat, The Soldier), and the loss of a lover (Der Spielmann, The Fiddler).

The programme ended with the three songs sung by the blind harp player in Goethe’s Wilhelm Meister the Harfner songs, Op. 98a. These three songs also centre on characters who face adversity. They focus on the depression of humanity and, once again, provided a medium for both Gerhaher and Huber to create a strong atmosphere. Both performers hypnotised the audience with their rendition.

It is a shame that so much of this concert focused on music which, as it was performed so well, would surely have left bosses wondering why their employees had come back from their lunch breaks so downhearted. On the other hand, maybe it got all the romantic mood swings out of their systems so that they were more productive. Howsoever the romantic wallowing affected the audience after this concert, it was certainly done wholeheartedly and with flawless technique. This dynamic duo work well together and they are certainly a pair to drop everything to go and see.