Melanie Eskenazi attends a live performance without leaving her sofa 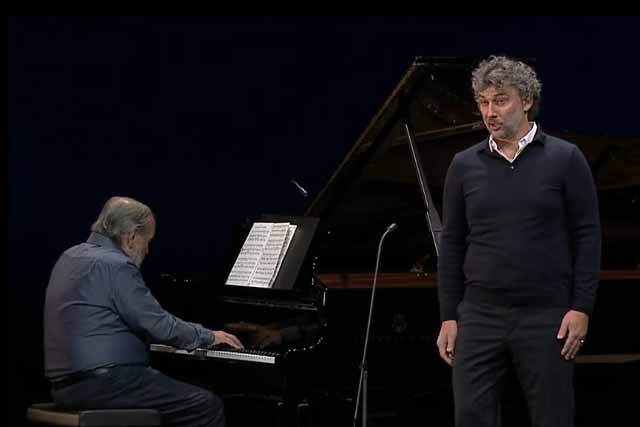 One of the few advantages of the present situation is that we can access performances of great works which are streamed to us for free; it may not be much of a substitute for the Wigmore Hall, but it comes pretty close and allows those in far-flung locations to share in the plenty which the fortunate few are able to access all the time.

Monday night’s live concert from Munich was a Memorial to Sir Peter Jonas, who was intendant of the Bavarian State Opera from 1993-2006: he was the first British national ever to run a major German house, and preceded those years with his remarkable tenure at the English National Opera from 1985-93. Those of us old enough to remember the ‘Powerhouse Years’ when he was part of a triumvirate with David Pountney and Mark Elder, will never forget the true sense of a company which he fostered, and the originality and often brilliance of the productions of those years.

It’s quite a challenge to perform to a completely empty auditorium when you are used to it being filled with admiring opera lovers, and the artists in this evening’s recital coped with it in different ways. The French soprano Elsa Benoit, a member of the ensemble at the Bavarian State Opera since 2016, chose to sing as though in her own world, facing slightly towards Donald Wages at the piano, and thus gave an exceptionally intimate rendition of ‘Piangerò la sorte mia’ from Handel’s Giulio Cesare. Clad entirely in black, Elsa gave a most credible characterization of the sad queen who thinks that she has lost everything.

Mozart’s Piano Quartet in E flat major, K493 followed, in a beautifully warm performance by the Münchener Klavier Trio with the viola of Tilo Widenmeyer. The ensemble finely captured the refined harmony of the piece, the piano never too dominant but an equal partner, and the filming enabled us to see the players both as individuals and part of the whole.

The evening’s main work was Schumann’s Dichterliebe, with Jonas Kaufmann and Helmut Deutsch. Of all the evening’s performers, Kaufmann seemed the most perturbed by the empty auditorium – Helmut of course could play through a volcanic eruption and barely turn a hair, but Jonas appeared somewhat on edge, perhaps unnerved not only by the lack of an audience but by the absence of a barber to have given his wayward locks a trim. Nevertheless, he gave a superb performance of this much-loved work.

A great deal of water has flown under the bridge since I wrote of him in 2003 that he was “…at his best in forte, and at his least effective when tenderness and nuance are required.” That could never be said of him in 2020; although he rises to the grand moments with power to spare, he is now the master of both nuance and tenderness. He was superbly partnered as always by Helmut Deutsch, whose playing was masterly in its phrasing and sense of drama, the poignant nachspiel played with such elegance and warmth that it lingered long after the concert had finished.

Kaufmann presents a much darker, more melancholy poet nowadays, the ferocious songs such as ‘Ich grolle nicht’ so despairing that the words seem to be wrenched from deep inside. Words such as ‘zerissen’ carry much weight, as do simple phrases such as ‘du wärst mir noch gut’ and the cycle as a whole is communicated with the aching, tremulous passion of the true Schumann interpreter. The penultimate song, ‘Aus alten Märchen’ was an object lesson in how to vary the facets of the feelings being presented, with the lines ‘Ach, könnt ich dorthin kommen / Und dort mein Herz er’freun’ (Could I but reach that land, and make my heart glad) phrased with heartfelt emotion. By the end of the cycle, we felt as though we really had been on a journey, from the languid desire of the opening lines to the grim resignation of the final stanza.

This concert is available to May 6 at staatsoper.de/tv