Leeds Lieder Festival is live again, staged in the beautiful Victoria Hall, which is a star in itself. 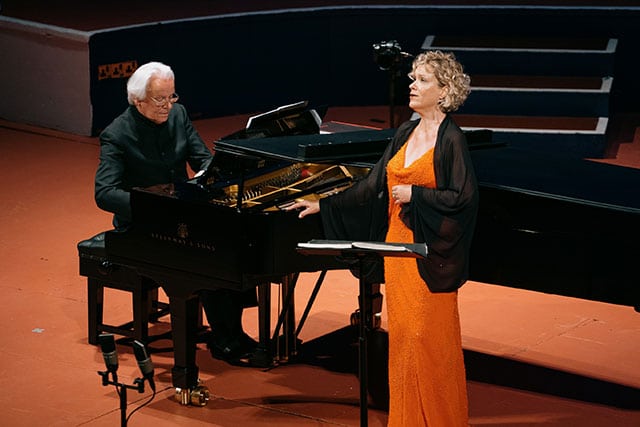 “Filling the city with song” is the motto of the remarkable Leeds Lieder Festival, founded in 2004 and growing in significance with each passing year. The great soprano Elly Ameling is the Festival’s patron, and she has clearly inspired a new generation of singers. The Festival’s four days are packed with recitals from established artists as well as newcomers, with Master Classes by distinguished singers and each day culminating in a very starrily cast recital.

This opening concert by Alice Coote and Christian Blackshaw set the bar extremely high; for many in the audience it was the first ‘live’ recital for over a year, and this lent a special excitement to the event despite the distancing and masking involved. The programme – 90 minutes without an interval, but it flew by – was an eclectic mix of romantic song, based around themes of light and darkness, longing and fulfilment, all appropriate to the present mood of sadness mixed with hope. 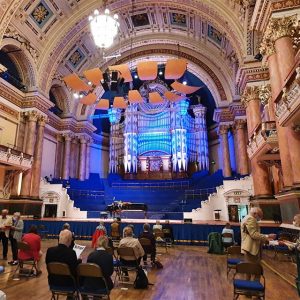 Alice Coote, along with Sarah Connolly, has taken on the mantle of Janet Baker, and how gracefully she wears it. Her affinity with Schumann, Strauss and Tchaikovsky was here shown to be as remarkable as that she reveals in Handel, and no better demonstration of this could be found than in the second and third songs of the recital, Schumann’s ‘Die Lotosblume’ and Strauss’ ‘Zueignung.’ The heady, full-blown romance of these songs was powerfully delineated in both Coote’s singing and Blackshaw’s fervent playing, even though the spacious but harsh acoustic of the Victoria Hall does the piano no favours. The final line of ‘Die Lotosblume’ – ‘…und zittert / Vor Liebe und Liebesweh.’ (and trembles with love and its pain) was delivered with tenderness, and that of ‘Zueignung’ with full-throated passion.

Tchaikovsky’s ‘Den li tsarit’ (In the glory of day) allowed Blackshaw to demonstrate his remarkable facility with tempestuous phrases, and his ability to scale down the instrument was amply shown in Mahler’s Rückert Lieder. Coote’s performance of these songs was outstanding: from the delicacy of ‘Ich atmet’ einen linden Duft!’ to the ecstatic calm of the final song, this was very individual yet faithful interpretation. Few singers can do fervent affirmation as convincingly as Alice Coote, and her ‘Du hältst die Wacht / Um Mitternacht!’ rang out thrillingly into the hall’s vast space.

Strauss’ ‘Allerseelen’ swept away all the nostalgia from this wonderful song, emphasizing the pain of true loss in the wrenching sadness of the final ‘Wie einst im Mai.’ The singing and interpretation recalled that of the Fischer-Dieskau recording, and that is the highest praise. Strauss had the final word of the recital proper, with an ardent, tender performance of the sublime ‘Morgen.’ Schumann’s ‘Nachtlied’ was the single encore, both sad and uplifting in its melancholy.

The Festival continues with Britten’s Five Canticles on Friday 18 June at 20.00, led by Mark Padmore and Iestyn Davies, and forthcoming highlights include a Sunday lunchtime recital by James Gilchrist.