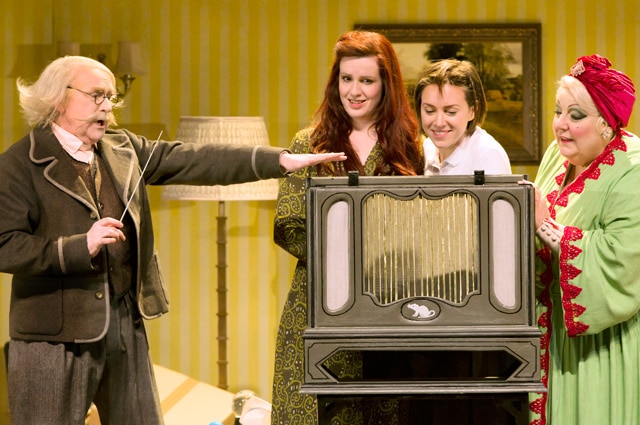 Coraline began life in 2002 as a novella by Neil Gaiman. Henry Selick directed an animated film version in 2009, and now it has received the operatic treatment from Mark-Anthony Turnage and librettist Rory Mullarkey.

The story tells of a girl, Coraline Jones, who has trouble settling in when her parents move house. She has no friends in her new place, her Mother and Father are too busy to give her any attention, all of the neighbours seem old or crazy, and the weather prevents her from even going outside. When she finds a tiny door in the living room wall, and obtains the key to it, she discovers that it leads to a ‘parallel universe’. In it, her house seems exactly the same, but all of the neighbours lead fulfilled lives and her Other Parents, as they describe themselves, have time for her and give her everything she desires.

If it all seems too good to be true, things take a sinister turn when the Other Mother asks her to make a large sacrifice in order to be supposedly happy forever. Coraline refuses, as she has learnt that without rain there is no sunshine, and that she genuinely loves her real parents in spite of their imperfections. However, when the Other Mother plays foul in an effort to retain her, Coraline is forced to fight – and play – hard in order to free herself, and, as it turns out, several others.

Unlike Thomas Adès’ version of Luis Buñuel’s The Exterminating Angel, this opera is best seen as an adaptation not of a film, but of the original novella. This is because, if anything, the story is taken in the opposite direction to the screen version. Writing is the perfect medium for leaving everything to the imagination, while animation has enormous scope for creating arresting images. A stage, on the other hand, limits the number of locations that can be used and hence requires an interpretation of the piece that can accommodate smaller parameters for the action. 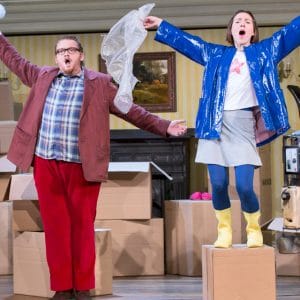 As a result, the number of times that Coraline moves between the two worlds is reduced, and there are occasions when this fantasy does feel a little too earthbound. Nevertheless, the staging is slick, as the living room in Giles Cadle’s set spins around to create an identical one, only with everything reversed so that a mirror on the right now appears on the left. The neighbours’ flats slide in from the left and right, and are even designed so that each comes in from the opposite side in the ‘inverted’ world.

However, in this operatic version, it is not simply a matter of simplifying affairs to fit a stage. Rather, Turnage’s effective score is designed to generate its own unique experience, which does sometimes necessitate changes to the story. In both the original and the film the neighbour Mr Bobo is trying to create a mouse circus, with his creatures failing to perform in this world but doing so magnificently in the other. While animation can generate the most spectacular routine to reveal this, live theatre cannot so they are turned into a mouse orchestra where the music takes the strain, and the tune they play generates exactly the right atmosphere. However, if the strength of the score in this scene enables the opera to get away with us hardly seeing the actual mice, its counterpart is less successful. Coraline’s other neighbours are retired actresses, Miss Spink and Miss Forcible, who in the parallel world perform a never-ending act in their flat. It is hard, however, to feel much for the scene where this is revealed, not least because there are not the hoards of Scotties that they own acting as an adoring audience.

In other ways, one can admire the inventiveness that has come into play. The original story involves a well, but here a new theme is introduced to enable the plot point associated with it to be realised inside the house. One special effect towards the end also proves to be as convincing as it is scary (the opera carries an age recommendation of eight and over), showing how well the magic consultants Richard Wiseman and David Britland have done their job. There are also some operatic references so that when Coraline is told she can have anything she likes, she says a magic flute alongside all of the toys that any child might list. Similarly, the Other Mother’s love for a child is compared to a dragon’s love for a hoard of gold.

This world premiere of Coraline constitutes a co-production between the Royal Opera, Opéra de Lille, Theater Freiburg and Victorian Opera, and is staged in the Barbican Theatre with Aletta Collins directing and Sian Edwards conducting the Britten Sinfonia. Robyn Allegra Parton is superb in the title role, which she shares over the run with Mary Bevan. It is a deceptively big sing as the character is on stage throughout the two hour opera (there is one interval). Parton, however, is consistently strong as she shapes her soprano to produce an excellent sound that also reveals Coraline to be a head-strong, but ultimately normal, child.

Kitty Whately proves an exceptional actor as the Mother and Other Mother, and if she does not feel stern or dismissive enough as the former to make it clear why the latter should appeal so much, this really represents a fault with how this version sets the character up. As the Other Mother she successfully transforms herself from a sweet, loving person into an increasingly evil and desperate figure, as her hair becomes wilder and her very personality seems to undergo a metamorphosis. Alexander Robin Baker displays a superb baritone as the Father and Other Father, Gillian Keith and Frances McCafferty are suitably diva-like as Miss Spink and Miss Forcible respectively, while Harry Nicoll is a joy to watch as the eccentric Mr Bobo dances around with his conductor’s baton. Dominic Sedgwick is also excellent as the Third Ghost Child, with the other two being played equally effectively by Keith and Nicoll.

The performance on 7 April will be recorded by BBC Radio 3, presumably for a future broadcast.