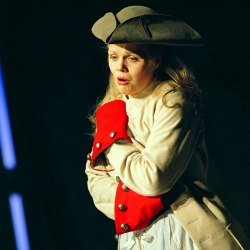 Cos fan tutte‘s original title La Scuola digli Amanti (A School for Lovers) coincides nicely with director Nicholas Hytner‘s Tony award-winning production The History Boys earlier this month, with both taking the theme of the education and influence of innocence by the wisdom, not to say the cynicism, of experience.

In his direction of this spellbinding production for the Glyndebourne Festival, Hytner, working with a young and attractive but largely unknown international cast, produces a supremely subtle interpretation, maintaining faith with the original text of Da Ponte.

Ivan Fischer conducts The Orchestra of the Age of Enlightenment with verve and authority. One of the additional pleasures of this location is that conductor and orchestra are both visible to the audience and the individual instruments, which Mozart uses throughout the score to comment on the text and drama, can be heard with clarity. For beyond the exquisite surface beauty of the operatic score Mozart communicates with insight and depth on the emotional psyches of his characters, which is where the greatness of his music lies ‘the compassionate anatomist of the human heart’.

Written in 1789 and first produced in Vienna in January the following year, Cos was Mozart’s third collaboration with his librettist Da Ponte, after The Marriage of Figaro and Don Giovanni. Unlike these, however, Cos was a completely original story, albeit with roots in classical literature, rather than an adaptation from an existing source.

The plot is superficially absurd. Ferrando (Topi Lehtipuu) and Gugliemo (Luca Pisaroni) are challenged by Don Alfonso (Nicolas Rivenq) to prove his belief that their fiances, the sisters Dorabella (Anke Vondung) and Fiordiligi (Miah Persson) respectively, will prove to be unfaithful to them and that, ultimately, all women are flighty, superficial and incapable of fidelity. They disguise themselves and duly press their attentions on each other’s partners. Eventually, each of the sisters falls for the wrong man.

Absurd though it may sound, the opportunity the opera provides for deception, intrigue and jealousy, not to say farce, with this good-looking, youthful and beautifully balanced cast who simmer sexual magnetism, makes the plot become believable.

Inside the theatre, at the end of a sun-filled summer afternoon at Glyndebourne, golden Mediterranean morning sunlight from an azure sky bathed the dove grey and honeyed stone belvedere and interior of the sisters’ villa above Naples. The lighting designed by Paule Constable, of the simple classical set by Vicki Mortimer with almost minimal furnishing in the first act, changes to the twilight of the afternoon as the plot unfolds, and the set becomes more lusciously cluttered and darker as the human realities become more serious.

Cos is an ensemble opera, but while the six characters each have an aria per act, the work requires singers who can play their roles as part of something greater than themselves individually.

The variety, wit and relief provided by the role of Despina calls for a consummate actress as well as a perceptive singer and Ainhoa Garmendia provides an earthy and enchanting tutor role to the sisters, matching that of Don Alfonso to their lovers. Anke Vondung gives a superb account as Dorabella, providing a far lighter and willing personality than Fiordiligi, less troubled by her infidelity and quicker to succumb to the seductive breeze that the disguised fiances blow over the sisters. Psychologically and musically, the role of Fiordiligi is one of the most difficult in all Mozart’s operas and Miah Persson sang it beautifully, despite one or two weakness on the lowest notes, and understood its depth; when she finally yields to Ferrando the effect was shattering.

Luca Pisaroni and Topi Lehtipuu gave ardent performances, vocally and dramatically. Nicolas Rivenq would have benefited from a shade more definition as it is difficult to accept the manipulation and influence Alfonso has over the young men.

The subtitle of Marriage of Figaro was ‘A mad day’; this could apply equally to the action in Cos fan tutte. Despite the breezy philosophical motto of Enlightenment in the final chorus, that we should not make excessive demands on fallible human beings and learn to accept and tolerate inevitable human weakness, we cannot overlook the emotional havoc that has been inflicted on all the characters, with the exception of Don Alfonso.

There is an assumption that the authors intended the resumption of the original partnerships, but Hytner’s ending is decidedly ambiguous, hinting that Ferrando will make a more coherent pairing than the one that exists. The final coming together is too brief and condensed to convince that all problems have been resolved. We sense that there is a lot more to be sorted out and explaining to be done.