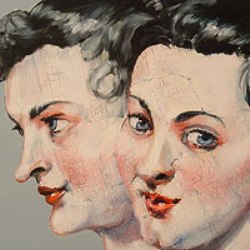 Holland Park is the ideal setting for Cos fan tutte in many ways. As the light of a summer’s evening fades to dark, so too the merriment of the early opera buffa scenes of the work turns to heavier, opera seria music.

Although not quite up to the consistent excellence of the earlier operas in the Holland Park season, this Cos is never less than entertaining, and one stand-out performer (the Fiordiligi) makes the journey well worth making.

Of the three collaborations between Mozart and Da Ponte, Cos is by far the most problematic. The story alone is enough to set a million women worldwide grumbling: two pairs of lovers are disrupted by a philosopher figure (Don Alfonso) who challenges the men to test the fidelity of their girlfriends. The women are unfaithful, and Alfonso wins the bet, tallying well with the Enlightenment’s views on love and sex. However, it can be hard to stomach, and so it proved in Annilese Miskimmon‘s production, where the women sometimes act as mindless bimbos.

She sets the opera by the seaside and in a hotel, sometime between 1890 and 1915; it isn’t quite clear. At one point a placard refers to ‘Queen and Country’, suggesting the Victorian era; the costumes vary in period; and at one point a reference is made to conscription, which suggests the First World War. Peter Rice‘s designs are the most attractive of the OHP season so far, with a gazebo centre-stage, an elevator at the back in Act 1, and deckchairs and a Punch and Judy show in Act 2. It’s all very appealing, and great fun, even if the big issues aren’t really addressed and the overall effect is a little vacuous.

The production is acceptable, but what let the evening down was Leo Hussain‘s conducting of the City of London Sinfonia. He brings out many interesting details, such as woodwind colours, but the lack of a clear beat made for some embarrassing discrepancies of timing between stage and pit. Even more problematic was the harpsichordist, who ought to have arpeggiated the chords in the recitatives far more, though she improved in Act 2.

The Opera Holland Park Chorus, however, has never sounded better, and the actors playing extras made characterful contributions as bathers, tourists and even a vicar.

Sarah-Jane Davies (in the part of Fiordiligi) is one of the best singers I’ve heard in this theatre, and reason enough to visit the production. From the start it was clear that she had a special vocal talent, shining in both the sisters’ duet and the trio Soave sia il vento, which was sublimely sung by all three artists in fact. The two highlights of the evening both come from Davies, however, in her two arias, and for different reasons. Come scoglio was breathtaking because of her ease in moving quickly between registers Mozart writes leaps in the vocal line of over an octave – while Per piet was breathtaking in its display of Davies’ stamina, singing perfectly in tune and with a wide range of dynamics. Here is a star of the future.

As Dorabella, Doreen Curran was lively and projected well, though perhaps her vibrato was a little too wide at times. Nevertheless, she was highly engaging and stood her ground well in the ensembles. The cast was distinguished by Lillian Watson as Despina, who retains both her looks and stunning coloratura. She acted everyone else off the stage, and in general put the opera into a higher gear after a slow start.

The men were less successful than the women, though still committed and more than acceptable. Thomas Walker seems to me to be just too young to be singing Ferrando at this stage. The beauty of his voice was apparent in a lyrically-sung Un’aura amorosa, but he tended to back off in the ensembles and doesn’t yet have quite the stamina needed for the role. The same goes for Toby Stafford-Allen, whose Guglielmo was occasionally powerful but not consistently so. Charles Johnston was a side-splitting Don Alfonso, and sang very beautifully (except in the recitatives, somewhat strangely).

Despite one’s reservations, this production has some highlights that make it a rewarding endeavour.