Only gamble what you can afford to lose, especially in love. 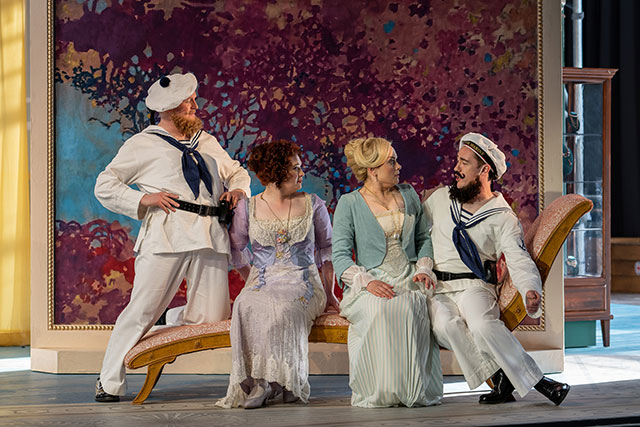 In his famous definition of the types of people who love each of Mozart’s operas, Bernard Levin said of Così fan tutte that it requires “…a streak of pessimism in those who respond most fully to it…” and this production by John Cox and Bruno Ravella goes directly to the heart of that response. First seen at the ‘original’ Garsington in 2004, the evolution of the staging is a fascinating one, obviously deeply thought through and sharpened with the understated elegance and emotional edge which defines the work of both the original director and his associate.

Garsington Opera’s more recent foray into the world of the Ferrarese sisters as the backdrop to the wedding from hell in 2015 did not please everyone, although it was blessed with very strong performances. This time, the production is stronger than some of the singing, although the ladies were a triumphant trio. Camilla Harris had been the understudy for Fiordiligi, and when the original soprano in the role had to withdraw through illness, she took over with sensational results. Dignified in manner, elegant in presence and scrupulously musical in interpretation, her arias were high points, fearlessly negotiating the challenges yet producing beautifully soft tone when required.

Her sister was adorably presented by Polly Leech, whose lovely, burnished mezzo is ideal for Dorabella and whose acting makes it so clear that she will be the one to fall first. They were the perfect pair, and the trio was completed by the vivacious Despina of Ailish Tynan, in a role which some find annoying but which in the right hands can be merely delightful; Tynan’s comic expertise and stage presence gave much pleasure and she was hilarious as the ‘notary.’

“…the ladies were a triumphant trio” 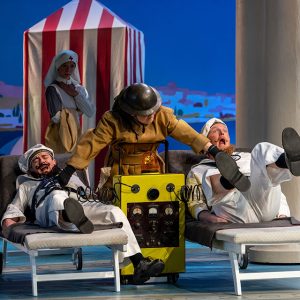 The men were a less powerful trio. Henry Waddington’s Alfonso is a wordly wise denizen of the gambling rooms, expertly managing the complex pairings he has set in motion; whilst his singing is always musical, his tone was at times a touch on the soft side on this occasion. Seán Boylan’s Guglielmo was a lively presence, his singing dulcet in tone, and what a delight to see and hear the exquisite duet ‘Il core vi dono’ sung around a locket rather than a pair of scanties. Gavan Ring was a suitably anguished Ferrando, ‘Un’aura amorosa’ sung with graceful phrasing if a little strained at times.

Anthony Kraus obtained superb singing from the small, beautifully characterized chorus, and in the pit Tobias Ringborg once again showed what an exceptional Mozartian he is; those who were here in 2016 for Idomeneo will recall his sensitive management of the singers and his ability to inspire the orchestra. The English Concert played brilliantly for him, with some really exceptional work by the wind section in particular.

The production’s setting is what one might call ‘how it should be done,’ with Paul Pyant’s lighting suggesting the light of the sunny south, at times either bright or dappled, and Robert Perziola’s designs evoking the laid-back atmosphere of turn of the century beach holidays or elegant villas where desirable ladies disport themselves languidly. In keeping with the overall tone of Cox’ original vision, the comedy is subtle rather than broad, and laced with the little touches which will be familiar to Garsington habituees from Bruno Ravella’s Intermezzo and Rosenkavalier. The ‘message’, if one may call it that, is one which unites the piece with Monterverdi’s Orfeo – the hero there was told by Apollo that he had gloried too much in his happiness and then bemoaned his misery excessively, and the protagonists here are also urged to see things in terms of the Age of Reason, balanced sense more valuable than any passionate extreme.

The ending of this opera is always problematic – do you go for ‘happy ever after’, or a sadly cynical reflection of the plot which sees no one satisfied? John Cox says that Mozart and da Ponte disappointingly avoided the ‘bitter ending’ for which Alfonso’s plot had paved the way, and here he provides a very different perspective on what lies ahead of the sisters – it’s a brilliant concept, deeply moving and perturbing, just as it ought to be. We are not going to give it away (as with the equally striking ending to the previous night’s Orfeo – shame on those who spilled the beans!) – much better for you to experience that frisson for yourselves.

• Further information on future performances can be found here.