by Sam Smith
published: 26 May 2014 in Opera and Classical Reviews
Tweet 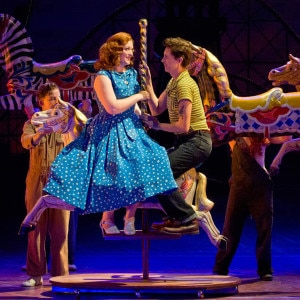 Many directors today choose to set operas in the ’50s and ’60s, and the reasons why aren’t hard to find. The period is still recent enough to retain a certain air of familiarity, but also ‘historical’ enough to maintain many of the traditional values and hierarchies on which the works originally played.

However, this is not the only reason why Phelim McDermott’s production of Così fan tutte, a joint venture between English National Opera and The Metropolitan Opera, sets the drama on Coney Island in the 1950s. To McDermott, amusement parks take us into a different realm with their magic, exuberance and allure, and it is this type of territory that the quartet of lovers enter as they all go on their extraordinary adventure.

The most successful aspect of the idea is the manner in which it encourages Don Alfonso to be played. He is presented as a ringmaster who has the dual roles of conjuror and compere. He is the former in that he, in a sense, ‘conjures up’ the whole scenario, and the latter in that he has to keep the show moving in the right direction. A real compere cannot control what happens in an act once it has started, but at its end must frame whatever has befallen and adjust accordingly to ensure that everything proceeds smoothly. Here, as each scene ends, a golden curtain drops to reveal Don Alfonso, surrounded by an ‘entourage’ of dwarfs, bearded ladies, fire eaters and sword swallowers, introducing his next steps as he might the next routine. Roderick Williams proves the perfect choice to carry off the role. Both his voice and acting are superb, and he attacks the part with both the zeal and gestures of one presenting a show.

In other respects the concept is more problematic. It lends itself to moments of great dynamism such as during the Overture when Alfonso and Despina call up the circus characters to tell us with signs that the opera is about to start and to be prepared for love, intrigue and poison. The difficulty, however, is that Così is predominantly about six people, and much of the piece is played out in arias and intimate moments that do not lend themselves to dynamic visuals. This production recognises this and does not strive to incorporate them into every scene, but this is where it falls between two stools. Sometimes so much goes on in scenes that it proves distracting, but because such dynamism is not sustained from start to finish, the circus elements there are can feel like an add-on.

Tom Pye’s sets are brilliant, with the sisters occupying adjacent chalets in a Coney Island motel that do prove successful in introducing an ‘in one door, out the other’ element. Overall, however, the chosen approach rather debases the story by ignoring its darker and cruel undertones. This is disappointing because behind all the glitz and the glamour, circuses can surely be sad and dangerous places themselves. While, however, the circus performers stare at the characters in scenes when they are at their most vulnerable, this idea is not exploited as much as it could be.

Besides Williams, the two other standout performances come from Christine Rice as Dorabella and Mary Bevan as Despina. Rice’s mezzo-soprano is possessed of the richest of hues, and she shows a particular penchant for comic timing in a perfectly measured and multi-faceted performance. Bevan brings a pleasing sound and excellent focus both to those moments when Despina must enunciate her philosophies with crystal clarity, and those when she needs to sing at full throttle. In Act I Kate Valentine as Fiordiligi, Randall Bills as Ferrando and Marcus Farnsworth as Guglielmo somewhat trail in the wake of the other three, although Farnsworth’s ‘Non siate ritrosi’ may be more successful than Bills’ ‘Un’aura amorosa’ mainly because the former aria works better with the tone of the production at this point. In Act II, however, all three really get into their stride with Valentine’s ‘Per pietà, ben mio, perdona’ and Bills’ ‘Ah, lo veggio’ standing out in particular.

This Così fan tutte is conducted by Ryan Wigglesworth while Jeremy Sams’ English translation, in which we learn that ‘Latin is not a language to chat in’, is undoubtedly smooth and witty. Overall, the production is entertaining, but there is nothing here to rock the boat, and the ending chosen rather sums up the evening as a whole. While purporting to be innovative and outrageous, it ultimately treads a very safe path.