As Longborough’s 2021 season moves beyond Wagner, a new venue takes centre-stage and the fun flows freely. 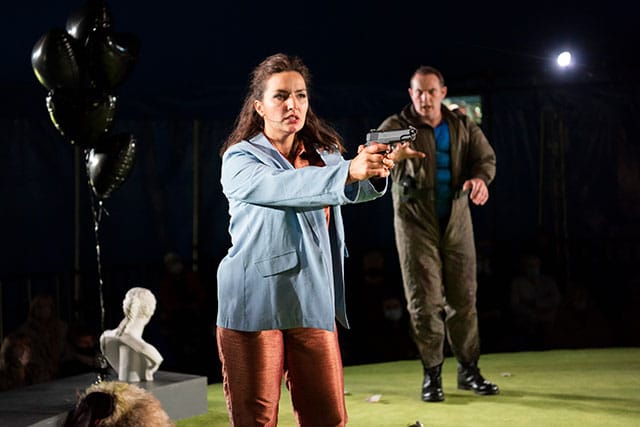 Following Longborough Festival Opera’s concert performances of Die Walküre, the action for the season’s other three operas moves to its newly erected ‘big top’, designed to aid social distancing by creating a larger and more open space. The first of these constitutes a somewhat offbeat production of Così fan tutte, in which ideas are explored so dynamically that we feel just as engaged with the scenario as we are undoubtedly entertained by it.

This Così is not handed a specific time and place, but the costumes and decor hint at some point in the 20th century. Director Sam Brown felt that in a post-Freudian world it was difficult to believe that the sisters did not recognise the ‘strangers’ as their lovers, at least on some level. He wished to play on this idea, and it does affect the dynamics of the story because no longer is each simply asking “should I cheat on my lover with this handsome stranger?” but also “should I swap boyfriends with you my sister, for the night?”. In line with this interpretation, the opera is subtitled in this English translation by Amanda Holden as ‘Women are human’ as opposed to the more usual ‘Women are like that’.

For all of the production’s innovation, however, a large part of its success is attributable to its getting the basics right. First and foremost, it puts the six characters centre-stage so that all interest derives directly from them. This contrasts markedly with the Royal Opera House’s and English National Opera’s current productions. Both directors, Jan Philipp Gloger and Phelim McDermott, took the view that the opera sees the quartet of lovers thrust into an extraordinary adventure, and so created fantasy settings (the theatre and 1950s Coney Island respectively) for the action. In the process, however, they created overly heavy infrastructures comprising lavish sets and (in one instance) circus performers, with the consequence that the people who the opera is really about became lost amidst the distractions. With just six people performing ‘in the round’, this version lets the characters speak for themselves, while Brown’s exciting direction maximises on the opportunities that this affords.

The dynamic between the three men is rendered strongly from the outset as Don Alfonso dominates the soldiers by winning at cards and performing magic tricks they cannot explain. The two younger men also try to assert their masculine credentials by downing their champagne or pouring the whole bottle of it on each other and themselves. The odd extra sentence is shouted or line of music inserted (a brief excerpt from the ‘bridal chorus’ in Lohengrin precedes the final scene), and these frequently come together to create some priceless moments. As the sisters and Don Alfonso sing ‘Soave sia il vento’, Despina (an excellent Lizzie Holmes) bursts on to announce that the soldiers have forgotten a backpack. This prompts one of them to return and retrieve it discreetly as they neither want to interrupt the beautiful singing or repeat the grand farewell they have just gone through. This illustrates one of those little awkward moments in life to which we can all relate, and tellingly the soldier gives a small nod to the sisters as if he is thinking “I hope they haven’t seen me, but if they have it will look really weird if I’ve shown no acknowledgement”. 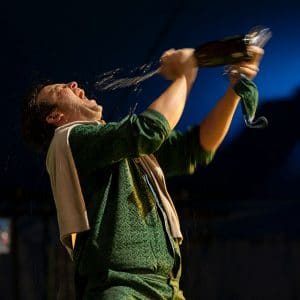 There are many broadly contemporaneous references so that the men ‘poison’ themselves with Toilet Duck. Similarly, the Act II scene in the garden becomes ‘Don Alfonso’s Fancy Dress Love Disco’, with the surtitle screens during the interval announcing that we are all invited, and the costumes proving more outrageous than ever. Overall, social distancing requirements are managed well so that Despina does not attach anything to the men when supposedly giving them magnetic therapy. Instead, she applies it via radio waves with Fiordiligi, Dorabella and Don Alfonso donning headphones so that they will supposedly avoid receiving the treatment. However, Act I’s final scene is a key one in any production in revealing, through the man that they choose to fuss over, whether the women at this stage are still sticking with their original partner or already moving their attentions elsewhere. This production generally suggests the former but it does not seem to be a point made particularly clearly, which is hardly surprising when the women cannot go near the men and end up circling them.

“…“should I swap boyfriends with you my sister, for the night?””

The music is performed by The Barefoot Band, conducted by Lesley Anne Sammons who also created a new arrangement of the score. The ensemble comprises recorders, clarinet, accordion, keyboard, double bass, percussion and no upper strings, and while social distancing inspired the use of the group in this instance they had already comprised the orchestra for La Calisto here in 2019. The arrangement may not be to absolutely everyone’s taste, but it is hard to believe that anyone with a willingness to hear the score in a new way will not thoroughly enjoy it. With there being major roles for accordion and keyboard, certain arias go with a ‘bossanova’ beat, while the arrangement of ‘Bella vita militar!’ really enhances its credentials as a good old marching song, a feat made all the more extraordinary by the fact that, since this production features no chorus, only the soloists are there to sing it. Despina’s ‘In uomini, in soldati, sperare fedeltà?’ really goes with a swing, but the style of arrangement always matches the piece in question so that Fiordiligi’s ‘Per pietà, ben mio, perdona’, in which she literally sheds her defences by removing the armour that had constituted her fancy dress costume, feels beautifully tender. In fact, one of the instruments that shines throughout the evening is the recorder when Sammons admits that it initially seemed more obvious to employ, and arrange for, the flute.

It is a strong cast all round, and the ensemble singing is extremely tight and pleasing. As Fiordiligi, Anna Patalong’s beautiful soprano makes all of her utterances seem particularly heartfelt, while Idunnu Münch makes Dorabella feel feisty enough, without reducing her to a simply flirtatious and two-dimensional being. The absolute standout performance, however, comes from John Molloy as Don Alfonso who also played the part for Nevill Holt Opera in 2019, and previously portrayed Masetto for ENO. He is possessed of a very smooth and powerful bass, and he combines the ability to command the proceedings thoroughly when centre-stage with the skill to always show how he is eyeing up the situation when he is more on the sidelines.

There are occasions when we do not so much feel for the characters as feel entertained by them, but this does change in Act II as both ‘Il core vi dono’ and ‘Fra gli amplessi’ genuinely reveal the dilemmas of the respective characters. It is here that we really start to appreciate the complex nature of them, as they involve the potential tensions between love, duty, loyalty, freedom of choice and freedom of expression. At the end of ‘Fra gli amplessi’ with Ferrando (an effective William Morgan) Fiordiligi gives a shrug as if to suggest “that’s how it is”. Interestingly, it is not clear if this is directed at the audience generally or specifically towards Guglielmo (an engaging Marcus Farnsworth) who is watching everything.

Given the ambivalent nature of so much that is in Così fan tutte, it does not always pay to wrap things up too neatly at the close. Nevertheless, when it is the sharpness of this production that makes it what it is, the ending still feels as if it possesses a degree of ambiguity for ambiguity’s sake as opposed to offering a conclusion that feels as strong as the other points that are made across the evening. It certainly contains many good ideas as well into the finale the four principals are still gazing at idealised busts of the opposite sex. Then, however, each stares at a classical statue that would seem to symbolise themselves, and thus introduces elements of both Narcissism and self-reflection. These statues are finally defaced and piled up in the middle of the stage. While, however, this clearly symbolises removing people from their pedestals and appreciating them for the human beings they really are, it is not clear how much love derives from reaching this conclusion when the emphasis on recognising people’s basic humanity would seem to lend itself to joy and celebration. One is left feeling perhaps that, though these lovers have learnt a lesson, it is one they would have been better off not knowing. That is a perfectly valid conclusion for the opera in general, but not one that entirely flows from what the rest of this production suggests.