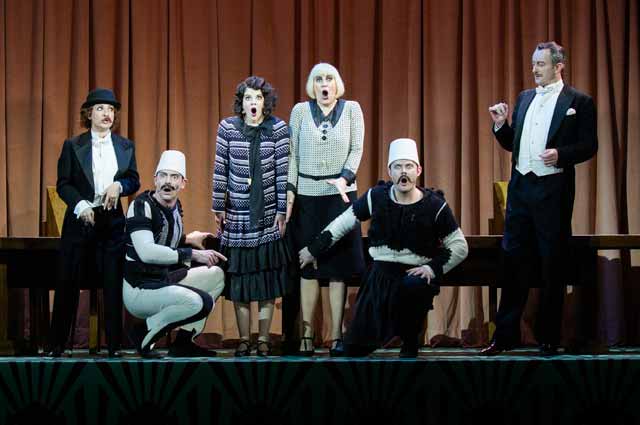 There are many ways to stage Così fan tutte and for a long time a lot of directors chose to set it in the modern day. This approach was epitomised by Jonathan Miller in his 1995 production for the Royal Opera when it still felt innovative to see mobile phones, laptops and Starbucks coffees on a stage, and the items helped to delineate the plot’s hierarchies because they were rare enough to act as symbols for a certain class of person. By the time of its final revival in 2012, however, these same devices were so widespread that they no longer said anything important, and had by then been seen a thousand times before on stage.

The consequence was that even updates to the modern day started to feel tired, leading to a new wave of productions that set the opera in virtually fantasy realms and thus emphasised how the characters are thrust into an extraordinary adventure. Phelim McDermott placed the action on Coney Island for English National Opera in 2014, while Jan Philipp Gloger chose the setting of a theatre for his 2016 version for the Royal Opera, with both places being renowned for their magic, exuberance and allure.

Other productions, however, have taken a different approach, choosing to set the action at different times in the past, with each finding a unique justification for their chosen era. In 2009 English Chamber Opera set the action in the 1950s arguing that many women would still have led sheltered lives then, so this relatively recent period still maintained the same basic values as the original. In 2016 West Green House Opera opted for the Second World War as this was a time in which women took on traditionally male roles and found a greater degree of independence, thus explaining the sisters’ inclination to follow their own needs and desires.

Adele Thomas’ production that now appears at Nevill Holt Opera, having originated with Northern Ireland Opera, opts for an Art Deco staging that sets the action in interwar America. This works because ‘The Jazz Age’ was an era in which people, after the horrors of the First World War, were inclined to be hedonistic and follow their more immediate passions and desires. At the same time, the period was still close enough to a more conservative past for people to feel the tension between remaining loyal to loved ones, especially when they might have been parted during the War, and doing as they pleased in the moment. In this way, the second half of the Overture sees several couples grace the stage, each in a different state of bliss or confrontation as they highlight the complex nature of relationships.

The overall setting for the action is a party, with the chorus acting as its revellers, so that Don Alfonso sets the challenge to Ferrando and Guglielmo as if late into the evening they got drinking and chatting and this is what arose. In fact, the party backdrop works well for a variety of reasons. When McDermott set the action on Coney Island he introduced circus performers to add to the sense of intrigue and danger but, because they could hardly be used for so many of the intimate arias and duets, when they did take centre-stage they felt like an add-on rather than seeming integral to what was being said. Over the course of a long party, however, it seems likely that individuals would spend much of their time ducking into side rooms away from the central action. As a result, it feels entirely natural only to be reminded of the wilder backdrop at intervals, and when the chorus sing ‘Bella vita militar!’ as they wave the men off to war it really feels like the type of drunken ritual that might occur at such an event.

Although the production goes nowhere near as far as Gloger’s in this respect, there is an overt theatricality to the proceedings as Fiordiligi sings ‘Per pietà, ben mio, perdona’ under flashing footlights, while in Hannah Clark’s set two proscenium arches stand within the theatre’s permanent one. This also creates two tiers so that Guglielmo not only observes the entire encounter in which Ferrando successfully woos Fiordiligi from the lower level, but also the scenes that lead up to this. In this way, he grows increasingly angry, and has to be increasingly restrained by Don Alfonso, as he watches Fiordiligi go through the various states of mind that lead her to the point where she does embrace Ferrando.

The production is highly dynamic as Dorabella sings ‘Smanie implacabili’ while drinking from a champagne bottle, and the sisters brandish two of these as they chase the ‘Albanians’ around the stage when they first appear. There is subtlety too, however, as the characters are delineated well so that even as early as Guglielmo singing ‘Non siate ritros’ one can see Dorabella start to feel intrigued by him while Fiordiligi, in contrast, is put out by the attentions shown by Ferrando. Then later during ‘Fra gli amplessi’ one senses that it is their respective feelings of pain that bring them together, rather than an overt desire for revenge on the latter’s part. As the ‘Albanians’, the men wear almost Pierrot style costumes with fezes, which works because at such a party people would have been more interested in the sense of exoticism than the authenticity. These contribute to the black and white aesthetic of all of the principals’ costumes, with Don Alfonso wearing a dinner jacket and, presumably significantly, Fiordiligi’s straight-laced outfit containing far more white than Dorabella’s more fashionable dress.

Much of the singing is strong, with the trio ‘Soave sia il vento’ standing out in particular. The best performance of the evening, however, comes from John Molloy as Don Alfonso, whose powerful bass is especially smooth, and whose persona is just right for the part. When most portrayals of the trickster firmly opt to go one way or the other, he reveals that rare ability to put Don Alfonso right at the centre of the action while also making him feel like a detached manipulator. He possesses both the appearance and dignity of Lermontov (a Diaghilev-style character) from The Red Shoes, and at one point he has a hand on Guglielmo and a foot on Ferrando to keep them ‘dead’ after they have taken the ‘poison’, in a pose that looks dreadfully uncomfortable and yet which he carries off with flair.

Carolina Lippo fully embraces the soubrette role of Despina, making the maid a particularly manipulative figure as her philosophy of following her own desires equates far more to making money than it does to enjoying love. Not only does she ensure big payments from Don Alfonso both towards the start and at the end, but she sings ‘Una donna a quindici anni’ while running rings around a sleeping party-goer as she smears lipstick on his face and steals money from his jacket.

Alexandra Lowe as Fiordiligi reveals an accomplished soprano that is extremely vibrant but feels quite direct because of the strength of the sound. It also works well with Katie Coventry’s Dorabella, whose mezzo-soprano seems a little more subtle and reserved, though her tone remains quite sumptuous. Martin Hässler asserts a firm and secure bass-baritone as he gives the impression of a Guglielmo who thinks rather too highly of himself, while Nick Pritchard is both a dynamic and sensitive Ferrando. He sings ‘Un’aura amorosa’ with a notably empty glass, to show how he may only need a breath of love but at the moment he cannot get that required drop of champagne. Nicholas Chalmers also conducts the Royal Northern Sinfonia, which along with the Britten Sinfonia is one of NHO’s two orchestral partners, very well.

So do the lovers end up with their original partners, or remain in their newfound couples? It would be a shame to give the answer away, but the very fact that one has to keep their eyes peeled to spot who is exactly with who when the lights go down suggests that the ambiguity and confusion surrounding the affair are more important than the actual result!

Nevill Holt Opera’s 2019 season continues until 2 July, while it has already announced that a Weekend Winter Gala will take place on 30 November and Don Giovanni will form part of its 2020 season. For full details and tickets visit the designated website.