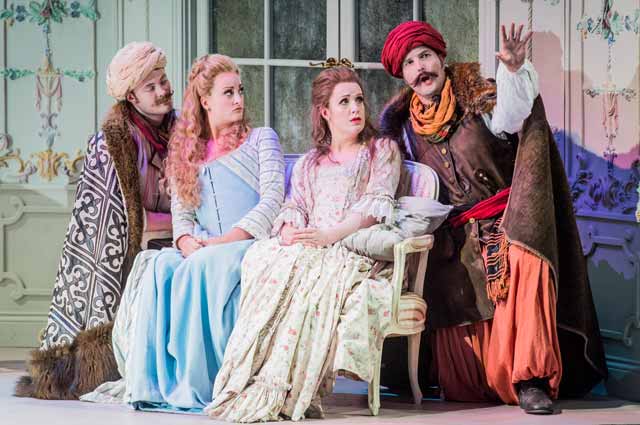 There are a variety of ways to stage Così fan tutte, with many productions over the past fifty years choosing to update it to the modern day. This approach was epitomised by Jonathan Miller’s 1995 version for the Royal Opera, which included mobile phones, laptops and Starbucks coffees at a time when all were rather novel. Nearly twenty-five years later and these items are still around, but feel run of the mill, meaning that even updates to the modern day can now seem tired.

Several directors have recently responded to this difficulty by interpreting the opera as a story in which the quartet of lovers are thrust into a fantasy realm as they go on an extraordinary adventure. This approach was taken both by Phelim McDermott for English National Opera in 2014 as he placed the action on Coney Island in the 1950s, and Jan Philipp Gloger for the Royal Opera in 2016 who chose the setting of a theatre.

Director Oliver Platt has gone the other way in his new production for Opera Holland Park by reverting to the original eighteenth century setting. Many productions still utilise this including Holland Park’s previous effort from Harry Fehr in 2012, which presented the entire opera as an experiment in a bell jar. In Platt’s version, however, the idea of placing the drama in the composer’s own time receives a greater emphasis so that this becomes not only an opera by Mozart, but one about his experiences. The staging alludes to the notion of The Grand Tour, with Mozart having done his own (of sorts) through his time spent in Italy between 1769 and 1773.

As The Grand Tour was a widespread pursuit for those of a certain class, this production emphasises the commonality of the experience of the main protagonists by placing it alongside other people’s similar ones. So, when Dorabella and Fiordiligi say goodbye to Ferrando and Guglielmo as they head to war, all of the women in the chorus wave farewell to their own men in exactly the same way. As a result, the story of this quartet of lovers could be the story of many others, which for an opera whose thesis is ‘così fan tutte’ (as do they all) seems rather appropriate.

The staging carries off the moments of sorrow and humour reasonably effectively, and there are plenty of fine touches. For example, at the start of the scene in which Don Alfonso, Dorabella and Fiordiligi sing ‘Soave sia il vento’ we see Ferrando and Guglielmo sneak out of the boat that they previously entered to show how they are not going off to war at all. It certainly feels as if many ideas have gone into this production but, while the ‘strike rate’ may be high, not all of them work. For example, every now and then the characters all adopt exaggerated poses as Rory Beaton’s lighting substantially alters. Touches like this do not always aid the flow because they undermine the overall consistency in approach. 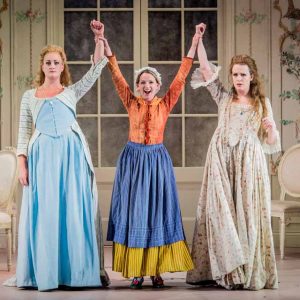 Any production of Così fan tutte must decide on the narrative it wishes to tell, and then work out how to execute each scene in order to further it. Here, the fact that as early as Guglielmo’s ‘Non siate ritrosi’ Dorabella is clearly warming to him and Fiordiligi to Ferrando suggests the story is very much going in one direction. This is undermined, however, by the finale to Act I, which initially places the four back in their original pairings before swapping them again after the men have recovered from the ‘poison’. The fact that even when playing the imposters the men’s turbans come off pretty quickly so that they are hardly disguised at all does suggest many things, but leaves us uncertain as to the real point. However, the fact that their costumes could as easily be Turkish as Albanian provides another Mozart link by referencing Die Entführung aus dem Serail.

When we finally see the ending (which it would be wrong to give away) everything we saw precede it makes sense, but it is questionable whether the pay-off justifies feeling all at sea for so long prior to this. The close also leaves one wondering whether, given what the opera is really about, this is the only way in which any Così should ever be allowed to finish, or if this is a rather arbitrary and contrived conclusion. Nevertheless, it is possible to side with the first of these two interpretations because, watching the finale to Act II at least, one is genuinely left feeling from both the music and language that this story could not conclude in any other way. In addition, no criticisms that could be levied against the staging seriously undermine its overall effectiveness. With Alyson Cummins’ set presenting a light, tasteful Rococo interior, everything looks gorgeous, and with the majority of the action being focused within this room that occupies the centre of the stage, the requisite intimacy is achieved.

As a result, we see a reasonably effective staging combine with some superb vocal performances to produce a hugely enjoyable evening. Nick Pritchard as Ferrando is possessed of an extremely pleasing tenor, and gives a moving account of ‘Ah, lo veggio’. Alongside him, Nicholas Lester asserts his firm and controlled baritone to strong effect as he gives the impression of a Guglielmo who thinks rather too highly of himself.

It is, however, the women who take us to another realm. Eleanor Dennis’ Fiordiligi is outstanding, as her beautiful soprano proves as sweet as it is vibrant. It possesses the strength to fill the space, and the shape and precision to make her performance of ‘Per pietà, ben mio, perdona’ feel nothing short of perfect. As Dorabella, Kitty Whately’s mezzo-soprano, with its sumptuous hues, complements Dennis’ soprano extremely well. She also contrasts her bubbly character with her sister’s more steadfast demeanour to good effect.

Sarah Tynan is a brilliant Despina, asserting her excellent soprano and revelling in playing the doctor and notary as they sport some superb costumes. It is not unusual for Don Alfonso to feel his plan is being slightly derailed by Despina going about things in her own way, precisely because she possesses her own mind. Here, however, it almost seems as if she is controlling affairs more than he is although, thanks to Peter Coleman-Wright’s subtle acting, this does not reduce Don Alfonso to being a mere cipher. During ‘Soave sia il vento’ he looks just as genuinely sad as the women are that the men should be departing for war, while still making it clear that he alone of the three is putting on an act. Similarly, when the men ‘poison’ themselves his own face shares their pain and sorrow, and he is actually more convincing than they are because he is the more skilled at deceiving. By the time we have added in Dane Lam’s intricate conducting of the City of London Sinfonia, it is clear that Opera Holland Park, following hot on the heels of its success with La traviata, has another hit on its hands.