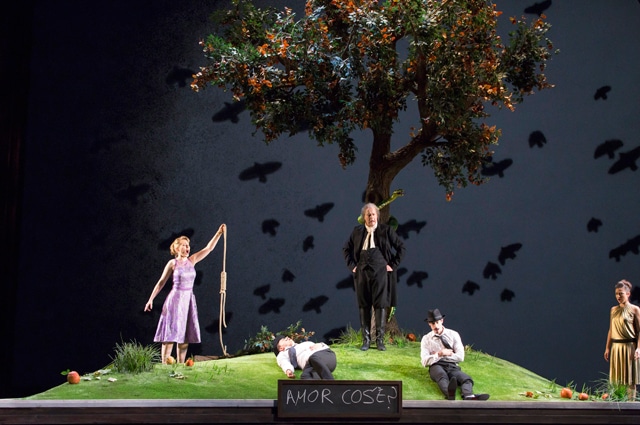 Jonathan Miller’s modern day production of Così fan tutte for the Royal Opera was hilarious at its premiere in 1995. Not only did it feel innovative to see mobile phones, laptops and Starbucks coffees on a stage, but these items helped to delineate the plot’s hierarchies because they were still rare enough to act as symbols for a certain class of person. By the time of its final revival in 2012, however, these same devices were so widespread that they no longer said anything important, and had by then been seen a thousand times before in operas.

If even updates to the modern day, however, can now feel tired, it leads directors to ask where to go next. The solution for director Jan Philipp Gloger in his new production for the Royal Opera feels similar in essence to that of Phelim McDermott for his 2014 version for English National Opera. McDermott set the action on Coney Island in the 1950s, feeling that amusement parks can take us into a different realm with their magic, exuberance and allure, and that it is this type of territory that the quartet of lovers enter as they go on their extraordinary adventure. Gloger seems to follow a similar philosophy only in his case the setting is a theatre, which offers even more opportunities perhaps for Don Alfonso to ‘conjure up’ effects and hence engineer events.

The Overture is accompanied by the six principals appearing in eighteenth century costume and introducing themselves in turn by bowing in a style that befits the character of each. Don Alfonso directs everyone to move and turn appropriately, and it makes us initially think that we will witness a traditional staging in which eighteenth century etiquette and behaviours will play a key role. As soon as it is ended, however, the quartet of lovers appear in modern dress (those in eighteenth century costume were clearly doubles) and clutching red shiny programmes as if they are attending a night at the opera. Continuing in this vein, Don Alfonso breaks the news to the women that the men are to leave for war as the sisters wait for them in the theatre foyer. As they agree to say goodbye this area is rolled back to reveal a station, complete with train ready to depart and hoards of other people saying farewell to loved ones.

The point that this is a theatrical set is emphasised by the fact that as the women turn their backs Don Alfonso (who remains in the same eighteenth century costume for most of the evening) reveals the crowds of parting lovers to be extras by signalling that they can break their poses. Throughout we see him chatting with stage hands as he plans the next effects with them, and the fluidity and slickness of direction is commendable. It means that Don Alfonso can be on or off the stage in a second, leading him to be present for moments when he might not normally be, and absent from others where he usually would, as he goes about moving everything forward.

The difficulty is that to feel for the characters we must be convinced that the women really do believe that their lovers are going to war and are at heartbroken at the prospect, and it is difficult to accept this when they are suddenly transported to a clichéd station platform. This does not mean that stagings can never be metaphorical or symbolic, but there comes a point when the emphasis placed on magic and artifice becomes a severe barrier to us feeling anything for the characters as real people with real emotions.

On its own, the station scene might just be believable precisely because Don Alfonso has planned it with the extras to look authentic. As we go deeper into the drama, however, we are presented with a whole series of areas including dressing rooms, costume departments, bars and two theatre sets depicting gardens. Each is designed (by Ben Baur) to make a new point concerning either relationships or artifice (one set depicts Eden suggesting temptation, the other presents a ‘purer’ Arcadian vision), but by the end we are so steeped in the metaphors and commentaries that we have lost sight of the people at the heart of the drama. 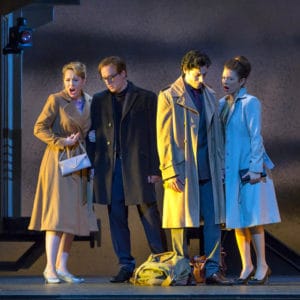 There is a particular problem in the presentation of Despina. In the original she is a maid to the sisters, which not only makes her subservient to them, but also means that she knows a wealth of private things about them. Here she is a simply a creative type, involved it would seem with costume and set design. The only allusion to her being a maid is that she is first introduced as a barmaid at the theatre’s watering hole (presumably trying to earn some extra money) but even here there is nothing to reveal that the sisters have any hold over her.

This does not mean that none of the ideas work. Indeed, this production feels more successful than McDermott’s, and the staging does reveal some ability to transcend its imperfections. Many of the images created by the direction are visually arresting and often extremely measured. For all of the humour to be found in the opera, Così is predominantly about six people, and Gloger’s direction often works well with the fact that much of the piece is played out in arias and intimate moments. One particularly successful scene is that in which Ferrando successfully woos Fiordiligi. This is because here we really do believe that the two when they meet are overcome with sadness, and that their coming together is a reaction to this rather than the product of a preconceived plan for revenge. The fact that the set changes at the end of the scene so that Fiordiligi disappears and Ferrando is suddenly left alone is also clever as we can almost see him thinking to himself ‘did that really just happen?’.

This is also a production where music and direction can fit together seamlessly. Conductor Semyon Bychkov may not necessarily be known as a Mozartian, but he provides a very silky and smooth account of the score. In particular, the effect at the station as the quartet of lovers say goodbye is deeply moving, as four vocal lines rise from four people moving slowly away from each other.

The cast, which includes Angela Brower as Dorabella, Alessio Arduini as Guglielmo and Sabina Puértolas as Despina, is strong. The principals have all been advertised as ‘young and up-and-coming talent’ and, this being the case, we have much to look forward to from such a generation of singers. Three performances stand out in particular, and the first is that of Corinne Winters as Fiordiligi. This may be her Royal Opera debut, although she has appeared for English National Opera several times playing Teresa in Benvenuto Cellini and Mimì, but she seems totally at ease as she ensures that ‘Per pietà, ben mio, perdona’ becomes a definite highlight of the evening. Her voice is extremely rounded so that the high notes almost do not seem to be because they feel so rich and full. As Ferrando, Daniel Behle delivers ‘Un’aura amorosa’ and ‘Ah, lo veggio’ with a sensitivity and smoothness of line which make them deeply moving.

The highest accolades of all, however, go to Johannes Martin Kränzle who, with his excellent baritone and superb timing, presents Don Alfonso as the ultimate trickster. He may be well established in mainland Europe but he could still be classed as ‘up-and-coming’ in the UK and America. He only made his Metropolitan Opera debut in 2014 as Beckmesser, having played the part for Glyndebourne in 2011, and this is his Royal Opera debut. Based on what we have already seen of him, it is enough to say that his Beckmesser here next March should not be missed at all costs.

There are lots of ideas in this multi-layered production of Così, and it may be better to have one in which a significant proportion of the many ideas presented work, than one in which there are far fewer to start with. One particularly clever move concerns the way in which late on an illuminated sign reading ‘COSI FAN TUTTE’ has a few lights extinguished to read ‘COSI FAN TUTTI’. This sums up Mozart and Da Ponte’s intentions perfectly because surely they were deliberately presenting the male perspective that ‘women are all the same’, and leaving us to infer from what we saw that men are too.

However, the wealth of points that the production makes can be to the detriment, on some occasions at least, of offering us a clear scenario in which we can feel for the protagonists. Ambiguity is built into many places so that when the men first meet the women in disguise Ferrando and Guglielmo each circle both sisters, while the couples swap several times during the Finale to Act I as even Don Alfonso and Despina become caught up with them! The ending chosen, however, seems to be ambiguous for ambiguity’s sake, and the same could be said for a significant amount of the production as a whole.

Così fan tutte will be broadcast live to selected cinemas in the UK and worldwide on 17 October, while some cinemas will also show encore screenings over subsequent days. For details of participating venues visit the Royal Opera House Live Cinema Season website. The opera will also be broadcast on BBC Radio 3 on 12 November 2016.