by Sam Smith
published: 3 May 2020 in Opera and Classical Reviews
Tweet 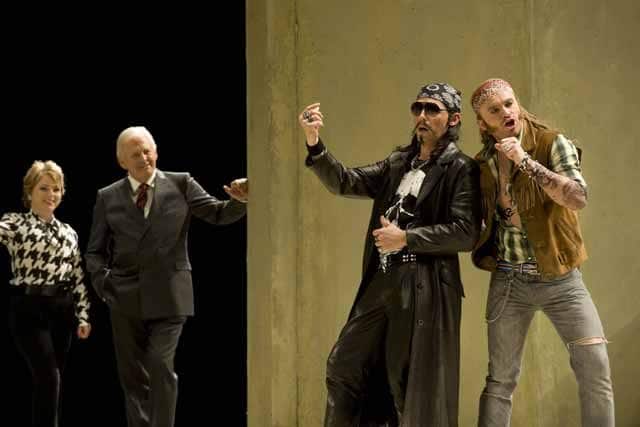 The Royal Opera House has made the 2010 revival of Sir Jonathan Miller’s 1995 version of Così fan tutte available online until 10 May. Under the baton of Thomas Hengelbrock, it is a strong production and boasts some persuasive performances. Sir Thomas Allen, who by the time he retired from singing last year had played Don Alfonso for fifty years, combines a cool, manipulative presence with a loveably roguish persona, while Rebecca Evans is clearly a Despina who has seen it all before. There is a pleasing restraint to much of the singing so that the trio ‘Soave sia il vento’, with Jurgita Adamonytė as Dorabella, Maria Bengtsson as Fiordiligi and Allen feels extremely well balanced. As Ferrando, Pavol Breslik’s performance of ‘Un’aura amorosa’ is also quite sensitive, although Stéphane Degout, appropriately enough, still gives an impression of a Guglielmo who thinks rather too highly of himself.

There is, however, a particular reason for recommending watching this production, which is that it represents a specific era in more ways than one. With its contemporary staging, it shows what was perceived to be the height of modernity in the mid-1990s, but it also reveals a time in which modern day productions of the work were far more in vogue than they are now.

Così fan tutte is an opera that lends itself readily to being presented in a variety of periods. Both Opera Holland Park’s 2012 and 2018 productions, directed by Harry Fehr and Oliver Platt respectively, gave the piece its original eighteenth century setting, although Fehr also presented it as an experiment in a bell jar. Other productions have chosen to set the action at different times in the past, with each finding a unique justification for its chosen era. In 2009 English Chamber Opera set the action in the 1950s arguing that many women would still have led sheltered lives then, so this relatively recent period retained the same basic values as the original.

In 2016 West Green House Opera opted for the Second World War, as this was a time in which women took on traditionally male roles and found a greater degree of independence, thus explaining the sisters’ inclination to follow their own needs and desires. Last year Nevill Holt Opera, in a production that originated with Northern Ireland Opera, opted for an Art Deco staging that set the action in interwar America. The idea was that ‘The Jazz Age’ was an era in which people, after the horrors of the First World War, were inclined to be hedonistic and follow their more immediate passions and desires. At the same time, the period was still close enough to a more conservative past for people to feel the tension between remaining loyal to loved ones, especially when they might have been parted during the War, and doing as they pleased in the moment.

“If Miller could reflect the modern day in 1995, then surely someone can do so today”

Miller, however, set the action in the modern day so that his production featured mobile phones, laptops and Starbucks coffees. In 1995 these things felt quite new, both in everyday life and on a stage, but it was not just the novelty factor that carried the evening. In the mid-1990s these items defined a certain class of person, and hence could be used to identify the wealthy yuppie-style businesspeople that Miller chose to make his characters. By 2010 such items were so widespread that it already felt monotonous to see them in an opera house, and they no longer said anything important about anyone. Interestingly, in 1995 the costumes were Armani-designed, but as the production ‘evolved’ other design houses provided the clothing including, on one occasion, Marks & Spencer. This also felt symbolic of the idea that what was once the preserve of the wealthy was now open to everyone.

All this said, it was only the final revival in 2012 that really felt tired, and so this 2010 revival is worth seeing because we do not see productions like this anymore. Of course, Così fan tutte is performed so often that there is always going to be someone somewhere presenting a modern day staging, but it is not the general direction in which major opera houses have taken the work since.

The most recent wave of productions have set the opera in virtually fantasy realms and thus emphasised how the characters are thrust into an extraordinary adventure. Phelim McDermott placed the action on Coney Island for English National Opera in 2014 (in a co-production with the Metropolitan Opera), while Jan Philipp Gloger chose the setting of a theatre for his 2016 version for the Royal Opera, with both places being renowned for their magic, exuberance and allure.

Why has this change in approach come about? If Miller could reflect the modern day in 1995, then surely someone can do so today. My own theory is that what changes have occurred in both technology and society in the past twenty-five years are not easy to represent visually. An iPad and iPhone could replace a laptop and what we now term a ‘brick’, but as they essentially appear like smaller versions of the same thing the change would hardly feel clear, and some eras simply have a more distinct look than others. This problem even plagued the Miller production since the 1990s presented no obvious disguise for the soldiers that spoke about that time, and they ended up looking, rather awkwardly, like 1970s hairy bikers. In contrast, had a 1950s setting been chosen they could have been made into Teddy Boys who clearly represented that age.

That is why it seems many directors have opted for a different approach, and the question is should this worry us? In many ways, the answer is ‘no’ as both the McDermott and Gloger productions have their merits. However, the act of thrusting us into fantasy realms in itself emphasises the artificiality of the situation, which can in turn make the characters feel less relatable. In both cases, the difficulty manifests itself throughout, but comes across most clearly in the ending. The one opted for by Miller (which it would be wrong to give away) somewhat implies that there was never any love between any of these characters, and flows naturally from what we have seen throughout. The endings to both McDermott and Gloger’s productions feel more arbitrary because when the focus has been on the adventure in its own right, the destination, it seems, has been less considered. It is Miller’s production that really speaks to us about preoccupations such as aspiration and isolation to which we can all relate, and for that reason it is worth watching while you have the chance.