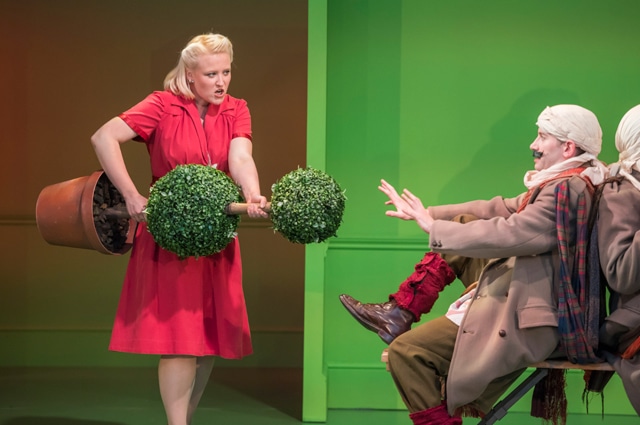 It is a truth universally acknowledged that the level of success of a production of Così fan tutte tends to be in inverse proportion to the scale on which it is staged! That, at least, seems to be the case based on those versions that have appeared in London in recent years. English National Opera has twice (in 2009 and 2014) introduced productions that have purported to be innovative or outrageous, but which have failed to achieve all that was intended, while Jonathan Miller’s version for the Royal Opera was brilliant on its premiere in 1995 but has become more dated and less funny with every revival (a new production arrives at Covent Garden in September). English Chamber Opera, on the other hand, offered a  dynamic interpretation, Opera Holland Park revealed an exceptionally intelligent way of making sense of the work, and now West Green House Opera introduces a production whose small scale walks hand in hand with a grand ambition for the piece.

Director Victoria Newlyn sets the action during the Second World War, and this proves to be a very clever move. On the one hand, Dorabella and Fiordiligi could have led almost as sheltered lives in the 1940s as they would have done in the eighteenth century. On the other, the War was a time in which women took on traditionally male roles and found a greater degree of independence, thus explaining the sisters’ inclination to follow their own needs and desires, especially when egged on to do so by Despina.

The Overture is accompanied by a series of wartime images including propaganda adverts and photographs of village dances, while throughout the drama characters introduce posters that in proclaiming (for example) ‘Your Courage, Your Cheerfulness, Your Resolution Will Bring Us Victory’ offer ironic commentary on the action. Colin Falconer’s set consists of a series of bright green walls that can be moved around to create different areas. At the start they represent Weymouth barracks where the two men are ‘residing’, and appropriately enough the space does feel reminiscent of St Aldhelm’s church hall in Dad’s Army. The walls prove equally adept, however, at depicting the sisters’ reasonably well-to-do home or, with the addition of some topiary, their garden. All scene changes occur by the performers carrying on the props or moving the walls around, which is perfect because, in keeping with the nature of the plot, it implies that the characters are deliberately creating the scenes in which the action is then to unfold.

The cast is excellent, and by making Don Alfonso the commanding officer of Ferrando and Guglielmo we gain a strong sense of the power that he has over them. Nevertheless, it still seems as if he ultimately manipulates them through force of personality rather than status, and Steven Page proves especially strong in the role. Don Alfonso can be played as a simple trickster, as a cold, scheming presence or as a man with his own axe to grind against women, and there are traces of all three elements in Page’s multifaceted yet balanced portrayal, and his smile during ‘Soave sia il vento’ alludes to so much while ultimately giving away so little. 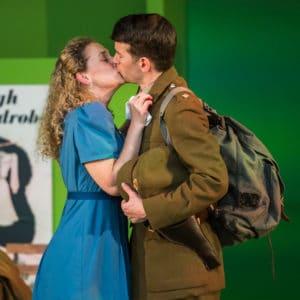 The interactions between the characters are also superb, as illustrated when Fiordiligi sings ‘Come scoglio’. The men’s faces reveal a lot as simultaneously they are pleased that their women are proving so steadfast, frustrated that they have to tolerate Fiordiligi’s reprimand when they ultimately ‘agree’ with her, and yet are still disappointed to discover that they do not actually have the power to attract. At the same time Don Alfonso’s face could either suggest that he is watching nothing he would not expect to see at this stage, or that Fiordiligi is putting up so much more resistance than he anticipated that he is seriously questioning whether he will win the bet.

As Fiordiligi, Kiandra Howarth is possessed of a spellbinding soprano that in its projection of a beautiful, light sound reveals a vast range of nuances. As Dorabella, Martha Jones reveals a rich and rounded mezzo-soprano, and it is noticeable that even as the sisters reprimand the ‘strangers’ she tends to adopt a cheekier, more curious expression in comparison to Fiordiligi’s severely judgmental face. As Ferrando, Richard Dowling displays a beautifully light tenor in ‘Un’aura amorosa’ and proves a fine actor. When the drum beat heralds his departure for war the sadness in his face seems both believable and false, as he knows he must convince the sisters he is leaving when he is actually going nowhere. Ben McAteer similarly reveals a firm and pleasing baritone and presents a strong portrayal of a Guglielmo who thinks rather too much of himself. Dressed as a Land Girl, Soraya Mafi is a marvellous Despina, demonstrating a well shaped soprano and an excellent penchant for comic timing as she runs rings around the others. In ‘In uomini, in soldati, sperare fedeltà?’, as she gives the sisters advice on how to live life to the full, she hands them a mop and bucket as if to suggest that she is exploiting the situation in more ways than one.

The chorus is cut entirely, while Tim Murray’s conducting of the West Green House Opera Sinfonia is excellent. The sound feels very direct, but in the small Green Theatre this works well because Murray can use the music to push the pace while still maintaining balance across the orchestra as a whole. There are some very interesting things happening in his interpretation, and the way in which the sound is frequently increased through the lines of recitative reveals exceptional skill to ensure that tension is maintained and the drama constantly driven forward.

It would be wrong to give the chosen ending away, but it is notable how the one opted for is set up throughout the evening. When the sisters attend to the men after they have ‘poisoned’ themselves Fiordiligi leans over Ferrando and Dorabella over Guglielmo. When the women retreat the men swap places but, on their return, the sisters both head immediately for the person they have just been with, even though they are now on different sides. However, while the ending does include an intelligent step, it is one that accentuates rather than addresses the troubling aspects of the final reconciliation. Similarly, Don Alfonso does little at the end when everything until that point has suggested we will get the answer to what motivated him to set the challenge in the first place. In particular, his final ‘transaction’ with Despina reveals far less than we might have expected given the numerous, albeit ambiguous, hints that are offered throughout the evening regarding their own relationship with each other.

West Green House presented a thoroughly commendable Le nozze di Figaro last year, but this Così fan tutte feels more developed in several ways. While Figaro was presented in English with no surtitles, Così is performed in Italian and this time a broader area across the stage is brought into play. This does not mean, however, that the venue no longer feels intimate, and it is the small scale of West Green House Opera that ultimately makes it the success that it is. If you are only in the habit of venturing as far as the three Gs – Glyndebourne, Garsington and Grange Park – for your summer opera, do consider adding a WG to the mix next year. The gardens, which exist as a visitor attraction all year round, are the best to be found at any venue, the lakeside area is the perfect setting for a picnic on a sunny day, and nowhere could be illuminated better after dark as the water, trees and flowers are all bathed in red, green and white light.