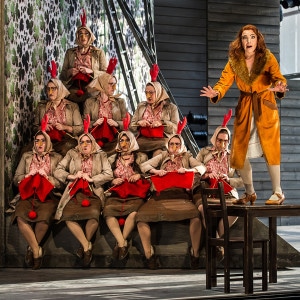 If you don’t know Janáček’s music, then this admirably clear-cut, beautifully sung production is the ideal place to start – but be warned, once you’ve heard those soaring lyrical passages, “Strauss without the stupid bits and Wagner without the interminable histories,” you’ll want more and more, and you won’t be happy until you get your annual Katya Kabanova and Jenůfa fix. Sadly, you’ll be doomed to annual frustration, since most UK houses churn out the usual twaddle instead of giving us more of our beloved Leoš. Ahem. Rant over.

The unique setting of the Opera Pavilion at Wormsley, surrounded by glorious ancient trees, was clearly felt to be enough to suggest the forest, since the set here was minimal, ivy-wallpapered flats sliding open to suggest the woodland glades and shut to reveal the inn where the men pondered their lonely and mostly unfulfilled lives. Compared to Melly Still’s snowy enchantment at Glyndebourne in 2012, Garsington’s might appear rather plain, but it does allow for exceptional focus on the characters, both animal and human. The insects are lightly suggested, and I’m happy to report that the children (from Croydon’s Trinity and Old Palace schools) are delightful rather than cringe-worthy.

There are some great voices here, and for once it’s possible to make that very rare statement – there is not a single weakness in the cast. The stars are Claire Booth’s lustrously sung, radiant Vixen, Grant Doyle’s warm-toned, alluring Forester, Joshua Bloom’s strongly characterized and finely phrased Harašta, and Timothy Robinson’s deeply anguished, gloriously sung Schoolmaster. Any of the top opera houses would be graced by such a quartet of principals. Anyone who heard Bloom’s Don Fernando in Fidelio will not be surprised at the level of his performance, and Doyle’s progress from a merely good Don Giovanni to this rounded, superbly sung characterization, is a joy to see. Claire Booth’s voice might seem a little on the rich side for the Vixen to those used to Helen Field or Lucy Crowe, but those lustrous tones add to the sympathetic characterization. As for Robinson’s Schoolmaster, it’s now impossible to imagine the part taken by anyone else.

Victoria Simmonds sang persuasively and presented an affectionately credible Fox, while Anna Harvey managed to make the randy, flea-ridden Dog appealing; Henry Waddington’s Priest and Aaron Crawley’s Innkeeper added to the sense of melancholy at the Inn, and of course the chorus of Hens were a delight. Garry Walker directed the excellent Garsington Opera Orchestra in a lyrical performance of this enthralling score, Tim Mascall’s lighting constantly enhanced the stage pictures, and Maxine Braham’s choreography poetically evoked the emotions evoked by the dancers.

If there is disappointment to be registered, it might be that one misses a sense of the forest onstage, yet nature played its part in the closing moments in almost as spectacular a way as happened during last season’s Hansel and Gretel – just as the Forester reflects on his youth and the early days of his marriage, the sun set in a mellow, roseate glow. You could not arrange that kind of effect with any production device.