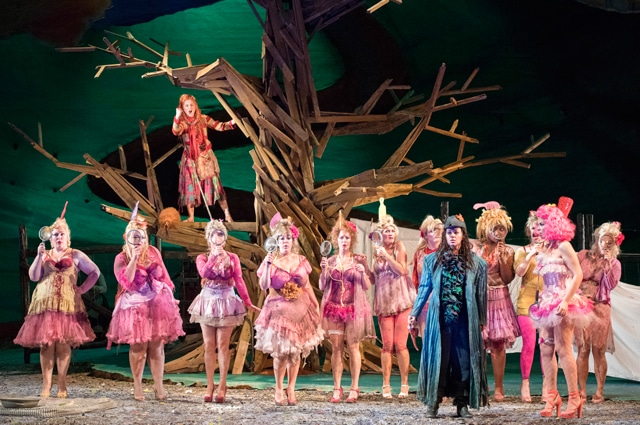 This was one of those Glyndebourne evenings when everything came together: a brilliant production of a masterpiece, astutely cast and sublimely well sung, under the musical direction of a conductor who clearly loves Janáček’s music and is able to communicate that love to an orchestra playing at its peak. Only the grey and drizzly weather failed to match this, but no matter: all the vibrancy of the seasons was onstage, as were the folly and sadness of mankind.

Jakub Hrůša impressed us with his conducting of last season’s Carmen, and here he obtained even more fervent, delicately nuanced, passionate playing from the London Philharmonic Orchestra. Janáček’s evocations of movement, whether woodland creature or human, his challenging of the instruments and his intense emotional ‘sweep’ of sound were all united here in a performance of enthralling power. It’s no surprise that Hrůša hails from Brno and that his family lives on the edge of the forest where the action of this opera is played out. 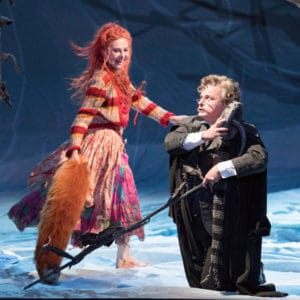 Melly Still’s 2012 production looks as fresh as ever, and the the singing equals it. Listening to, and watching Christopher Purves as the Forester, it was difficult to reconcile him with his Saul of last season, so totally different was the characterization and singing; as he said in an interview, “Who wouldn’t want to sing that final soliloquy?” and he gave it all the sense of awe and tenderness which it needs. Lucy Crowe’s 2012 Vixen was a hard act to follow, but this time Elena Tsallagova, although a very different personality, lived up to the high standard set by her predecessor in the production, with vibrant, richly-toned singing and committed acting.

They were surrounded by an exceptional cast, the most notable being Colin Judson’s world-weary Schoolmaster, Alexander Vassiliev’s Badger and Priest, Alexandre Duhamel’s Harašta, Alžbêta Poláčaková’s endearing Fox, Hannah Sandison’s Cockerel, Natalia Tanasii’s Hen and Natalia Brzezińska’s Innkeeper’s Wife. The last three are members of the Glyndebourne Chorus, as indeed were several others in the cast, which bodes very well for the company. As ever, Jeremy Bines held all the varied parts of the chorus together with his customary aplomb, including a not-too-cutesy band of children.

The production perfectly evokes the contrast between the world of mankind, with its sad, grey moods only occasionally interspersed with joy, and that of the animals, bursting with animation and pulsating with youth and vigour despite the fate of the Vixen (and that of the hens). Tom Pye’s wonderful set, with its fascinating curving ‘fox hole’ entrance, its central oak tree and its simple yet highly evocative ‘inn’ scene, is exquisitely lit by Paule Constable. Dinah Collin’s vibrant costumes and Mike Ashcroft’s fluid, poetic choreography complete an exceptionally satisfying whole.