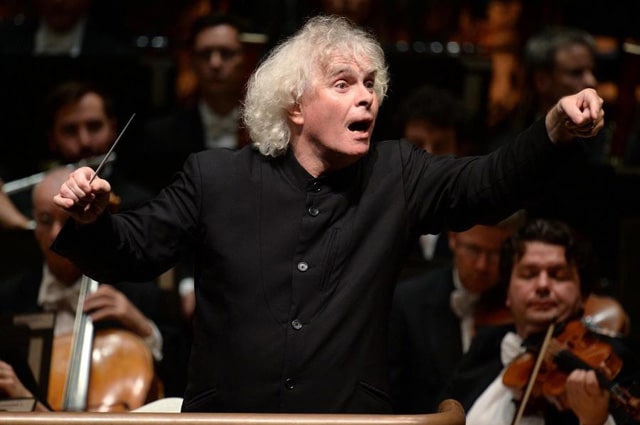 Berlioz’s La damnation de Faust  – part opera, part cantata and all extravagance – is the composer’s adaptation of the best bits of the classic story to incorporate all of the musical tropes of the Romantic era: doomed love; gothic horror; wispy spirits; an ode to nature; angelic choruses; and the odd slice of saucy humour from drunken students. Its programming as the second concert of Sir Simon Rattle’s return to the UK as the LSO’s new Music Director, then, seemed singularly appropriate, as, these days, Rattle, with his flowing mane of white hair and larger-than-life stage persona seems to epitomise the showmanship of Berlioz.

Needless to say, Sunday evening’s performance was a tour de force, in which Rattle – conducting with only brief references to the score – exercised tight but enthusiastic control over the forces on- and off-stage: the LSO, the London Symphony Chorus, the Tiffin Choirs, students from the Guildhall School of Music, and the four soloists. Two wonderfully controlled pull-ups in particular stood out: in the sylvan scene in Part 2, and when the Course d’abîme slowed to a trot in Part 4.

The orchestra was brilliant throughout, providing some magical moments: the lightest of string tones at the opening of Parts 1 and 3; the woodwind’s uncannily accurate representation of a military silver-band for the Marche Hongroise, the dark brooding quality of the opening of Part 2; the perfect Second-Empire sound of muted woodwind and brass, trembling strings and soft timpani for the opening of the Easter Hymn; and just the right touch of the gothic for the terrifying gallop for the Course d’abîme, where Berlioz’s writing is at its most florid, and care needs to be taken not to stray into camp overstatement (it feels as though it needs only the addition of coconut hoof-beats for it to tip into comedy).

The soloists were well chosen (albeit that Gábor Bretz and Christopher Purves were late stand-ins). Bryan Hymel’s voice – alternately ringing Heldentenor and softly lyrical – depicted a Faust that was, by turns, hedonistic and introspective (Merci, doux crepuscule and Nature immense hit the button for youthful poetic fervour); Karen Cargill’s creamy mezzo is always a voice to look forward to, and her Marguerite did not disappoint: Le roi de Thulé and D’amour l’ardente flame – the latter accompanied by Christine Pendrill’s exquisitely played cor-anglais obbligato – were luminously intense. It was unsurprising, then, that the Part-3 duet was a breathtaking play between two perfectly matched voices. Gábor Bretz’s incisive bass provided the right degree of raspy sonority for Brander, but the star of the show was Christopher Purves, whose slightly nasal overtones furnished his voice with a perfect sinister quality for the conniving Mephistopheles. His Une puce gentille was full of dark but lively wit, yet he was equally comfortable with the more dramatic work demanded in the Part-3 trio. Purves clearly inhabited the part, and his small gestures (his crooked finger beckoning Faust; his prurient moue of distaste at the students’ blasphemy; his gesturing at Rattle to keep time in the Dance of the Sylphs) added an extra thrill.

The choirs, too were at the top of their game, tackling the pious profundity of the Easter hymn and the satanic howling accompanying Faust’s last ride with equal verve and accuracy; the  men get the lion’s share of the chorus work, and the tenors and basses of LSC gave us some appropriately bibulous students and well-drilled but mellifluous soldiers. The children’s angelic chorus (sung from the steps around the stalls audience) and the off-stage martial music were nicely judged special effects that added yet another dimension to the drama of a first-rate performance.