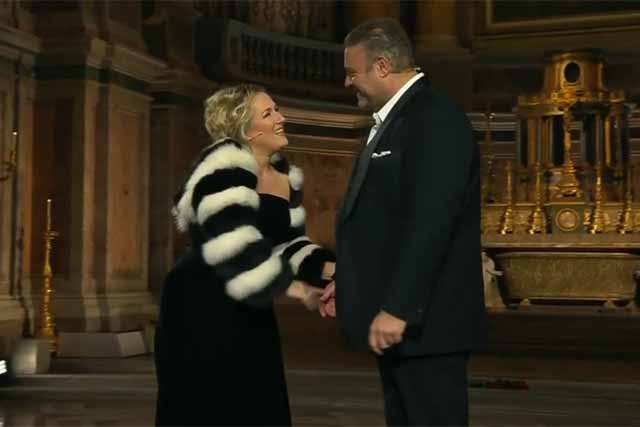 The latest in the series Met Stars Live in Concert , this ‘pay per view’ recital came from the Royal Palace of Caserta, just outside Naples, which must be one of the most stunning settings imaginable, especially for this ‘big bow-wow’ style of music-making by two of today’s most loved opera stars. The Palace is the world’s largest Royal residence: inspired by Versailles and surrounded by fabulous gardens, it was named a World Heritage site in 1997, and was used as a setting in several movies including Star Wars: The Phantom Menace and Mission Impossible III.

Hosted by the soprano Angel Blue and with the always musical and collaborative Roberto Moreschi at the piano, the recital was not one for those seeking rarities, but aimed at pleasing lovers of grand romantic duets and arias. The opening scene from Tosca was performed, appropriately, in the magnificent Rococo chapel of the palace, and the vast space surrounded the lovers with a sense of foreboding. This scene provided what was probably the evening’s best singing, with Diana Damrau the ideal Diva and Joseph Calleja at his best in phrases such as ‘Mia sirena.’

Moreschi’s subtle playing was the chief pleasure of Cavaradossi’s final aria from Tosca, since Calleja tended to make those passionate phrases somewhat too grandiose. Damrau’s ‘Vissi d’arte’ was similarly full-blown, although with this aria that is not automatically a bad thing. Her talents were more emphatically revealed in ‘Bel raggio lusinghier’ from Rossini’s Semiramide, allowing full rein to her fluent, confident coloratura and her bright, appropriately sunlight-filled tone.

“…one of the most stunning settings imaginable…”

Calleja’s ‘La fleur que tu m’avais jetée’ was on the vehement rather than nostalgic side, his unmistakeable vibrato much in evidence. He was shown to much greater advantage in a clip from the Metropolitan Opera’s notable 2011 production of Lucia di Lammermoor, singing ‘Tu che a Dio spiegasti l’ali’ with real italianità and powerful dramatic sensibility.

The recital featured a couple of lollipops including Granada, sung with fervent engagement, and concluded with the Bach / Gounoud Ave Maria, offered as a ‘prayer not to forget the arts.’ Whatever ‘purists’ may think of these concert offerings, they provide welcome reminders that opera is still there in the wings, waiting until the world returns once more to some sense of normality. The concert can be viewed for 10 days on demand, and forthcoming singers in the series include Pretty Yende (November 7), Sonya Yoncheva (November 21) and Bryn Terfel (December 12.)

All details of the Met’s concerts, productions and streams can be found here.