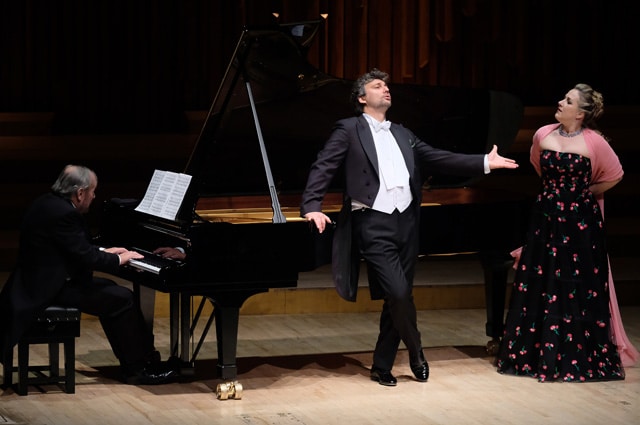 Auch kleine Dinge können uns entzücken… the opening line of Hugo Wolf’s Italienisches Liederbuch – ‘Even small things can delight us’ – is the perfect epigraph to these 46 vignettes of courtship, devotion, anger, loss and reconciliation, set out here as a cycle showcasing the varying moods of lovers in which the soprano is often the coy, coquettish, even waspish one, and the tenor the romantic Italianate lover. The evening felt like a mini opera, with the two singers reacting to one another – theirs is a partnership of some standing (take a look at the YouTube video of them doing Lehar’s ‘Lippen schweigen’ – dance and all) so the style was a natural choice. Some of us might prefer a more traditional ‘Wigmore Hall’ approach to Lieder, but it worked in this context, did not hinder our appreciation of some wonderfully subtle singing, and the audience absolutely adored it.

Helmut Deutsch’s playing was most certainly not a ‘small thing,’ since this peerless accompanist, never ‘too loud’ yet not remotely self-effacing, bound the singers and poems together with the kind of mastery one is only rarely privileged to hear. From matching the intensity of Kaufmann’s ardour in ‘Gesegnet sei,’ to the wonderfully apt piano comment on Damrau’s superbly evoked girl whose lover is too delicate for war in ‘Ihr jungen Leute,’ his playing was a constant joy. His sense of humour, too, brought out the occasional wicked hilarities in Wolf’s compositions, most notably in the virtuoso nachspiel to the final song, ‘Ich hab’ in Penna,’ and the hilarious depiction of a hopelessly inadequate violinist in ‘Wie lange schon.’ Both of these were brilliantly sung by Diana Damrau, whose bright silver tone is the perfect counterpart to Kaufmann’s darker, more naturally sombre sound. 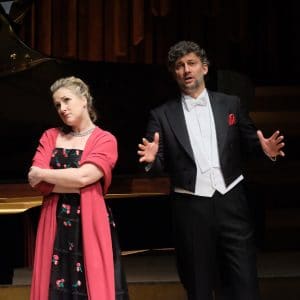 That superb intimacy between voice and piano was heard again in ‘Nun lass uns Frieden schliessen,’ where Kaufmann’s characteristic sweetness of tone and nuanced phrasing were complemented by the gently rocking piano, and in  ‘Benedeit die sel’ge Mutter’ which was presented with absolute simplicity and directness, almost as a hymn to the beloved. ‘Sterb’ich, so hüllt in Blumen meine Glieder’ typifies the atmosphere of the ‘male’ songs in the collection; ‘If I should die, then shroud my limbs in flowers’ might suggest a rather mawkish request but the poem makes clear the lover’s devotion in lines such as ‘Ich sterbe lieblich, sterb’ ich deinetwegen’ (Death is sweet if it is for your sake), and Kaufmann’s diminuendo in the final line was a classic example of his subtle and understated art.

Understatement was not always needed, however, and we heard some entrancing full-blown drama from Damrau in ‘Schwig’ einmal still’ and ‘Wenn du, mein Liebster,’ and from Kaufmann in ‘Wie soll ich frolich sein,’ the impassioned ending reminding us of the tremendous power of this voice. Damrau’s characterization of the hard-to-please girl in songs such as ‘Mein Liebster ist so klein’ was as vivid and memorable as Kaufmann’s impersonation of the besotted lover in ‘Dass doch gemalt all’ deine Reize wären’ with its beautifully shaped conclusion.

An enthusiastic audience would probably have hung around for more encores, but the one given, Schumann’s ‘Unterm Fenster,’ perfectly encapsulated, in duet form, the profound sense of joyful unity which had characterized this recital. Why, they even got lots of laughs – you could have imagined yourself in church during the more sombre songs, but with the lighter ones it was a case of genuine enjoyment rather than the embarrassed mutter one usually hears in such recitals. Singers, pianist and audience, actually joining in merriment? Whatever next?