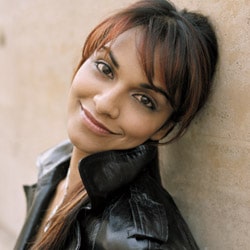 Danielle de Niese can be described in layman’s terms as the Beyoncé of the opera world. Not only is she blessed with movie-star looks but this year she has released her first ‘solo album’, brought bling to the Classical Brits, and can presently be seen around underground stations as the Mostly Mozart poster-girl. It should be added that her classical credentials are considerable, as this Barbican concert aptly demonstrated.

The evening’s programme was unashamedly populist a sort of Now18thC! compilation, in fact but also undeniably beautiful, offering a delectable range of operatic and orchestral confections. It started with Haydn’s Symphony No 70 in D major, one of his earliest symphonic pieces, which set the tone of the evening, beginning with a broad and joyous palette and ending with agitated staccato riffs. La de Niese, looking every inch the diva in a floaty white dress, then cranked this crescendo up several notches with her selection of Handel hits.

‘Endless pleasure’ and ‘Myself I shall adore’, Semele’s most narcissistic arias from the eponymous oratorio, sounded wonderfully fresh and buoyant and, hell bent on seduction, de Niese added all the appropriate winks and pouts. Her soprano has sounded rather shrill in the past but seems to have matured throughout the last year (and therefore since her CD) and whilst the upper range remains a little brittle, in general it sounds smokier and more interesting than before. Less successful was ‘Lascia ch’io pianga’ from Rinaldo, however, which, given its context between the two, couldn’t help but sound bathetic.

Mozart’s Concerto in C major for Flute and Harp offered a brief repose after the interval and an opportunity for another talented young star to shine. Twenty year-old flautist Adam Walker, accompanying Sally Pryce on the harp, gave a quite exceptional performance, with a modesty and poise that seemed well beyond his years. It is to the conductor’s credit that the tempo rarely sounded ponderous or self-indulgent, even during the syrupy second movement; these most delicate of showcase instruments worked together to create a rich and complex tapestry of sound and yet every note was formed like a perfect droplet.

De Niese then returned for the finale: Mozart’s Exsultate, jubilate. A natural stage animal, her delivery remained sexy and soubrettish, which added a certain je ne sais quoi to this hymn to “The Crown of Virgins”, but vocally it was a sensible and impressive performance.

Garry Walker conducted the Academy of St Martin in the Fields.