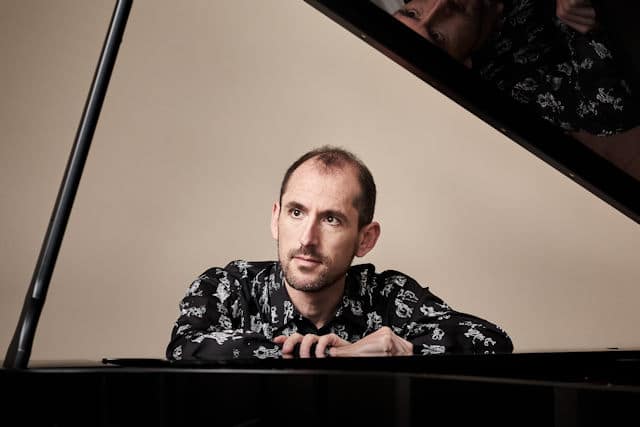 Tuesday evening’s audienceless streamed concert from the Wigmore Hall featured the pianist Danny Driver playing a selection of works with mostly French connections. The choice of theme suited Driver’s flair for subtle changes in mood very well, and this was amply demonstrated in his performance of the sole Debussy work on the menu, Cloches à travers les feuilles, which was given an impressionistic quality in which we heard the cascades of silvery bells and the odd little half melodies filtered through the constant susurration of the leaves.

Fauré’s Op. 73 Thème et variations was described in the introduction as being full of ‘thoughtful intimacy’, and Driver brought this quality to the work in spades. Fauré’s adventures with Schumann’s original theme are never vulgar; tempi and colours may change, but the whole is still painted in watercolours. Driver excelled in bringing us these subtle comparisons from the almost-distracted wandering in the right hand of the first ‘L’istesso tempo’ and ‘Quasi adagio’, through the busy ‘pecking’ of the first ‘Più mosso’, and the genteelly excited ‘Allegro vivo’.

Fauré’s almost Lisztian Op. 63 Nocturne in D-flat was played similarly, as a light-touch exercise in contrasts: its placid opening rocking gave way to some elegantly placed chords, the distancing of which demonstrated just the right degree of rubato. The change in atmosphere came with the more hesitant following section whose almost sinister quality Driver accentuated. The expansive rippling towards the end was so fluid, it brought a sense of calm (akin to Debussy’s rustling leaves), such that the final descent into the quietude of sleep seemed inevitable.

Driver has recently released recordings of all three volumes of György Ligeti’s Études, and will play all 18 pieces at the Wigmore Hall next year. By way of a sampler, Driver presented first-rate performances of two of them: Book 2 No. I (‘Galamb borong’) and Book 1 No. 5 (‘Arc-en-ciel’). The first of these was Ligeti’s essay in summoning the sound of a Balinese gamelan. Certainly, the percussiveness of the ensemble is present through a constant light hammering moving through the hands, but Ligeti seems to ignore the complex relationships between pitch and frequency of sounding that is inherent in this music, and while the melodic material that weaves through the rhythm is interesting (and reminds one of the Debussy – who had a similar fascination for these ensembles), it is very much a Western take on what is usually a more rhythmic, hypnotic experience. The second piece aptly describes the rainbow of its title, the slow, quiet, decorated chord progressions seeming to ascend and descend at the same time, with the piece overall tracing an arc of dynamic.

Mussorgsky’s Pictures from an Exhibition allows the performer a full range of expression in tempo and dynamic. There are challenges, however: for example, Mussorgsky sometimes requires the performer to play heavily and fast, and there is a tendency, in some movements, for performers to sacrifice heft to pace; there were moments – in ‘Baba Yaga’ and ‘The Bogatyr Gates’ – when, sadly, this was the case. Indeed, occasionally, Driver seemed over-speedy: in ‘Bydlo’, for example, we felt that the oxen were galumphing rather than plodding. These examples apart, though, the performance was a good one. ‘The Gnome’ was appropriately angular (with the dissonances of the aciaccaturas sounding spikily), the busy passages in ‘Limoges’ were deftly contrasted, so that one could almost hear individual gossipy voices, the Troubador’s song in ‘The Old Castle’ carried a mossy tristesse, and the ‘Ballet of the unhatched chicks’ contained a comedic extended pause, during which one imagined an egg wobbling slightly.