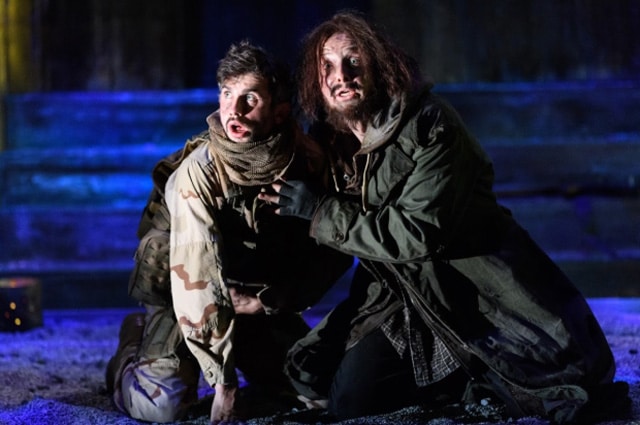 Setting an eighteenth century opera in the modern day risks falling into one of two traps. On the one hand, the chosen setting can demand everything to be so specific that it becomes a job to hammer every aspect of what was geared towards an entirely different era into place. On the other, creating too loose a set-up risks providing insufficient tangible parallels to justify the updating in the first place.

English Touring Opera’s new production of Rameau’s Dardanus, however, avoids both of these pitfalls. This is because the opera’s explorations of war and division seem so naturally relevant to the modern day that no parallel feels forced. At the same time, because it can easily be applied to so many places, there is no need to make the setting specifically Syria or anywhere else. To director Douglas Rintoul, in fact, doing so would have undermined the universality of the opera’s themes.

The evening utilises the same set (by Cordelia Chisholm) that is used for ETO’s current production of Giulio Cesare. This box-like structure of gilded wood creates an enclosed area that, when accompanied by Mark Howland’s lighting, can generate a very dark and repressive space. A large rectangle of earth or sand dominates the stage, and the opening scene, which is set in a mausoleum, sees the boots, clothes and helmets of the dead Phrygian soldiers lie in a tangled heap. Those still alive attempt to separate these so that they can lay each soldier’s belongings out in an orderly fashion to form their tomb. 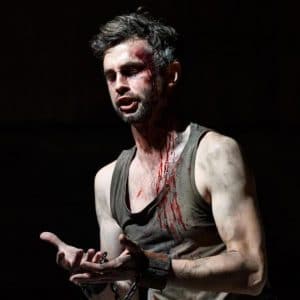 This shows how from the start there is some willingness to bring dignity to both life and death, but the first half of the evening feels dominated by darkness. This is to such an extent that when in Act III the Phrygian Woman appeals for a time of love and peace by donning a pair of wings and producing a bunch of flowers, one can genuinely sense the feelings of relief and release among the performers and audience alike. The fresh flowers stand in such contrast to everything that until then has looked so dead and dark that they remind us of just how far we have hitherto been dragged down one path. It is similar to saying that we accept the world around us as it is, and need reminding that it is in our power to take a different road and change it for the better.

The ending, once peace is restored, sees everyone celebrate in an initially frivolous fashion. They are soon reminded, however, that building a prosperous future requires effort, and so they set about the hard work of rebuilding by cleaning walls and removing fallen columns. At the same time, they do not forget what had to happen to get them to this point and so make a grave for Anténor in order to honour him.

The performance utilises the 1744 version of the opera, thus constituting the first time that this has ever been presented in the United Kingdom. However, the performing version used, which was originally commissioned by the European Opera Centre in Liverpool, also incorporates some amendments that Rameau made during the 1744 run and a subsequent one in 1760. Many factors influenced what should be included, but one was the fact that Enlightenment ideas had taken a greater hold by the time of the later versions, and were reflected in them. In this way, emphasis was placed upon assertions that man is not subject to higher powers and has the ability to change his own destiny because these feel particularly relevant to the modern world.

Jonathan Williams conducts the Old Street Band well, while from among the good cast Anthony Gregory stands out in the title role, delivering strongly in the middle and upper registers despite the substantial demands that the part places on both. Grant Doyle is a firmly voiced Teucer, Galina Averina a beautifully sung Iphise and Timothy Nelson a strong Anténor. Frederick Long is an excellent Isménor, Eleanor Penfold proves radiant as the Phrygian Woman and Venus while Alessandro Fisher is also an effective Arcas.