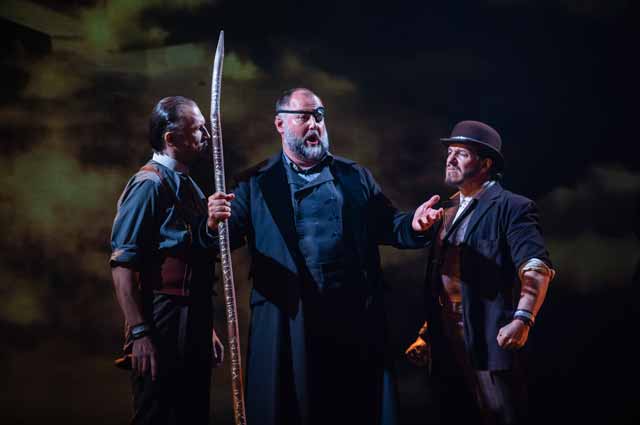 Although this is not the first time that Longborough Festival Opera has produced Der Ring des Nibelungen, 2019 marks the commencement of a new cycle with one opera being staged each year between now and 2022 and the entire tetralogy in 2023. The first instalment Das Rheingold presents the greatest technical challenge of all because it frequently moves between different realms while providing no intervals that might help with executing scene changes. Longborough’s 500-seat theatre also lacks the size to install ascending or descending platforms, but this new production by Royal Opera House Head Staff Director Amy Lane plays on the intimacy of the venue to create a staging that feels immediate and, for the most part, perfectly pitched.

Rhiannon Newman Brown’s set consists of a semi-circle that is raised at the back and slopes down to the ground on either side. This proves a simple but effective way of creating two levels, thus alluding to the multiple levels over which the story unfolds while providing an infrastructure for each scene that enables many details to come to the fore. For example, when Fasolt first insists on receiving the agreed payment he addresses Wotan alone on the upper level, while Fricka (an excellent Madeleine Shaw) and Freia (a sublime Marie Arnet) stand on the one below, thus confirming the former’s previous complaint that the men always negotiate without consulting the women.

More generally, the positioning of characters on and around the semi-circular structure is managed so that typically our eyes are drawn to the few who provide the real epicentre of action at that point, with everyone else maintaining a stiller presence. Certain moments fall either side of this rule though. When Loge (Mark Le Brocq singing and acting his heart out as he is dressed like some modern day counterculture icon) describes what he has learnt on his travels, he is the only animated character as everyone else listens. At the other end of the spectrum, when Wotan refuses to surrender the ring to the giants the staging is so dynamic that it suddenly looks as if the vast majority of characters are about to turn violent before Erda (a splendid Mae Heydorn) appears and instantly calms the situation.

Characters are delineated very well so that the Rhinemaidens (Mari Wyn Williams as Woglinde, Rebecca Afonwy-Jones as Wellgunde and Katie Stevenson as Flosshilde) convey a strong combination of elegance, allure, playfulness and cruelty. Within this, however, we really feel the greater seriousness with which Flosshilde ‘woos’ Alberich, which takes the basic meanness of the other two in leading him on to an entirely new level. Similarly, although the differences in attitude are revealed in the original libretto, these performances draw out the way in which Woglinde and Wellgunde blithely tell the dwarf about the gold while Flosshilde thinks doing so is the height of folly.

The giants are similarly well drawn. Pauls Putnins makes Fasolt seem like a genuinely decent figure who truly loves Freia and who simply entered into an honest agreement, while being willing to work extremely hard, in order to obtain her. The difference between him and Simon Wilding’s Fafner could not be clearer as Fasolt really wishes to have Freia because of his feelings towards her, while his brother aims to deprive the gods of their lifeblood, and early on they almost come to blows regarding their differing motives. The giants are initially wheeled on perched on stepladders before descending from these, which is clever. It not only marks out their trade as builders, but gives them the impression of greater height before allowing them to interact on a very ‘human’ level with the other characters. Their differing costumes also reveal their respective characters as Fasolt feels like an honest artisan while Fafner’s bowler hat and jacket highlight his own aspirations and, by extension, sinister intentions. Given all this, it seems just a shame that Fafner’s killing of Fasolt, which does follow Wagner’s original directions of felling him with a single blow, feels just a little underwhelming in its execution.

Darren Jeffery sings Wotan’s ‘Abendlich strahlt der Sonne Auge’ extremely well while Mark Stone, with his powerful baritone, arguably produces the strongest singing of the evening as Alberich. Their performances together reveal how the two characters are cut from the same cloth, so that when Wotan takes the ring from Alberich both end up lying on their backs, albeit one in triumph and the other in despair. In fact, it is telling that prior to this Wotan casts his spear aside to wrestle the ring from Alberich’s finger as if to reveal how he is breaking his own rules of operation in stealing it. More generally, this Wotan’s response to each of Alberich’s attacks is to laugh and sneer before moving on to contemplate the gravity of what he has said.

The most intriguing relationship of all, however, is between Wotan and Loge, because it feels so ambiguous. There are times when each chooses to assert or give way, so that when the pair first meet Alberich and he asks them ‘Was wollt ihr hier?’ (What seek ye here?) Loge looks like he is about to answer, but steps aside when Wotan pushes himself to the front. Then while Alberich is transforming into a dragon Loge and Wotan are clearly discussing their next steps. This does not mean that they enjoy an easy relationship, and when Loge sings ‘Ihrem Ende eilen sie zu’ he enters especially, almost as a compere might, thus emphasising his detachment from the gods as he comments on their situation. However, just before the very end he shakes Wotan’s hand in a gesture that may be ironic from his point of view but does highlight the complexity of their relationship. Adrian Dwyer also puts in a highly notable performance in the small role of Mime, while the excellent conducting of Anthony Negus ensures that musically the evening is on a very sure footing from start to finish.

Overall the staging succeeds in providing a number of insights while telling a very clear and understandable story. For example, we are presented with a dystopian, verging on hellish, vision of Nibelheim, but it is still clear that the mining of gold lies at the heart of the society now, unlike many productions that seem to put the emphasis on laboratories or experimentation. We can also really see where the ring is, and who it is passing to, at every stage, which is not always the case. In this way, Wagner’s original words and directions are followed very closely so that Alberich sings ‘entreisse dem Riff das Gold’ (I wrest from the rock the gold) and then does exactly that because the treasure is sitting in the ‘right’ place to begin with. As a result of the attention that is generally shown, however, the few slip-ups in this area do stand out. After Freia has been released back to the gods Fasolt takes the ring directly from the pile of gold so that he already possesses it at the point at which his words to Fafner imply that he wants, rather than has, it.

The final element that helps make the evening feel special is the use of graphics. A framed screen stands at the back of the stage, upon which Tim Baxter’s video designs prove immensely skilful. For example, at the start they convey in turn the fluidity of the Rhine and the shimmer of the gold in its waters. In Nibelheim we can actually see the Nibelungen toiling away, and every now and then scenic views are replaced by a smashed pane of glass to highlight the way in which various plans are going awry.

Valhalla itself is glimpsed on this backdrop as some brutal modernist building, which works because, although that particular style did not exist in Wagner’s lifetime, it still alludes to the capitalist world that he saw around him and was commenting on. During the final scene more and more storm clouds come across it, with the amount to which the fortress is obscured depending on how out of reach it feels at the time. A rainbow bridge is seen leading up to it at the end, but it is understandable that this venue, like most major opera houses in fact, could not find a way of showing the gods actually crossing it. This production, however, makes a virtue out of a vice by having the gods stare outwards at the end while Wotan is bent double as if his fear, shame and desire to hear more from Erda mean that he cannot even bring himself to make the crossing. In this way, the greatest surprise is left right until the end as behind the gods we see a rainbow above Valhalla being consumed by fire. It is as if Loge is, metaphorically at least, fulfilling the desire he has just expressed to burn up the whole lot of them, but it also alludes to the very end of the gods, even if Longborough’s own Götterdämmerung is still three years away.

Longborough Festival Opera’s 2019 season continues until 3 August. For details of all events and to book tickets visit the designated website.