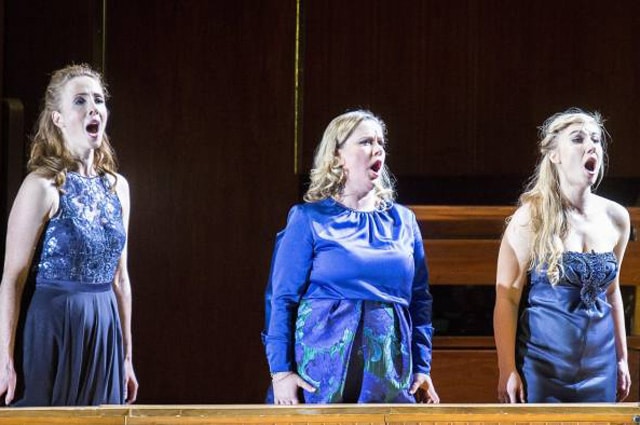 This performance of Das Rheingold heralded the start of the London Philharmonic Orchestra’s presentation of Der Ring des Nibelungen over four seasons, and constituted a gala evening to mark the tenth anniversary of Vladimir Jurowski becoming the orchestra’s Principal Conductor in 2007.

Officially the performance was semi-staged, but in one respect the determination to make it so did it a disservice. In the Royal Festival Hall the soloists performed mainly from the choir stalls behind the orchestra, although Alberich initially appeared on the stage before climbing up to reach the Rhinemaidens. Positioning the singers here as opposed to the front of the stage provided them with a larger performance area, but also gave them a far greater space over which to project. Many managed well, but placing them in front of the orchestra would have enabled everyone to shine, and ensured that those vocal passages that really need to hit us were suitably overwhelming. As it was, it felt as if these great characters were, visually as well as musically, being reduced to tiny figures in the distance, and the approach might need to be reconsidered for Die Walküre (in January 2019) when half an act can involve just two characters.

If one could get over this point, however, the stagecraft was highly intelligent. The characters were placed at different points around the stalls but in such a way as to highlight various groupings, and draw the eye towards whoever was most important at the time. Characters often sat as observers when on the sidelines, while Donner and Froh were both cleverly brought to the centre for their respective solos as the gods prepare to cross to Valhalla. The thoughtful positioning and subtle reactions of the other cast members also enabled Mime, for example, to deliver his ‘soliloquy’ outwards while still giving the impression that he was addressing Wotan and Loge.

As a rule, the gods occupied one side of the choir stalls and the giants the other, so that figures from either side of the divide might advance as far as the centre but seldom beyond it. However, when Fasolt and Fafner exited with Freia, Donner and Froh followed them for a distance, which ensured that for the next section where only the gods are present they were spread more evenly across the stalls. 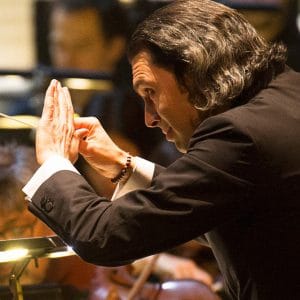 Some of the moves were exceptionally strong. When Loge first appeared he had to pass by the giants who were seated either side of Freia. What, however, might have appeared clumsy worked brilliantly as Freia stretched out her arm showing how she looked to the demigod for her ‘salvation’. When Alberich put on the tarnhelm the results were excellent. When invisible he ‘disappeared’ under shadow, which told us both that he was there and that he could not be seen. It was a trick that could have been used in a full production, and was more effective than simply seeing him hide behind something. Loge’s reaction told us that the dwarf was a fearsome dragon even though we saw nothing for ourselves, while as a toad he simply crouched down and tilted his head. The killing of Fasolt was also highly effective as Fafner forced him to the side before dealing the fatal blow so that the giant collapsed out of sight. Then Fafner simply dragged the body through the door as he subsequently exited.

Other moments were less successful although most of these derived from the fact that this was not a fully staged performance. When Donner and Froh burst on to prevent Fasolt and Fafner from taking Freia, they were unable to maintain a sense of direct confrontation right up until the moment when Wotan expressly orders them to stop. Similarly, the ending simply saw Loge exit the choir stalls so that the final music ended up signifying the demigod’s contempt rather than the gods’ triumph as they ascend to Valhalla. Many productions highlight, and indeed the music describes, both as it is such a hollow and Pyrrhic victory, but this ending pushed things too far in one direction. It may have been deemed too facile to have the gods walk across the stalls, but if the decision was to let the music speak unimpeded it did not do so because what we did see still placed a slant on it.

Jurowski elicited extremely balanced, radiant and beautiful playing from the LPO, and if one were assessing this simply as an effective rendering of a score it would be hard to fault. However, it did not always get under the skin of Wagner’s music so that the opening in E flat major did not really capture the infinite flow of the Rhine, or the sense of a primordial sound rising from the depths of the water. Similarly, the giants’ leitmotif that heralded their entry felt so forthright that paradoxically it failed to convey the underlying threat and menace posed by the race.

From among the cast the best performance arguably came from Robert Hayward who for many years was English National Opera’s Wotan. Here he played Alberich and, while asserting his strong bass-baritone, got inside the character so much that we saw the similarities between him and the chief god, and felt more sympathetic towards him for actually committing the lesser crime. Equally impressive, however, was Adrian Thompson in the far smaller role of his brother Mime. The giants worked well together with Matthew Rose’s more vocal but gentler Fasolt contrasting nicely with Brindley Sherratt’s quieter menace as Fafner. Another dream pairing came in the form of Allan Clayton as Froh and Stephen Gadd as Donner, who both left us lamenting the fact that the parts are not bigger.

Michelle DeYoung was a suitably haughty Fricka, Lyubov Petrova a class act as Freia and Anna Larsson an intriguing Erda. Meanwhile, Sofia Fomina, Rowan Hellier and Lucie Špičková blended very well as Woglinde, Wellgunde and Flosshilde respectively. Vsevolod Grivnov did not initially seem to have the most pleasing sounding tenor, but he made it suit the part of Loge very well and his acting was extremely assured and engaging. Unfortunately, the same could not be said of Matthias Goerne who alone among the principals sang from a score and came across as very withdrawn from the proceedings. Assessed strictly on his vocal output one could still be complimentary, but, no matter the weakness of his position, the character of Wotan must provide a strong centre to the opera, and Goerne’s failure to do so undermined the whole experience.