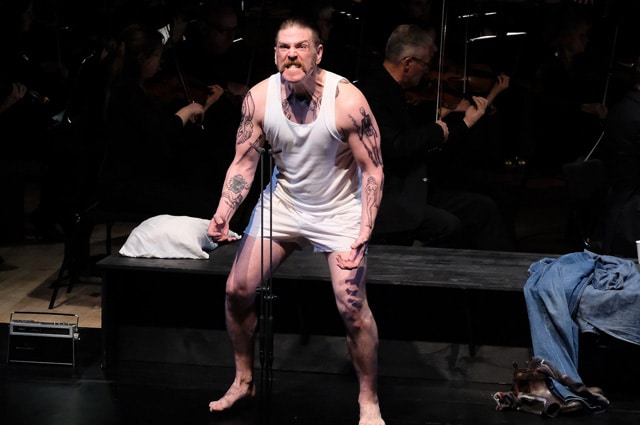 Tuesday evening saw the UK première of a semi-staged production of Jake Heggie’s opera Dead Man Walking at the Barbican, as part of the ‘The Art of Change’ season. It is a shamefully delayed première, as the piece was first performed at The San Francisco Opera back in 2000, and has had over 60 stagings world-wide to great acclaim. And little wonder: a tour-de-force of a piece, it was Heggie’s first essay in the genre; setting a first-class libretto by Terrence McNally, adapted from Sister Helen Prejean’s account of her difficult relationships with prisoners on Death Row in Louisiana – in the opera, all condensed into one composite character, the double-murderer Joseph De Rocher.

Heggie’s background in musical theatre is evident in his writing – gloriously opulent orchestration that gives us, by turns, romanticism, spikiness, the jazz age, and a satisfactory fusion of Rodgers, Gershwin and Bernstein. All of this was handled with supreme skill by the BBC Symphony Orchestra under Mark Wigglesworth. 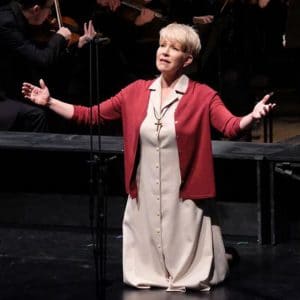 The work contains some moving set pieces. The Finchley Children’s Music Group play the children at Sister Helen’s school, and their sweet recitation of Heggie’s authentic-sounding Spiritual ‘He will gather us around’ early on in the opera sets up the innocence of this recurring leitmotiv. The prisoners’ ‘Woman on the tier’, was sung with a menacing sexuality by the men of the BBC Singers that brought to mind Clarice Starling’s visit to Hannibal Lecter. ‘You don’t know’, the first-act sextet between Sister Helen, the parents of the murdered teenagers and De Rocher’s mother, gave a perfect demonstration of how opera can set concurrent monologues (in this case, the parents’ desire for vengeance, De Rocher’s mother’s mistaken belief in her son’s innocence, and Sister Helen’s attempts at resolution). The first-act finale’s vast, loud exercise in counterpoint pulled together themes from the whole cast. Prison menace continued in Act Two with the up-tempo-Gershwin-influenced number ‘Dead Man Walking’, set in contrast to the sublimely moving close of the opera, after De Rocher’s execution, which left Sister Helen singing ‘He will gather’ without accompaniment.

With a line-up of such first-class singers, vocal delivery was consistently excellent. Joyce DiDonato, reprising the role of Sister Helen, displayed a magnificent range of emotions, capturing frustration, piety, simplicity, anger and, above all, humanity. Michael Mayes’ De Rocher was simply splendid, his edgy baritone portraying brittle brutality through whose cracks the vulnerability of a confused child emerged. They were ably supported by a large cast of principals including Maria Zifchak Susan Bullock, Toni Marsol, Susan Bickley, Mark Le Brocq and Measha Brueggergrosman.

There has been much discussion as to whether Heggie’s music-dramas are operas or musicals, but Dead Man Walking is perhaps best described as ‘a book set to music’, and therein lies some of its slight musical disappointment. It is heavily dialogue-driven. Heggie is clearly a master of melody and sumptuous accompaniment, and there are some moments where this shines through, such as Mrs De Rocher’s soliloquy ‘Joe, my Joe,’ the duet in Act Two between Sister Helen and Sister Rose and De Rocher’s remembrance of his childhood. Not a few of the lines (such as Sister Helen’s ‘Only God knows’) hold the hint of a soaring tune, but the need to push on with the text (and its changing moods) quickly stifles melodic development. One longs for an ‘aria’: a space where plot and dialogue are forgotten, and the orchestra and singer can wallow in an old-fashioned, formally constructed song. As it is, while the piece is hugely enjoyable, you are left feeling that the evening consisted of more than its fair share of lushly and inventively accompanied recitative.