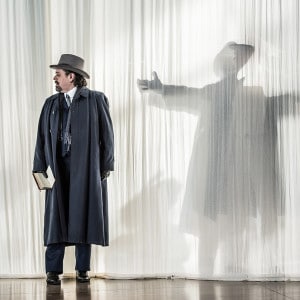 Presenting “ambiguous Venice” as the “half fairy tale, half snare” described by Thomas Mann, and with musical direction by the conductor who not only worked on the piece with the composer but gave its first performance, this production of Death in Venice is unmissable.

Britten knew that this was to be his final opera, and as well as being a testament to “everything that Peter and I have stood for,” it was his last chance to create a major role for Pears. Inevitably, any tenor taking it on faces comparison with him and with great successors such as Anthony Rolfe Johnson: Paul Nilon was at that level in every way. He suggested Aschenbach’s fastidiousness, his quest for “Lofty purity” and his anguished realization of what has happened to him at the Lido, in singing of mesmerizing clarity and power of expression. Above all, Nilon was able to show what Ian Bostridge has called “…the perilous dignity of the acclaimed artist” both in his first act statements about his art and his final, shattering moments.

He was surrounded by a fine cast, with William Dazeley in outstanding voice as an unctuous Hotel manager, ominous Gondolier and obsequious Barber amongst his many roles. Tom Verney’s elegant counter-tenor sounded a little on the dry side for Apollo although his assumption of the part was persuasive, and Joshua Owen Mills and Henry Manning both gave confident and stylish performances as the Hotel Porter and English Clerk respectively.

Paul Curran’s production, with muted, delicate designs by Kevin Knight and evocative lighting by Bruno Poet, avoids the danger of too ‘Southwold’ a feel in its depiction of the Lido, and gives us hints of the incomparable city and what Thomas Mann called “that landing-place that takes the breath away.” It’s a vision which focuses very firmly on the central character, emphasizing his solitary nature and his ‘otherness’ from his fellow guests, with particularly marked distinctions between the seemingly impenetrable family around Tadzio, and Aschenbach’s tortured, isolated artist. The tight division of the city into its sestieri was perhaps the inspiration for the gauzy white curtains which are used to conceal or reveal the sections of the narrative, but they often proved a distraction in use.

The choreography by Andreas Heise was often stunning, and performed by an exceptional group of dancers, with Celestin Boutin’s athletic Tadzio and Georgie Rose Connelly’s lithe Governess especially eye-catching. The “Strolling Players” scene had a bit more to it of the ‘Venice’ in Las Vegas than the real thing, but it was colourfully entertaining and the ideal contrast to the inner turmoil going on in Aschenbach’s mind.

The Garsington Opera Orchestra provided inspired playing under Steuart Bedford, as alive to every nuance of the score as you would expect. The Percussion section and the Harp (Sue Blair) gave particular pleasure, and the music’s combination of intimacy and grandeur was superbly conveyed. In a letter to Pears, Britten asked the tenor “What have I done to deserve such an artist and man to write for?” and received the reply “…it is you who have given me everything, right up to this great Aschenbach… I am here as your mouthpiece and I live in your music.” Steuart Bedford’s mastery of Britten’s score and Paul Nilon’s singing are fitting tributes to the composer and the creator of the central role of Death in Venice.