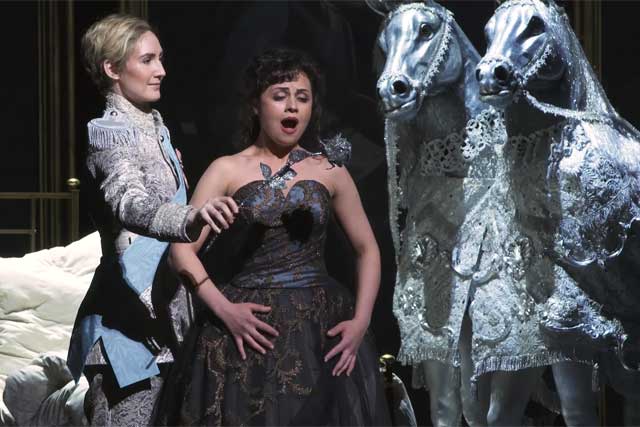 When the much-loved ‘old’ production from the Munich State Opera was first shown, most of the present cast of this new one had not been born. It’s appropriate then, that Time is a central image of the staging, just as it is a major theme of the opera itself. The character who seems to guide the proceedings in this Barrie Kosky production is a kind of conflation of Old Father Time and ‘Pity, like a naked new born babe’; the visual image also recalls Nicolas Poussin’s A Dance to the Music of Time, which is also referenced in one of the production’s most striking scenes, where the other characters dance around Sophie. Orchestrally, the original score was eschewed in favour of the reduced version by Eberhard Kloke, yet as listeners in front of the TV we sensed no diminution of either drama or poignancy in the music; indeed, Vladimir Jurowski coaxed a poetic, nuanced performance from the players, gently supporting the singers and pointing up the most emotional moments.

Kosky’s attention to detail is well known, and this extends to the personenregie which is of an impressive quality here, and which in turn leads the singers to give rounded portraits of these characters and their conflicts. The ‘Rosenkavalier’ was sung with luscious tone and acted with noble bearing by Samantha Hankey, who showed just why she was the winner of the Glyndebourne Opera Cup. Katharina Konradi is not your usual nervous, passive Sophie but a bundle of energy, her singing as fluent and expressive as her acting. Marlis Petersen is well known for her Salome and her Lulu; this was her role debut as the Marschallin, and it is certainly a mature interpretation, with perhaps a little too much of an ‘edge’ for this luscious role. 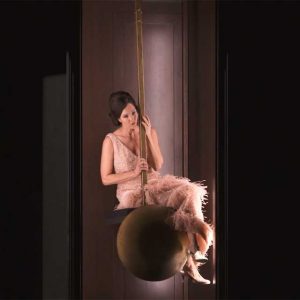 Christoph Fischesser is a youthful, somewhat twitchy Ochs, his singing at times a little under-powered yet always musical. Johannes Martin Kränzle is familiar to audiences in the UK for his superb Beckmesser, and here he presented a deeply sympathetic Faninal, sung with the expected authority. Ursula Hessen von den Steinen gave a characterful account of Annina alongside Wolfgang Ablinger-Sperrhacke’s wonderfully slimy Valzacchi, and Daniela Köhler made a strong impression as Sophie’s chaperone.

“…Vladimir Jurowski coaxed a poetic, nuanced performance from the players…”

The design, by Rufus Didwizsus, rejects the usual Viennese swags and drapes, focusing instead on a dreamily grey/steel backdrop which somehow manages to echo tradition whilst being entirely fashionable. This is contrasted with walls adorned with paintings, and some influences from Henry Fuseli.

The highly symbolic clock dominates many scenes, reminding us of ‘Time’s winged chariot’ and the striking stage pictures of the silver coach and pair, and the wonderful Rococo staging of the Italian tenor’s aria (mellifluously sung by Galeano Salas) are testament to this designer’s impressive collaboration with the director. Once you’ve seen this production it will be difficult to imagine ‘Di rigoro armato il seno’ done in any other way than with resplendent Rococo colour and meticulously stylized dance steps, and as for that enormous silver coach, with glittering plumes and very animated horses – once this show goes ‘live’ it will bring the house down. Victoria Behr’s beautiful costumes and Alessandro Carletti’s atmospheric lighting were integral parts of this impressive production.

The scene at the ‘Inn’ was certainly a departure from the norm, and all the better for it. An authentic looking auditorium dominates the rear of the stage, and reminds us that we are often onlookers as our futures enfold before us. The Mariandel / Ochs interchanges were far less embarrassing than they usually are, and the various accomplices were judiciously directed. Old Father Time took up his position in the Prompt Box, eventually retreating as the youthful pair sing of their love. The final trio was as heart-wrenching as it ought to be, and both Faninal’s ‘Sind halt aso, die jungen leut’! and the Marschallin’s ‘Ja, ja’ were unaffectedly moving.

The performance can be streamed here.