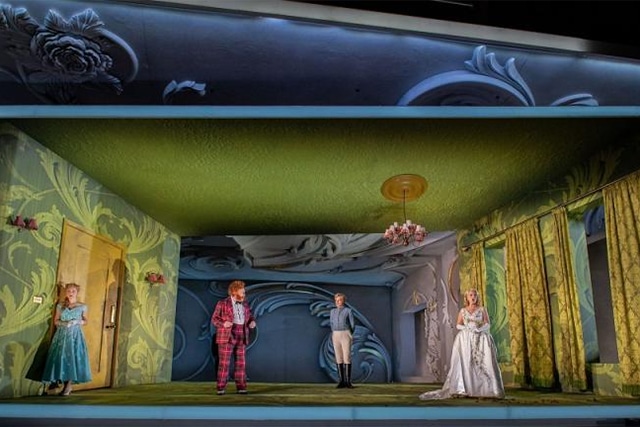 The director Bruno Ravella said in a recent interview, that “Closer to my heart are the themes dear to Hofmannsthal – the metamorphosis through love, and its mystery, the degradation that time brings to all things.” In this literate, witty and at times overwhelmingly emotional production of Der Rosenkavalier, Ravella held the two strands of sorrow and joy together with such persuasiveness that it felt as though all the other recent productions had been leading up to this culminating perfection. As always with this director, characterization is explored in depth and such issues as class and evanescence are informed by detailed research; there are no trashy gimmicks, and no overweening symbols, unless you count the roses which garland and perfume so many scenes.

An outstanding cast had been assembled for the production, led by Miah Persson’s patrician, elegant yet vulnerable Marschallin. Flaubert’s lines in Sentimental Education – “…She was approaching the August of a woman’s life, a period which combines reflection and tenderness… the whole being overflows with a wealth of harmony and beauty” might have been written for this warmly sympathetic characterization. Expectations were high after Persson’s noble Countess in Capriccio at Garsington in 2018, and they were exceeded. The stratospheric heights of the music held no terrors for her silvery, shimmering soprano, and she looked divine in all those covetable costumes.

One scene must suffice to demonstrate both the director’s insight and the soprano’s sensitivity; as the Marschallin contemplates her fate, she inhales the perfume from the silver rose on a tiny handkerchief, and it is as if her response to this sums up all her bittersweet feelings. There were many moist eyes in the auditorium at the close of Act I.

The rest of the cast had their work cut out to match her, but they succeeded. Hanna Hipp’s Octavian looked authentically boyish and had the exact bearing of a young aristocrat: her singing was intensely expressive, and the Presentation of the Rose can seldom have been bettered. As for Madison Leonard’s Sophie, who could not fall in love with that smile? Away with those weedy, reedy sopranos – here was the real thing, able to fill out the phrases without strain and infusing every note with joy. 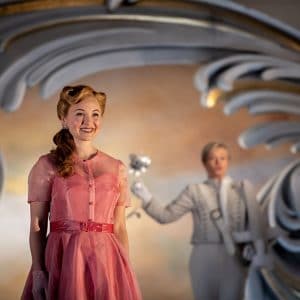 Derrick Ballard’s Ochs was amusingly bumptious rather than sinisterly boorish, and his singing was superb – always musical and sonorous whilst revealing the entitled character beneath. Richard Burkhard’s Faninal was a more sympathetic figure than usual, his aspirations more sad than contemptible, and his singing nobly rather than ingratiatingly phrased. Rebecca von Lipinski was luxury casting as Faninal’s ‘employee’ Marianne Leitmetzerin – this former Leonore in the Garsington Fidelio made much more than is usual of this role, her attempts to excuse Ochs’ behaviour quite hilarious.

Kitty Whately presented a gloriously bitchy gossip, Colin Judson a delightfully slimy Valzacchi, and Alexander Aldren’s Innkeeper was a shimmering vision in snake-like green, his obsequiousness never failing to delight. Julian Close revealed a striking voice in the role of commissar of police, and the various footmen and major-domos were wittily characterized. Leopold, usually seen as a straw-chewing bumpkin, was here presented as a reluctant scion of the Ochs clan, and played with floppy-haired charm by Timothy Blore.

“…this literate, witty and at times overwhelmingly emotional production of Der Rosenkavalier… felt as though all the other recent productions had been leading up to this culminating perfection”

The Italian Tenor was presented as a street singer / flower seller, his voice heard through the open window; not only the Marschallin but all the other characters onstage paused to listen to this outpouring of love – it was as though time had stood still for those moments. The role was passionately sung and very finely phrased by Oliver Johnston.

The Garsington Opera Chorus sang gloriously and lent themselves happily to all their roles, and the Children’s Chorus declared their cries of ‘Papa! Papa! Papa’ with great enthusiasm – Ochs would have to have been exceptionally prolific to have sired this energetic lot. George Nearn Stuart was a winsome Cupid, slyly observing the lovers at crucial moments and flourishing a final, single rose.

The reduced score ‘for middle-sized orchestra’ by Eberhard Kloke may not have produced the sweeping, pulsating sound which we are used to in this music, but Jordan de Souza and the Philharmonia Orchestra contrived to make that seem unimportant, with exceptional sympathy given to the singers and exquisite phrasing in the exposed, intimate moments and no lack of ‘schwung’ when required.

The director had obviously worked closely with Gary McCann and Malcolm Rippeth in the design and lighting, and those palaces have never looked so fresh and alluring. The all-silver boudoir of the first scene, the sickly green of the Inn and Faninal’s new palace – a copy of the Marschallin’s but with added golden swirls, a very neat touch – were all unified, and the ‘set pieces’ – the Presentation of the Rose, the Act III entrance of the Marschallin – were shown with spectacular coups de Théatre. No apologetic creeping up here, and no side-entrance for the major character either, instead all as full-blown as they ought to be.

As Bruno Ravella has said of Der Rosenkavalier, “The relationships are so fascinating, the comedy so intertwined with the pathos and the drama, that it is hard not to love it.” This production succeeds in revealing all the work’s facets, and it deserves to become a classic.

Further details of this production can be found here.